The Delaware River Port Authority (DRPA), officially the Delaware River Port Authority of Pennsylvania and New Jersey, is a bi-state agency instrumentality created by a Congressionally approved interstate compact between the governments of Pennsylvania and New Jersey. The authority is principally charged to maintain and develop transportation links between the two states with four bridges, a ferry, and a mass transit rail line across the Delaware River. Though the DRPA has "port" in its name, it does not own or operate any ports.

In 1919, Pennsylvania and New Jersey legislatures approved the creation of the Delaware River Bridge Joint Commission. The first meeting was held on December 12, 1919, with commissioners from both Pennsylvania and New Jersey. On July 1, 1926, the first bridge opened before a crowd of over 25,000 people. It was named the "Delaware River Bridge," and following the ceremony, over 100,000 people participated in the inaugural walk. United States President Calvin Coolidge came the next day to dedicate the bridge. However, there was thought that there should be a regional governing body for a port authority, and also the construction of another bridge and a high-speed rail line. And so, on July 17, 1951 United States President Harry S. Truman signed a bill, which created the Delaware River Port Authority. In 1953, construction started on a new bridge to connect South Philadelphia and Gloucester City. In 1955, the existing bridge was renamed Benjamin Franklin Bridge while the name Walt Whitman Bridge was approved for the new bridge which would open in 1957. By 1966, two more bridges were approved; the Commodore Barry Bridge (opened February 1, 1974) and the Betsy Ross Bridge (opened April 30, 1976). In 1974 and 1990, the Ben Franklin Bridge and the Walt Whitman Bridge carried their one-billionth vehicle, respectively.

In 2011, DRPA ceased operating the Philadelphia Cruise Terminal. In 2015, DRPA sold the RiverLink Ferry to the Delaware River Waterfront Corporation and the Cooper's Ferry Partnership.

The 16 commissioners also serve as the board of directors for the Port Authority Transit Corporation or PATCO, a DRPA subsidiary. 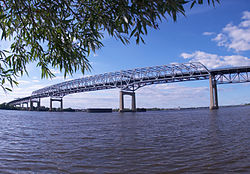 The most heavily traveled of the four bridges, the Walt Whitman Bridge connects South Philadelphia to Gloucester City, New Jersey. It carries Interstate 76, also known as the Schuylkill Expressway. For passengers going to Pennsylvania from New Jersey, it sees its heaviest volume traffic during sports contests, as the South Philadelphia Sports Complex is at the foot of the bridge. For passengers going into New Jersey from Pennsylvania, it sees its heaviest volume traffic from Memorial Day Weekend through Labor Day, as the Walt Whitman provides direct access to the Atlantic City Expressway, and thus to shore points in South Jersey, where many Philadelphia-area residents have shore houses, or go for a day trip.

The first completed bridge out of the four (opened in 1926), carries U.S. Route 30 and Interstate 676, as well as the PATCO Speedline. The bridge connects Camden, New Jersey with Center City, Philadelphia. It held the position of the World's longest suspension bridge from 1926 to 1929, until being surpassed by the Ambassador Bridge.

The youngest of the four bridges (opened 1976), it connects the Bridesburg section of Philadelphia to Pennsauken. It carries New Jersey Route 90. Upon arriving in Pennsylvania, it has a direct intersection with I-95.