This article is about the effects of pre-existing diabetes upon pregnancy. For temporary diabetic symptoms as a complication of pregnancy, see Gestational diabetes. 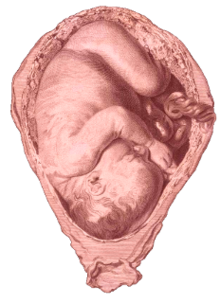 For pregnant women with diabetes, some particular challenges exist for both mother and child. If the woman has diabetes as a pre-existing or acquired disorder, it can cause early labor, birth defects, and larger than average infants.

When type 1 diabetes mellitus or type 2 diabetes mellitus is pre-existing, planning in advance is emphasized if one wants to become pregnant, and stringent blood glucose control is needed before getting pregnant.

During a normal pregnancy, many maternal physiological changes occur and there is an increase in insulin needs due to increased hormonal secretions that regulate blood glucose levels, glucose-'drain' to the fetus, slowed emptying of the stomach, increased excretion of glucose by the kidneys and resistance of cells to insulin.

Risks for the child

The risks of maternal diabetes to the developing fetus include miscarriage, growth restriction, growth acceleration, fetal obesity (macrosomia), mild neurological deficits, polyhydramnios and birth defects.In some studies 4% to 11% of infants born to type 1 diabetic women had defects compared to 1.2% to 2.1% of infants born in the general population. The cause is, e.g., oxidative stress, by activating protein kinase C that leads to apoptosis of some cells. A hyperglycemic maternal environment has also been associated with neonates that are at greater risk for development of negative health outcomes such as future obesity, insulin resistance, type 2 diabetes mellitus, and metabolic syndrome.

During the first trimester, besides increased birth defect risks, having a miscarriage is also increased due to abnormal development in the early stages of pregnancy.

When blood glucose is not controlled, shortly after birth, the infant's lungs may be under developed and can cause respiratory problems. Hypoglycemia can occur after birth if the mother's blood sugar was high close to the time of delivery, which causes the baby to produces extra insulin of its own.

Mild neurological and cognitive deficits in offspring — including increased symptoms of ADHD, impaired fine and gross motor skills, and impaired explicit memory performance — have been linked to pregestational type 1 diabetes and gestational diabetes. Prenatal iron deficiency has been suggested as a possible mechanism for these problems.

Birth defects are not currently an identified risk for the child of women with gestational diabetes, since those primarily occur in the latter part of pregnancy, where vital organs already have taken their most essential shape.

Blood glucose levels in pregnant woman should be regulated as strictly as possible. Higher levels of glucose early in pregnancy are associated with teratogenic effects on the developing fetus. A Cochrane review published in 2016 was designed to find out the most effective blood sugar range to guide treatment for women who develop gestational diabetes mellitus in their pregnancy. The review concluded that quality scientific evidence is not yet available to determine the best blood sugar range for improving health for pregnant women with diabetes and their babies.

During the first weeks of pregnancy less insulin is required due to tight blood sugar control as well as the extra glucose needed for the growing fetus. At this time basal and bolus insulin may need to be reduced to prevent hypoglycemia. Frequent testing of blood sugar levels is recommended to maintain control. As the fetus grows and weight is gained throughout the pregnancy, the body produces more hormones which may cause insulin resistance and the need for more insulin. At this time it is important for blood sugar levels to remain in range as the baby will produce more of its own insulin to cover its mother's higher blood sugar level which can cause fetal macrosomia. During delivery, which is equivalent to exercise, insulin needs to be reduced again or hyperglycemia can occur. After the baby is delivered and the days following, there are no more hormones from the placenta which demanded more insulin, therefore insulin demand is decreased and gradually returns to normal requirements.

Diabetes mellitus may be effectively managed by appropriate meal planning, increased physical activity and properly-instituted insulin treatment. Some tips for controlling diabetes in pregnancy include:

Breast feeding is good for the child even with a mother with diabetes mellitus. Some women wonder whether breast feeding is recommended after they have been diagnosed with diabetes mellitus. Breast feeding is recommended for most babies, including when mothers may be diabetic. In fact, the child's risk for developing type 2 diabetes mellitus later in life may be lower if the baby was breast-fed. It also helps the child to maintain a healthy body weight during infancy. However, the breastmilk of mothers with diabetes has been demonstrated to have a different composition than that of non-diabetic mothers, containing elevated levels of glucose and insulin and decreased polyunsaturated fatty acids. Although benefits of breast-feeding for the children of diabetic mothers have been documented, ingestion of diabetic breast milk has also been linked to delayed language development on a dose-dependent basis.

The White classification, named after Priscilla White who pioneered research on the effect of diabetes types on perinatal outcome, is widely used to assess maternal and fetal risk. It distinguishes between gestational diabetes (type A) and diabetes that existed before pregnancy (pregestational diabetes). These two groups are further subdivided according to their associated risks and management.

There are 2 classes of gestational diabetes (diabetes which began during pregnancy):

The second group of diabetes which existed before pregnancy can be split up into these classes:

Contributions to Research and Treatment

Dr. Lois Jovanovic played an instrumental role in designing and reshaping treatment methods for pregnant women with diabetes. Her career began in the 1980s and led her to a position as CEO and Chief Science Officer at the Sansum Diabetes Research Institute (SDRI) from 1986 until her retirement in 2013. Herself a third generation type one diabetic, Jovanovic leaves behind a legacy of countless healthy deliveries in the face of dangerous health complications. Dr. Jovanovic was born on May 2, 1947, in Minneapolis. She died on September 18, 2018. Her death is said to be unconnected to her diabetes. In response to her passing, SDRI described her as the "Godmother of Modern-Day Diabetes."

Dr. Jovanovic's research was based on the idea that the key to successful pregnancy is close blood glucose management. She helped to set a new standard for what close glucose management should look like during pregnancy, believing and proving that diabetics are capable of delivering babies just as healthy as women without diabetes. She also worked to establish a partnership between engineers and doctors, making it possible to utilize an early Glucose-Controlled Insulin Infusion System. Furthermore, Dr. Jovanovic was intent on sharing her discoveries and treatment protocols. Through extensive travel and teaching, she established global guidelines of pregnancy care adopted by the International Diabetes Federation (IDF).

Retrieved from "https://en.wikipedia.org/w/index.php?title=Diabetes_and_pregnancy&oldid=1000316389"
Uses material from the Wikipedia article Diabetes and pregnancy, released under the CC BY-SA 3.0 license.