For other uses, see Dock (disambiguation).
Human-made structure involved in the handling of boats or ships 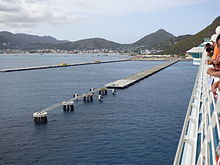 Dock for cruise ships in St Maarten in the Caribbean. 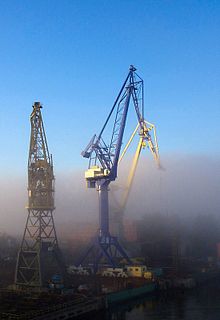 A dock (from Dutch dok) is the area of water between or next to one or a group of human-made structures that are involved in the handling of boats or ships (usually on or near a shore) or such structures themselves. The exact meaning varies among different variants of the English language.

"Dock" may also refer to a dockyard (also known as a shipyard) where the loading, unloading, building, or repairing of ships occurs.

The earliest known docks were those discovered in Wadi al-Jarf, an ancient Egyptian harbor, of Pharaoh Khufu, dating from c.2500 BC located on the Red Sea coast. Archaeologists also discovered anchors and storage jars near the site.

A dock from Lothal in India dates from 2400 BC and was located away from the main current to avoid deposition of silt. Modern oceanographers have observed that the ancient Harappans must have possessed great knowledge relating to tides in order to build such a dock on the ever-shifting course of the Sabarmati, as well as exemplary hydrography and maritime engineering. This is the earliest known dock found in the world equipped to berth and service ships.

It is speculated that Lothal engineers studied tidal movements and their effects on brick-built structures, since the walls are of kiln-burnt bricks. This knowledge also enabled them to select Lothal's location in the first place, as the Gulf of Khambhat has the highest tidal amplitude and ships can be sluiced through flow tides in the river estuary. The engineers built a trapezoidal structure, with north–south arms of average 21.8 metres (71.5 ft), and east–west arms of 37 metres (121 ft). 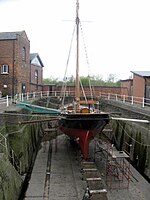 In British English, a dock is an enclosed area of water used for loading, unloading, building or repairing ships. Such a dock may be created by building enclosing harbour walls into an existing natural water space, or by excavation within what would otherwise be dry land.

There are specific types of dock structures where the water level is controlled:

Where the water level is not controlled berths may be:

A dockyard (or shipyard) consists of one or more docks, usually with other structures.

In American English, a dock is technically synonymous with pier or wharf—any human-made structure in the water intended for people to be on. However, in modern use, pier is generally used to refer to structures originally intended for industrial use, such as seafood processing or shipping, and more recently for cruise ships, and dock is used for almost everything else, often with a qualifier, such as ferry dock, swimming dock, ore dock and others. However, pier is also commonly used to refer to wooden or metal structures that extend into the ocean from beaches and are used, for the most part, to accommodate fishing in the ocean without using a boat.

In American English, the term for the water area between piers is "slip".

In parts of both the US and Canada

In the cottage country of Canada and the United States, a dock is a wooden platform built over water, with one end secured to the shore. The platform is used for the boarding and offloading of small boats.