The Dräxlmaier Group is a globally operating automotive supplier with its headquarters in the Lower Bavarian city of Vilsbiburg, Germany. Founded in 1958, the family-owned company specializes in the production of electrical systems, electrical and electronic components, interiors as well as battery systems for premium vehicles.

Today, the Dräxlmaier Group is one of the 100 largest automotive suppliers and market leader for vehicle electronics and interior systems in the premium segment. Its customer base includes Audi, BMW, Bugatti, Cadillac, Jaguar, Land Rover, Lamborghini, Maserati, Mercedes-Benz, MINI, Porsche, Tesla and Volkswagen.

With a revenue of 4.9 billion euro (2019) and over 70,000 employees (2019), Dräxlmaier Group is one of the most successful automotive suppliers worldwide.

The company is managed by CEOs Dr. Martin Gall and Franz Haslinger. The former CEO Fritz Dräxlmaier now acts as chairman of the executive board.

In May 1958, Lisa and Fritz Dräxlmaier Sr. entered the growing automotive market. The first order placed with the Lower Bavarian company was the production of 50,000 wiring harnesses for the Goggomobil by Hans Glas GmbH in Dingolfing, Germany. Soon after, a second product division was established. Dräxlmaier now supplied the entire vehicle equipment (including instrument panels, door panels, seat coverings and rear shelves) for the compact car, which was built until 1969.

As a result of continuously increasing orders, Dräxlmaier installed its first systems for welding door panels and forming thermoplastic sheets for the production of instrument panels in 1960. To accommodate the new equipment, the company’s first own factory building was built in 1964. 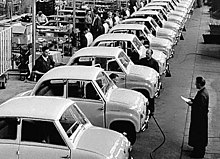 Production of the Goggomobil with wiring harnesses made by Dräxlmaier Group

In 1968, the growing number of orders prompted Dräxlmaier to expand its Vilsbiburg site. As part of the expansion and renovation, the company set up its own mold and tool production, and installed its first computer system. In the same year, construction began on a new production and administration building. Audi and Volkswagen were supplied with products made by the Dräxlmaier Group starting in 1969 and 1971, respectively.

With a production site in Tunisia, international expansion began in 1974. In the following years, numerous other locations abroad were opened, including a production plant for wiring harnesses and interior components in Niagara Falls, Canada (1976).

Within 20 years, the business premises of the family-owned company kept expanding. The number of employees also increased continuously during this time. Ten became 1,300 employees.

In 1987, an automated high-bay and small-parts warehouse is built at the Vilsbiburg site.

With the construction of the automated high-bay warehouse and the small-parts picking warehouse in 1987, the foundation for supply chain management was created. Since then, the material flow and all essential JIT/JIS processes have been controlled from here.

In 1997, Dräxlmaier developed a functionally integrated door module for the BMW 7 Series.

The expansion into Eastern Europe started in 1993 with sites in the Czech Republic and Romania. In the same year, another plant was opened in Tunisia.

With the order to develop, manufacture and supply the complete cockpit for the Mercedes-Benz CLK, the company became a system supplier for interiors in 1994. Two years later, in 1996, the production network was expanded through the setup of new plants in America and Mexico.

In 1997, the Dräxlmaier Group adopted its new, international name.

In the same year, the company was nominated for the first "Functionally Integrated System" (FIS) installed in the BMW 7 Series. This resulted in the development of the first interior module to integrate all electrical and electronic functions included in a car door into one comprehensive system.

In 1998, the company moved into the new Dräxlmaier Technology Center in Vilsbiburg. The next year, the Dräxlmaier Group produced a full-leather interior as the first system supplier for the Mercedes-Benz CL Coupe. This was followed by the production of the complete interior of the BMW Z8. For both models, Dräxlmaier developed and supplied the supply system.

In 2002, Dräxlmaier developed, produced and delivered the complete wiring system and interior for the Maybach luxury sedan. In addition to a second location in Landau an der Isar, Germany, a Dräxlmaier plant was built in Shenyang, China, in 2003. Since then, Porsche, Jaguar and Cadillac have become part of the company's customer base.

Another Eastern European location followed with the opening of a production plant in Serbia in 2008.

In 2011, the first-ever door panel with visible natural fibre was developed

In 2011, Dräxlmaier developed the world's first door panel with visible natural fiber. This was first installed in the all-electric BMW i3 in 2013.

The company expanded its existing production facilities in Shenyang, China, in 2012 and built a fully integrated production plant in Kavadarci, Macedonia. Another Dräxlmaier Group site opened in Leipzig, Germany, in 2013.

Another customer was acquired in 2014: Tesla.In the same year, the company's logistics network was expanded with the facilities in Zwickau, Germany.

In Langfang, China, the supplier opened a new production site for interior components in 2016.

In cooperation with the Technical University of Munich (Germany), a research and development location was established on the Garching campus in 2017. A new production site for interior components was opened in Livermore, USA. The automotive supplier set up the first highly automated battery production facility in Sachsenheim near Stuttgart, Germany.

DRÄXLMAIER is considered the inventor of customer-specific wiring harnesses.

In 2018, the Dräxlmaier Campus was built on the grounds of the GALILEO centre of the Technical University of Munich in Garching. There, Dräxlmaier developers and researching professors of the TUM work on future topics of the automotive industry.

On April 1, 2020, Franz Haslinger and Dr. Martin Gall took on the function of CEOs of the Dräxlmaier Group.

Fritz Dräxlmaier remains associated with the company as a representative of the shareholders and continues to exercise his function as chairman of the board.

The Dräxlmaier Group's range of services includes the development and production of vehicle wiring systems, cockpit modules and interiors (such as instrument panels, center consoles and door panels). Electrical, electronic and high-voltage components, and battery systems are also part of the automotive supplier's product portfolio.

The products were introduced as part of the complete interior for the Mercedes-Benz CLK, the FIS door module for the BMW 7 Series, the interiors of the Maybach luxury sedan and the Porsche Panamera, as well as the first door panel with visible natural fiber in the BMW i3.

The Dräxlmaier Group's portfolio includes all aspects of automotive electrics and electronics. Among other things, the company manufactures sensors and switches as well as high-voltage power distributors and fuse boxes.

The automotive supplier also produces complete door and cockpit modules that are adapted to the special equipment of the respective vehicle through system integration.

The company also creates RGB ambient lighting. The use of this LED technology ensures uniform and precise lighting throughout the entire vehicle interior.

Qestronic is a subsidiary enterprise of Dräxlmaier Group. It was founded on July 2009 and is located in Geisenhausen, Lower Bavaria, Germany. The company produces components and total systems, digital electronics, high-voltage energy storage and complete E-mobility solutions.

In 2017, the company received the award as Top Automotive Employer.

Fiat Chrysler Automobiles presented the Dräxlmaier Group with the Qualitas Award in the categories of Quality, Technology and Partnership in the EMEA region (Europe, Middle East and Africa) in 2016.

In 2016 the Dräxlmaier Group received an elogistics award in the category of Network Control for the TISS (Transport Information and Control System) solution, which the company developed together with the service provider Leogistics.

The automobile supplier's plant in Braunau, Austria was nominated "Factory of 2016".

The Dräxlmaier Group won the Red Dot Award in the category Product Design for the composite material DecoSOUL (Structure Organic Unlimited Layering) in 2015.

In September 2015, the Dräxlmaier Group was presented the "JLRQ Award" by Jaguar Land Rover.

In 2015, the world group Dräxlmaier came third in the presentation of the Top 500 Award for sustainable growth.