Driver's licenses in the United States

In the United States, driver's licenses are issued by each individual state, territory, and the District of Columbia rather than by the federal government due to federalism. Drivers are normally required to obtain a license from their state of residence and all states recognize each other's licenses for non-resident age requirements. A state may also suspend an individual's driving privilege within its borders for traffic violations. Many states share a common system of license classes, with some exceptions, e.g. commercial license classes are standardized by federal regulation at 49 CFR 383. Many driving permits and ID cards display small digits next to each data field. This is required by the American Association of Motor Vehicle Administrators’ design standard and has been adopted by many US states. According to the United States Department of Transportation, as of 2018, there are approximately 227 million licensed drivers in the United States.

A Maryland driver's license from the mid-1950s

A Maryland driver's license from the mid-1980s

As the number of motor vehicles in the US reached tens of thousands, state and local governments assumed a new power: authorizing vehicles and drivers. In 1901, New York became the first state to register automobiles. By 1918 all US states required license plates; states were slower to require licenses for drivers. Only 39 states issued them by 1935 and few required a test, despite widespread concern about incompetent drivers. Early motorists were taught to drive by automobile salesmen, family and friends, or organizations like the YMCA. By the 1930s, many high schools offered driver education.

Massachusetts and Missouri were the first states to require a driver license in 1903, but there was no test associated with the license. In 1908, Henry Ford launched the Model T, the first affordable automobile for many middle-class Americans (in 1919, when Michigan started issuing driver licenses, Ford got his first one at age 56). The same year the Model T debuted, Rhode Island became the first state to require both a license and a driver's exam (Massachusetts instituted a chauffeur exam in 1907 and started requiring tests for all other drivers in 1920).

Some states also have additional classifications. Nevada, for example, has a separate license category for drivers who only operate mopeds, while some more northerly states have separate categories for snowmobiles and ATVs. South Carolina and Georgia have non-commercial versions of every commercial class license for agricultural purposes.

Professional drivers are usually required to add endorsements to their CDL to drive certain types of vehicles that require additional training. CDL endorsements requirements are mostly similar, but some vary between states. The training and testing requirements are regulated by the US Department of Transportation. Endorsements are as follows:

There are two endorsements that do not come with a code:

Licenses can be restricted through any of the following ways:

The minimum age to obtain a restricted driver license in the US varies from 14 years, three months in South Dakota to as high as 17 in New Jersey. In most states, a graduated licensing law applies to newly-licensed teenage drivers, going by names such as Provisional Driver, Junior Operator, Probationary Driver, or Intermediate License. These licenses restrict certain driving privileges, such as whether the new driver may carry passengers and if so how many, as well as setting a curfew for young drivers. For example, Utah drivers who are under 18 may not drive other people outside the family in their first six months with a license. Unlike in some states of Australia and some provinces of Canada, graduated licensing laws do not require lowered speed limits, displaying of L and P plates, restrictions on towing a trailer or boat, or prohibitions on highway driving or operating high performance cars.

Drivers under 18 are usually required to attend a comprehensive driver's education program either at their high school or a professional driving school and take a certain number of behind-the-wheel lessons with a certified driving instructor before applying for a license. Some states like New York also require new adult drivers to attend some form of driver education before applying for a license.

In some states all newly licensed adult drivers may be on probation for a set amount of time (usually between six months and two years), during which traffic violations carry harsher penalties or mandatory suspensions that would not apply to experienced drivers.

Driving a school bus requires a CDL. The minimum age to drive a school bus is typically higher, usually 25. Some states issue restricted intrastate commercial driver's licenses, valid for operating commercial vehicles in that state only, to drivers aged 18 and older. Professional drivers who are aged 18–20 typically cannot be licensed to drive tractor trailers, hazardous materials or school buses.

Below is a list of Graduated Driver's Licenses (GDL) and hardship licenses for minors laws for each of the 50 states and the District of Columbia. The list includes the state agency responsible for issuing driver licenses and the length of time that a full (unrestricted) driver license is valid for.

Decline in licensing among juveniles

Use as identification and proof of age

Driver's licenses issued in the United States have a number or alphanumeric code issued by the issuing state's department of motor vehicles (or equivalent), usually show a photograph of the bearer, as well as a copy of the bearer's signature, the address of the bearer's primary residence, the type or class of license, restrictions, endorsements (if any), the physical characteristics of the bearer (such as height, weight, hair color and eye color) and birth date. Driver's license numbers issued by a state are unique. Social Security numbers are now prohibited by federal law from appearing on new driver's licenses due to identity theft concerns. In most states, to be compliant with AAMVA standards, the orientation of a driver's license for persons under the age of 21 is vertical while a driver's license for those over the age of 21 is horizontal. Since the driver's license is often used as proof of a person's age, the difference in orientation makes it easy to determine that a person is legally allowed to purchase or consume alcohol and purchase tobacco (the drinking and tobacco age in all U.S. states is 21). Some states, such as Arizona, do not require that a driver's license be changed to horizontal at age 21. The vertical license does not expire until age 65 in the state of Arizona. Most states require that when a driver establishes residence in a state, he or she must obtain a license issued by that state within a limited time. 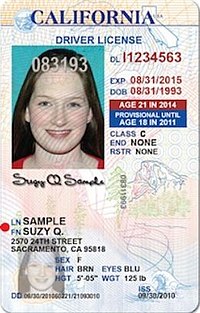 Because there is no national identity card in the United States, the driver's license is often used as the de facto equivalent for completion of many common business and governmental transactions. As a result, driver's licenses are stolen and used for identity theft. Driver's licenses were not always identification cards. In many states, driver's licenses did not even have a photograph until the 1980s. Advocacy by Mothers Against Drunk Driving for photo ID age verification in conjunction with increasing the drinking age to 21 to reduce underage drinking led to photographs being added to all state licenses. New York and Tennessee were the last states to add photos in 1986. New Jersey later allowed drivers to get non-photo licenses, but that option was subsequently revoked. Vermont license holders have the option of receiving a non-photo license. Tennessee drivers 60 years of age or older had the option of a non-photo driver's license prior to January 2013, when photo licenses were required for voting identification. Those with valid non-photo licenses were allowed to get a photo license when their current license expired. Thirteen states allow a non-photo driver's license for reasons of religious belief: Arkansas, Indiana, Kansas, Minnesota, Missouri, Nebraska, New Jersey, North Dakota, Oregon, Pennsylvania, Tennessee, Washington, and Wisconsin.

Later additions to licenses have included fingerprints, bar codes, magnetic strips, social security numbers, and tamper-proof features, most of which were added to prevent identity theft and to curb the use of fake IDs. States have slowly added digitized features to driver's licenses, which incorporate holograms and bar codes to reduce forgery.

Many states provide identification cards for people who do not drive, usually through the same agency that issues driver's licenses.

The Department of Homeland Security enforces standards of the Real ID Act of 2005 for identification of applicants and license design for state-issued driver licenses and identification cards. States are not required to comply with Real ID, but any driver licenses or ID cards issued by that state will not be valid for any official purpose with the federal government, including entering federal buildings or boarding airplanes.

For a state to comply with Real ID, licenses and ID cards issued from that state must be approved by DHS to meet Real ID requirements.

States can choose to issue both regular licenses and ID cards as well as Real IDs, but any non-Real ID must be marked "Not for Federal Identification". Real IDs are normally valid for eight years.

Real IDs are allowed to be issued only to legal immigrants and citizens of the United States.

An applicant for a Real ID, either as a new driver license or ID card applicant, or renewing a current license or ID card, must present a citizenship document (US passport, certified birth certificate or citizenship certificate) or proof of legal immigrant status, proof of a Social Security number if they have been issued one, proof of any name changes if using birth certificate, and two proofs of residency in the state. The state then must verify the documents and store them either electronically or on paper. No one may have more than one Real ID at one time.

A Real ID can be identified with a gold or black star located on the top right third of the ID, depending on the state. As of October 2011, Connecticut issues them. Starting in January 2013, Ohio is issuing Real IDs under the name "Safe ID". California started issuing Real IDs on January 22, 2018.

California, Iowa, and Delaware have proposed digital drivers licenses as a means of identification. The license would be available as an app by MorphoTrust USA and installed on a user's personal cellphone. Questions have been raised about user privacy, since a police officer may ask for one's license and gain access to one's cellphone.

Louisiana passed House Bill 481 in 2014 which became Act 625, making Louisiana the first state with a legally accepted digital driver's license via LA Wallet, an app created by Envoc that launched in July 2018. The law allows Louisiana residents to present driver identification using LA Wallet "...upon demand of any officer or agent of the department or any police officer of the state, parish, or municipality...". The Louisiana digital driver's license requires no additional hardware to accept and includes a “no-touch” policy whereby the citizen remains in possession of the mobile device at all times. In October 2018, the Louisiana Secretary of State Kyle Ardoin approved usage of LA Wallet for voter identification at the polling stations. In January 2019, the Louisiana Office of Alcohol and Tobacco Control issued a notice legally approving LA Wallet, Louisiana's Digital Driver's License app for purchase age verification for tobacco and alcohol sales.

Retrieved from "https://en.wikipedia.org/w/index.php?title=Driver%27s_licenses_in_the_United_States&oldid=1009509399"
Uses material from the Wikipedia article Driver's licenses in the United States, released under the CC BY-SA 3.0 license.