The Duke Blue Devils men's basketball team represents Duke University in NCAA Division I college basketball and competes in the Atlantic Coast Conference (ACC). The team is fourth all-time in wins of any NCAA men's basketball program, and is coached by Mike Krzyzewski.

Duke has won 5 NCAA Championships (tied with Indiana for fourth all-time behind UCLA, Kentucky and North Carolina) and appeared in 11 Championship Games (third all-time) and 16 Final Fours (fourth all-time behind North Carolina, UCLA, and Kentucky), and has an NCAA-best .755 NCAA tournament winning percentage. Eleven Duke players have been named the National Player of the Year, and 71 players have been selected in the NBA Draft. Additionally, Duke has 36 players named All-Americans (chosen 60 times) and 14 Academic All-Americans. Duke has been the Atlantic Coast Conference Champions a record 21 times, and also lays claim to 19 ACC regular season titles. Prior to joining the ACC, Duke won the Southern Conference championships five times. Duke has also finished the season ranked No. 1 in the AP poll seven times and is the all-time leader in total weeks ranked as the number one team in the nation by the AP with 135 weeks. Additionally, the Blue Devils have the third longest streak in the AP Top 25 in history with 200 consecutive appearances from 1996 to 2007, trailing only UCLA's 221 consecutive polls from 1966 to 1980, and Kansas’ 212 consecutive polls from 2009 to 2020.

In 1906, Wilbur Wade Card, Trinity College's Athletic Director and a member of the Class of 1900, introduced the game of basketball to Trinity. The January 30 issue of The Trinity Chronicle headlined the new sport on its front page. Trinity's first game ended in a loss to Wake Forest, 24–10. The game was played in the Angier B. Duke Gymnasium, later known as The Ark. The Trinity team won its first title in 1920, the state championship, by beating the North Carolina State College of Agriculture and Engineering (now NC State) 25 to 24. Earlier in the season they had beaten the University of North Carolina 19–18 in the first match-up between the two schools. Trinity college then became Duke University.

Billy Werber, Class of 1930, became Duke's first All-American in basketball. The Gothic-style West Campus opened that year, with a new gym, later to be named for Coach Card. The Indoor Stadium opened in 1940. Initially it was referred to as an "Addition" to the gymnasium. Part of its cost was paid for with the proceeds from the Duke football team's appearance in the 1938 Rose Bowl. In 1972 it would be named for Eddie Cameron, head coach from 1929 to 1942.

In 1952, Dick Groat became the first Duke player to be named National Player of the Year. Duke left the Southern Conference to become a charter member of the Atlantic Coast Conference in 1953. The Duke team under Vic Bubas made its first appearance in the Final Four in 1963, losing 94–75 to Loyola in the semifinal. The next year, Bubas' team reached the national title game, losing to the Bruins of UCLA, who claimed 10 titles in the next 12 years. Bob Verga was Duke's star player in 1967.

The basketball program won its 1000th game in 1974, making Duke only the eighth school in NCAA history to reach that figure. In a turnaround, Coach Bill Foster's 1978 Blue Devils, who had gone 2–10 in the ACC the previous year, won the conference tournament and went on to the NCAA championship game, where they fell to Kentucky. Gene Banks, Mike Gminski ('80) and Jim Spanarkel ('79) ran the floor.

Mike Krzyzewski has been at Duke since 1980. His many accomplishments include:

In Krzyzewski's first season, the Blue Devils would finish the season with a 17–13 overall record and 6–8 record in ACC play. The team would later play in the NIT Tournament advancing to the quarterfinals. Despite having a good record the previous season, the Blue Devils would struggle during the next two seasons finishing with 10 wins in 1982 and 11 wins in 1983. The 1984 team, led by Tommy Amaker & Johnny Dawkins, would bounce back in strong fashion finishing 24–10 and was ranked the No.14 in the AP and Coaches poll and advanced to the second round of the NCAA tournament.

Duke upset the heavily favored UNLV Runnin' Rebels 79–77 in the Final Four in 1991, a rematch of the 1990 final in which Duke lost by 30 points. The team, led by Christian Laettner, Bobby Hurley, Grant Hill, and Thomas Hill, went on to defeat Kansas 72–65 to win the university's first NCAA Championship. Ranked #1 all season and favored to repeat as national champions in 1992, Duke took part in a game "acclaimed by many [as] the greatest college basketball game ever played," according to ESPN. In the Elite Eight, Duke met the Rick Pitino-led Kentucky Wildcats. It appeared Kentucky had sealed the win in overtime when guard Sean Woods hit a running shot off the glass in the lane to put Kentucky up by one with 2.1 seconds left on the clock. After a timeout, Duke's Grant Hill threw a full-court pass to Christian Laettner. Laettner took one dribble and nailed a turn-around jumper at the buzzer to send Duke into the Final Four with a 104–103 victory. Duke went on to defeat sixth-seeded Michigan, led by the Fab Five as freshmen starters including Chris Webber, Jalen Rose and Juwan Howard, 71–51 to repeat as national champions. Following the successful repeat, Laettner was the only collegiate player to be chosen for the Dream Team that won Olympic gold in Barcelona, while Krzyzewski was an assistant coach under Chuck Daly of the Detroit Pistons in a precursor to his becoming Team USA coach in 2006 and coaching them to two gold medals.

They would later meet Kentucky for another classic regional final game, but blow a 17-point second half lead in losing to the Wildcats. The Blue Devils would lose the 1994 title game to Arkansas and their "Forty Minutes of Hell" defense. The next two seasons would see them fall to just 31–31, though they made the 1996 tournament with an 18–12 record, 8–8 in conference play. They would also fall in the 1999 title game, this time to Jim Calhoun and the UCONN Huskies. Duke defeated Arizona 82–72 to win its third NCAA Championship in 2001, becoming one of a handful of teams in NCAA Tournament history to defeat all of their tournament opponents by double digits. Krzyzewski was inducted into the Basketball Hall of Fame later that year. On April 5, 2010 Duke Men's Basketball won their fourth NCAA Championship by defeating Butler 61–59. On April 6, 2015 Duke's Men's Basketball won their fifth NCAA Championship by defeating Wisconsin 68–63.

Duke has been ranked as the #1 team in the nation 235 weeks in their history. 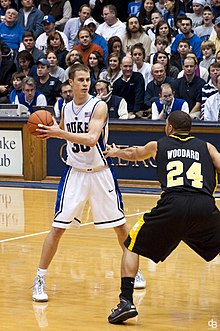 The NCAA began seeding the tournament with the 1978 edition.

The Blue Devils have appeared in the NCAA Tournament 43 times. Their combined record is 114–38.

The Blue Devils have appeared in the National Invitation Tournament (NIT) five times. Their combined record is 5–6. 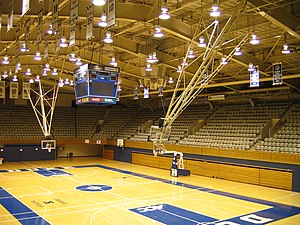 Cameron Indoor Stadium was completed on January 6, 1940, having cost $400,000. At the time, it was the largest gymnasium in the country south of the Palestra at the University of Pennsylvania. Originally called Duke Indoor Stadium, it was renamed for Coach Cameron on January 22, 1972. The building originally included seating for 8,800, though standing room was sufficient to ensure that 12,000 could fit in on a particularly busy day. Then, as now, Duke students were allowed a large chunk of the seats, including those directly alongside the court. Renovations in 1987–1988 removed the standing room areas and added seats, bringing capacity to 9,314...

Duke's men's basketball teams have had a decided home-court advantage for many years, thanks to the diehard students known as the Cameron Crazies. The hardwood floor has been dedicated and renamed Coach K Court in honor of head coach Mike Krzyzewski, and the tent city outside Cameron where students camp out before big games is known as Krzyzewskiville. In 1999, Sports Illustrated ranked Cameron the fourth best venue in all of professional and college sports, and USA Today referred to it as "the toughest road game in the nation".

Duke had not lost a non-conference game at Cameron from 2000 until 2019, when SFASU beat Duke in overtime (85–83). Duke maintains a tradition of hosting the previous season's Division II national champion in an exhibition game each November.

National Players of the Year 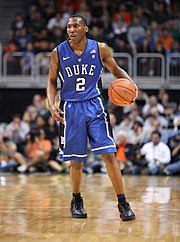 Nolan Smith was the ACC Player of the Year in 2011. 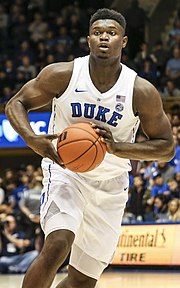 Zion Williamson was named ACC Player of the Year in 2019.

ACC Rookies of the Year 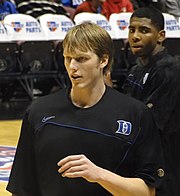 Kyle Singler was the ACC Rookie of the Year in 2008.

National Defensive Player of the Year

ACC Defensive Player of the Year (since 2005)

The following 78 McDonald's All-Americans have signed and played for Duke. 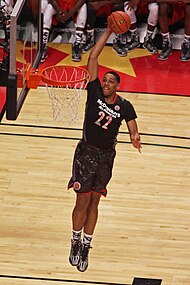 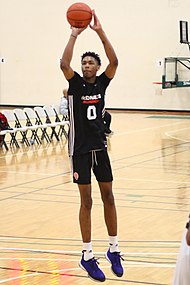 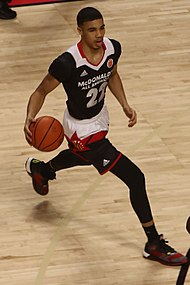 Blue Devils in the NBA

As of December 2020, these former Blue Devils players were in the NBA:

The Duke–North Carolina rivalry is often ranked among the top rivalries in both college basketball and all North American sports. The Duke Blue Devils face the North Carolina Tar Heels twice each year during ACC play, with thousands of Duke undergraduate students participating in an annual tradition of camping out in Krzyzewskiville, a lawn in front of Cameron Indoor Stadium, for months to line up for admission into the rivalry game. The two teams always face each other for their last game of the regular season, with the home team hosting their Senior Night. Some years, the two teams meet for a third game in the ACC Tournament.

The two programs have combined for 11 national championships, with North Carolina leading Duke 6–5. The intensity of the rivalry is augmented by the proximity of the two universities, located only ten miles apart along U.S. Highway 15–501 (also known as Tobacco Road) or eight miles apart in straight-line distance in the cities of Durham and Chapel Hill. In addition, Duke is a private university whereas North Carolina is a public school; the vastly different funding structures and cultures between the two further contribute to the intensity of the rivalry.

Former Esquire editor and author (and North Carolina graduate) Will Blythe argues that the rivalry's passion can be attributed greatly to class and culture in the South. 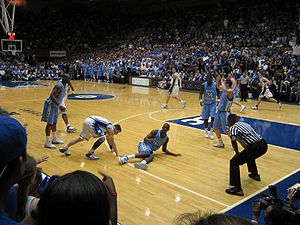 The March 4, 2006 game was the most watched college basketball game in ESPN history.

The rivalry has been the subject of various books and articles, including To Hate Like This Is to Be Happy Forever by Blythe and Blue Blood by Art Chansky.

Further illustrating the intensity of the rivalry, U.S. Representative Brad Miller, a die-hard Carolina fan, told an Associated Press writer in 2012, "I have said very publicly that if Duke was playing against the Taliban, then I'd have to pull for the Taliban."

However, also due to the close proximity of the two schools, there is respect and collaboration within the rivalry. Inspired by the men's basketball teams, twenty-four students from the two schools got together from January 14–16, 2006 in order to attempt to break the world record for the longest continuous game of basketball ever recorded. The game set a new world record at 57 hours, 17 minutes and 41 seconds with Duke winning the game 3699–3444. All $60,000 raised from the marathon benefited the Hoop Dreams Basketball Academy, an organization which helps children with life-threatening illnesses develop successful life skills through basketball.

Beyond athletics, the school papers have also engaged in the rivalry. As a tradition, one day prior to a Duke-Carolina basketball game, The Chronicle, Duke's student newspaper, publishes a spoof cover page for the day's edition with the title The Daily Tar Hole. Contained within are fake news stories poking fun at The Daily Tar Heel and the North Carolina Tar Heels. The Daily Tar Heel typically publishes former columnist Ian Williams' "Insider's guide to hating Duke" for the two basketball match-ups each year. There is a longstanding agreement that if Duke wins the first matchup, The Daily Tar Heel's masthead is printed in Duke blue, and if Carolina wins the first matchup, The Chronicle's masthead is painted Carolina blue. The losing school's paper also has to put the other school's logo in a conspicuous location and claim that the winning school is "still the best."

The Michigan Wolverines and the Maryland Terrapins basketball teams have also claimed rivalries against the Blue Devils, but Duke has long rejected both claims and considers North Carolina to be its only rival.