This article is about the bodily process. It is not to be confused with Defecation (band), defector, or defalcation.
Expulsion of feces from the digestive tract via the anus

Anatomy of the anus and rectum

Defecation is the final act of digestion, by which organisms eliminate solid, semisolid, or liquid waste material from the digestive tract via the anus.

Humans expel feces with a frequency varying from a few times daily to a few times weekly. Waves of muscular contraction (known as peristalsis) in the walls of the colon move fecal matter through the digestive tract towards the rectum. Undigested food may also be expelled this way, in a process called egestion.

Open defecation, the practice of defecating outside without using a toilet of any kind, is still widespread in some developing countries.

Defecation may be involuntary or voluntary. Young children learn voluntary control through the process of toilet training. Once trained, loss of control, called fecal incontinence, may be caused by physical injury, nerve injury, prior surgeries (such as an episiotomy), constipation, diarrhea, loss of storage capacity in the rectum, intense fright, inflammatory bowel disease, psychological or neurological factors, childbirth, or death.

Sometimes, due to the inability to control one's bowel movement or due to excessive fear, defecation (usually accompanied by urination) occurs involuntarily, soiling a person's undergarments. This may cause significant embarrassment to the person if this occurs in the presence of other people or in a public place.

The positions and modalities of defecation are culture-dependent. Squat toilets are used by the vast majority of the world, including most of Africa, Asia, and the Middle East. The use of sit-down toilets in the Western world is a relatively recent development, beginning in the 19th century with the advent of indoor plumbing.

Regular bowel movements determine the functionality and the health of the alimentary tracts in human body. Defecation is the most common regular bowel movement which eliminates waste from the human body. The frequency of defecation is hard to identify, which can vary from daily to weekly depending on individual bowel habits, the impact from the environment and genetic. If defecation is delayed for a prolonged period the fecal matter may harden, resulting in constipation. If defecation occurs too fast, before excess liquid is absorbed, diarrhea may occur. Other associated symptoms can include abdominal bloating, abdominal pain, and abdominal distention. Disorders of the bowel can seriously impact quality of life and daily activities. The causes of functional bowel disorder are multifactorial, and dietary habits such as food intolerance and low fibre diet are considered to be the primary factors.

Constipation, also known as defecatory dysfunction, is the difficulty experienced when passing stools. It is one of the most notable alimentary disorders that affects different age groups in the population. The common constipation is associated with abdominal distention, pain or bloating. Researches revealed that the chronic constipation complied with higher risk of cardiovascular events such as 'coronary heart disease and ischemic stroke', while associating with an increasing risk of mortality. Besides the dietary factors, the psychological traumas and 'pelvic floor disorders' can also cause the chronic constipation and defecatory disorder respectively. Multiple interventions, including physical activities, 'high-fibre diet', probiotics and drug therapies can be widely and efficiently used to treat constipation and defecatory disorder.

Inflammatory disease is characterized as a long-lasting chronic inflammatory throughout the gastrointestinal tract. Crohn's disease (CD) and ulcerative colitis (UC) are the two universal type of inflammatory bowel diseases that have been studied over a century, and they are closely related to different environmental risk factors, family genetic and people's lifestyle such that smoking is considered highly associated with these diseases. Crohn's disease is discovered to be related to immune disorders particularly . Different level of cumulative intestinal injuries can cause different complications, such as 'fistulae, damage of bowel function and symptoms reoccur, disability' etc. The patient group can vary from children to adults. The newest research revealed that immunodeficiency and monogenic are the causes of young patients with inflammatory bowel diseases. The onset rate keeps updating each year with dramatically increased number and the pathogen of the bowel disease are also complicated due to the complexity of the bowel organs, bowel diseases are diverse in terms of the small and big bowel.

Common symptoms for inflammatory bowel diseases differ by the infection level, but may include severe abdominal pain, diarrhoea, fatigue and unexpected weight loss. Crohn's disease can lead to infection of any part of the digestive tract, including ileum to anus. Internal manifestations include diarrhoea, abdomen pain, fever, chronic anaemia etc. External manifestations include impact on skin, joints, eyes and liver. Significantly reduced 'microbat diversity' inside the gastrointestinal tract can also be observed. Ulcerative colitis mainly affects the function of the large bowel, and its incidence rate is three times larger than the Crohn's disease. In terms of clinical features, over 90% of patients exhibited constant diarrhoea, 'rectal bleeding, softer and mucus in the stool, tenesmus and abdomen pain'. At the same time, patient also reported to be having 'arthralgia, episcleritis and erythema nodosum'. The symptoms can continue for around 6 weeks or even more than that.

The inflammatory bowel diseases could be effectively treated by 'pharmacotherapies' to relieve and maintain the symptoms, which showed in 'mucosal healing' and symptoms elimination. However, an optimal therapy for curing both inflammatory diseases are still under research due to the heterogeneity in clinical feature. Although both UC and CD are sharing similar symptoms, the medical treatment of them are distinctively different. Dietary treatment can benefit for curing CD by increase the dietary zinc and fish intake, which is related to mucosal healing of the bowel. Treatments vary from drug treatment to surgery based on the active level of the CD. UC can also be relieved by using immunosuppressive therapy for mild to moderate disease level and application of biological agents for severe cases.

Irritable bowel syndrome is diagnosed as an intestinal disorder with chronic abdominal pain and inconsistency form of stool, and it is a common bowel disease that can be easily diagnosed in modern society. The variety of incident rate is acceptable due to the different diagnostic criteria in different countries, the 18–34 age group is recognized as the high frequency incident group. The definite cause of the irritable bowel syndrome is remaining a mystery, however, it has been founded relating to multifactor, such as 'alternation of mood and pressure, sleep disorders, food triggers, changing of dysbiosis and even sexual disfunction'. One third of irritable bowel syndrome patients has family history with the disease suggesting that genetic predisposition could be a significant cause for irritable bowel syndrome.

The treatment for irritable bowel diseases is multimodal. Dietary interference and pharmacotherapies both can relieve the symptoms to a certain degree. Avoiding trigger or allergy food group can be beneficial by reducing fermentation in the digestive tract and gas production, hence effectively alleviate abdominal pain and bloating. Drug interventions, such as laxatives, loperamide, and lubiprostone are applied to relieve intense symptoms including diarrhea, abdominal pain and constipation. Psychological treatment, dietary supplements and gut-focused hypnotherapy are recommended for targeting depression, mood disorders and sleep disturbance.

Bowel obstruction is a bowel condition which is a blockage that can be found in both the small intestines and large intestines. The increase of contractions can relief blockages, however, the continuous contraction with deceasing functionality may lead to terminated mobility of the small intestines, which then forms the obstruction. At the same time, the lack of the contractility encourages liquid and gas accumulation. and 'electrolyte disturbances'. The small bowel obstruction can result in severe renal damage and hypovolemia. while evolving into 'mucosal ischemia and perforation'. Patients with small bowel obstruction were found experiencing constipation, strangulation and abdominal pain and vomiting. Surgery intervention is primarily used to cure severe small bowel obstruction condition. Nonoperative therapy included ‘nasogastric tube decompression', 'water-soluble-contrast medium process' or symptomatic management can be applied to treat less severe symptoms

Attempting forced expiration of breath against a closed airway (the valsalva maneuver) is sometimes practiced to induce defecation while on a toilet. This contraction of expiratory chest muscles, diaphragm, abdominal wall muscles, and pelvic diaphragm exerts pressure on the digestive tract. Ventilation at this point temporarily ceases as the lungs push the chest diaphragm down to exert the pressure. Cardiac arrest and other cardiovascular complications can in rare cases occur due to attempting to defecate using the valsalva maneuver. Valsalva retinopathy is another pathological syndrome associated with the Valsalva maneuver. Thoracic blood pressure rises and as a reflex response the amount of blood pumped by the heart decreases. Death has been known to occur in cases where defecation causes the blood pressure to rise enough to cause the rupture of an aneurysm or to dislodge blood clots (see thrombosis). Also, in releasing the Valsalva maneuver blood pressure falls; this, coupled with standing up quickly to leave the toilet, can result in a blackout.

Open defecation is the human practice of defecating outside (in the open environment) rather than into a toilet. People may choose fields, bushes, forests, ditches, streets, canals or other open space for defecation. They do so because either they do not have a toilet readily accessible or due to traditional cultural practices. The practice is common where sanitation infrastructure and services are not available. Even if toilets are available, behavior change efforts may still be needed to promote the use of toilets.

Open defecation can pollute the environment and cause health problems. High levels of open defecation are linked to high child mortality, poor nutrition, poverty, and large disparities between rich and poor.

Ending open defecation is an indicator being used to measure progress towards the Sustainable Development Goal Number 6. Extreme poverty and lack of sanitation are statistically linked. Therefore, eliminating open defecation is thought to be an important part of the effort to eliminate poverty. 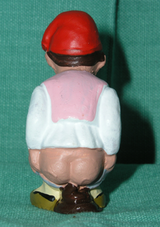 The caganer is a defecating figurine in Spanish nativity scenes

Some peoples have culturally significant stories in which defecation plays a role. For example:

Retrieved from "https://en.wikipedia.org/w/index.php?title=Defecation&oldid=1006727997"
Uses material from the Wikipedia article Defecation, released under the CC BY-SA 3.0 license.