This article is about the spring and nature reserve. For other uses, see Ein Gedi (disambiguation).

Ein Gedi (Hebrew: עֵין גֶּדִי‎), literally "spring of the kid (young goat)" is an oasis and a nature reserve in Israel, located west of the Dead Sea, near Masada and the Qumran Caves. Ein Gedi was listed in 2016 as one of the most popular nature sites in the country. The site attracts about one million visitors a year.

A Chalcolithic temple (ca. mid-fourth millennium BCE) belonging to the Ghassulian culture was excavated on the slope between two springs, Ein Shulamit and Ein Gedi. More Chalcolithic finds were made at the Moringa and Mikveh Caves.

No traces of Bronze Age settlement have been found at Ein Gedi.

The remains of the Iron Age settlement at Ein Gedi are located at a tell on the north bank of Wadi Arugot, known in Arabic as Tell el-Jurn and in Hebrew as Tel Goren. The first permanent Iron Age settlement was Judean and was established around 630 BCE. The site was destroyed or abandoned after the Babylonian destruction of Jerusalem in 587/86 BCE.

In Joshua 15:62, Ein Gedi is enumerated among the wilderness cities of the Tribe of Judah in the desert of Betharaba, and in Ezekiel 47:10, it is prophesied that one day, its coastal location will make it into a fishing village, after the water of the Dead Sea has been made sweet:

Fishing nets will be spread from En-gedi to En-eglaim.

Fleeing from King Saul, David hides in the strongholds at Ein Gedi (1 Samuel 23:29 and 24:1–2) and Saul seeks him "even upon the most craggy rocks, which are accessible only to wild goats" (1 Samuel 24:2). Psalm 63, subtitled a Psalm of David when he was in the wilderness of Judah, has been associated with David's sojourn in the desert of En-gedi.

In 2 Chronicles 20:2 Ein Gedi is identified with Hazazon-tamar, Hazezon Tamar, Hatzatzon-Tamar or Hazezontamar (חַצְצוֹן תָּמָר ḥaṣṣōn tāmār, "portion [of land] of date palms"), on account of the palm groves which surrounded it, where the Moabites and Ammonites gathered in order to fight Josaphat, king of Judah. In Genesis 14:7 Hazazon-tamar is mentioned as being an Amorite city, smitten by Chedorlaomer in his war against the cities of the plain.

The Song of Songs (Song of Solomon 1:14) speaks of the "vineyards of En Gedi". The words of Ecclesiasticus 24:18, "I was exalted like a palm tree in Cades" (’en aígialoîs), may perhaps be understood as the palm trees of Ein Gedi.

The settlement at Tel Goren is a rare example of a town which reached its zenith during the Persian period, probably during the late 5th century BCE.

According to the Jewish-Roman historian Josephus Flavius, the Sicarii, who fought the Romans until their defeat and mass suicide at Masada, plundered local villages including En Gedi. At En Gedi, they drove out the defenders, and killed over seven hundred women and children who could not run away. 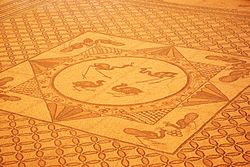 The indigenous Jewish town of Ein Gedi was an important source of balsam for the Greco-Roman world until its destruction by Byzantine emperor Justinian as part of his persecution of the Jews in his realm. A synagogue mosaic remains from Ein Gedi's heyday, including a Judeo-Aramaic inscription mosaic now on display at Jerusalem's Schottenstein campus museum warning inhabitants against "revealing the town's secret" – possibly the methods for extraction and preparation of the much-prized balsam resin, though not stated outright in the inscription – to the outside world.

In 1838, Edward Robinson reported that the whole area were covered with gardens, mainly cucumbers, all belonging to the Rashaideh tribe.

In April 1848, Lieutenant William Francis Lynch led an American expedition down the Jordan River into the Dead Sea, that stopped at En Gedi (Ain Jidy).

In 1998–99, the archaeological expedition of Yizhar Hirschfeld at Ein Gedi systematically excavated what has been called "the Essenes site", first discovered by Yohanan Aharoni in 1956.

Ein Gedi nature reserve was declared in 1971 and is one of the most important reserves in Israel. The park is situated on the eastern border of the Judean Desert, on the Dead Sea coast, and covers an area of 14000 dunams (3,500 acres or 14 km2).

The elevation of the land ranges from the level of the Dead Sea at 423 meters (1,388 ft) below sea level to the plateau of the Judean Desert at 200 meters above sea level. Ein Gedi nature reserve includes two spring-fed streams with flowing water year-round: Nahal David and Nahal Arugot (German article at: de:Nachal Arugot). Two other springs, the Shulamit and Ein Gedi springs, also flow in the reserve. Together, the springs generate approximately three million cubic meters of water per year. Much of the water is used for agriculture or is bottled for consumption.

The reserve is a sanctuary for many types of plant, bird and animal species. The vegetation includes plants and trees from the tropical, desert, Mediterranean, and steppian regions, such as Sodom apple, acacia, jujube, and poplar. The many species of resident birds are supplemented by over 200 additional species during the migration periods in the spring and fall. Mammal species include the Nubian ibex and the rock hyrax.

The Ein Gedi national park features several archaeological sites including the Chalcolithic Temple of Ein Gedi and a first-century CE village. The park was declared in 2002 and covers an area of 8 dunams (2.0 acres or 8,000 m2). 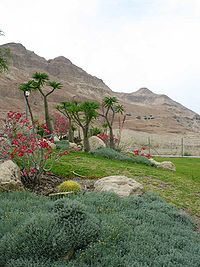 Kibbutz Ein Gedi, founded in 1956, is located about a kilometer from the oasis. It offers various tourist attractions and takes advantage of the local weather patterns and the abundance of natural water to cultivate out-of-season produce. The kibbutz area contains an internationally acclaimed botanical garden covering an area of 100 dunams (10 ha, 24.7 acres). There one can find more than 900 species of plants from all over the world. The kibbutz is also home to the Ein Gedi Eco Park, which functions as both a zoo and an environmental education center, demonstrating sustainable technologies such as solar cookers, greywater systems, mud buildings, and compost toilets.

The Ein Gedi race, also known as the Shalom Marathon – Dead Sea Half Marathon is a popular road running event over several distances that has been held by the Tamar Regional Council since 1983. The starting point for all races is the Ein Gedi Spa, 80 kilometers (50 mi) southeast of Jerusalem and 4 kilometers south of Kibbutz Ein Gedi.