This article is about the actress. For the journalist, see Elizabeth Banks (journalist). For the British cyclist, see Lizzy Banks.
American actress and filmmaker

Elizabeth Banks (born Elizabeth Irene Mitchell; February 10, 1974) is an American actress, director, writer, and producer. She is known for playing Effie Trinket in The Hunger Games film series (2012–2015) and Gail Abernathy-McKadden in the Pitch Perfect film series (2012–2017). Banks made her directorial film debut with Pitch Perfect 2 (2015), whose $69 million opening-weekend gross set a record for a first-time director. She also directed, wrote, produced, and starred in the action comedy film Charlie's Angels (2019).

On television, Banks had a recurring role as Avery Jessup on the NBC sitcom 30 Rock, which earned her two Primetime Emmy Award nominations. She had recurring roles on the comedy series Scrubs and Modern Family, the latter of which earned her a third Primetime Emmy Award nomination. Banks starred in the Netflix miniseries Wet Hot American Summer: First Day of Camp (2015) and Wet Hot American Summer: Ten Years Later (2017). As of 2019, she hosts a revival of the 1980s game show Press Your Luck on ABC.

Banks was born in Pittsfield, Massachusetts, and grew up on Brown Street, the eldest of four children of Ann (née Wallace) and Mark P. Mitchell. Her father, a Vietnam War veteran, was a factory worker for General Electric and her mother worked in a bank. She has said that she grew up "Irish + WASP + Catholic." Growing up, Banks played baseball and rode horses. She was in Little League when she broke her leg sliding into third base. She then tried out for the school play, which was her start in acting. 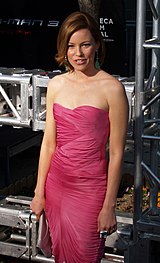 Banks changed her name upon joining the Screen Actors Guild, as actress Elizabeth Mitchell was already registered in the union under that name.

After auditioning in New York, she was offered a role on the soap opera Santa Barbara. Taking the role would have required her to quit her education at the American Conservatory Theatre, and Banks ultimately decided to forgo the offer due to having taken out student loans to complete her degree. She made her acting debut in the 1998 independent film Surrender Dorothy, as Elizabeth Casey, and appeared in various films over the next seven years including Wet Hot American Summer (2001), Swept Away (2002), and Seabiscuit (2003).

In 2002, Banks set up her own production company called Brownstone Productions with her future husband, Max Handelman.

Banks gained more prominent widespread exposure with her role in the 2005 comedy film The 40-Year-Old Virgin. In August 2005, at the Williamstown Theatre Festival, Banks starred in William Inge's Bus Stop as Cherie, the sexy blonde aspiring nightclub singer. Jeffrey Borak wrote that Banks' portrayal was acted "with poise, clarity and a shrewd feel for Cherie's complexities. Her performance is all of a piece and in harmony, stylistically, with the performances around her." In 2005, she appeared on the series Stella, and in May 2006, she had a role in the season five finale of the NBC sitcom Scrubs as Dr. Kim Briggs, the love interest of J.D. (Zach Braff). Banks appeared throughout seasons six, seven, and eight as a recurring guest star.

In 2006, Banks appeared in the American football drama film Invincible, in which she played Mark Wahlberg's love interest. Later, she and co-star Wahlberg were nominated for the "Best Kiss" award at the MTV Movie Awards. That same year, she landed the starring role in the comedy-horror film Slither.

In 2007, Banks played the female lead in the comedy film Meet Bill, alongside Aaron Eckhart and Jessica Alba. That same year, she had a small role as Santa's little helper, Charlyne, in the Christmas comedy film Fred Claus, co-starring Vince Vaughn and Paul Giamatti. In 2008, she played the ex-wife and mother of the daughter of Ryan Reynolds lead in the comedy film Definitely, Maybe, alongside Isla Fisher and Ryan Reynolds, starred with Seth Rogen as the eponymous female lead in the Kevin Smith comedy Zack and Miri Make a Porno, and played United States First Lady Laura Bush in W., Oliver Stone's biopic of George W. Bush. 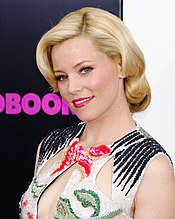 In 2009, Banks appeared in the horror film The Uninvited, a remake of the South Korean film A Tale of Two Sisters. The film was about an intrusive stepmother who makes life miserable for the teen daughters of her new husband. Banks based her character, Rachel, on Rebecca De Mornay's character in The Hand That Rocks the Cradle. "It was very important to me that every line reading I gave could be interpreted two ways," says Banks of her role, "So that when you go back through the movie you can see that".

Banks is a frequent co-star of actor Paul Rudd, the two having appeared in five films together to date (Wet Hot American Summer, The Baxter, The 40-Year-Old Virgin, Role Models, and Our Idiot Brother). She is also a frequent co-star of actor Tobey Maguire, the two having also appeared in five films together (Spider-Man, Seabiscuit, Spider-Man 2, Spider-Man 3, and The Details).

Banks was cast as a love interest for Jack Donaghy (Alec Baldwin) in the fourth season of the Emmy Award-winning sitcom 30 Rock. Intended to appear in four episodes in 2010, Banks went on to become a recurring character with 13 appearances by the end of the fifth season, including her marriage in the episode Mrs. Donaghy. Her performance in season five earned her a nomination for Primetime Emmy Award for Outstanding Guest Actress in a Comedy Series for the 63rd Primetime Emmy Awards.

In 2012, Banks starred in the romantic comedy film What to Expect When You're Expecting and the action film Man on a Ledge. She also starred as Gail Abernathy-McKadden in the musical comedy film Pitch Perfect, which became a critical and commercial success.

In 2014, Banks was recognized by Elle Magazine during The Women in Hollywood Awards, honoring women for their outstanding achievements in film, spanning all aspects of the motion picture industry, including acting, directing, and producing. 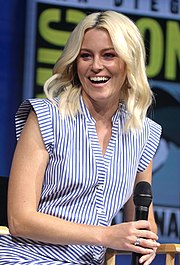 Banks at the 2018 San Diego Comic-Con

Banks portrayed Melinda Ledbetter Wilson, the wife of Brian Wilson, in the 2015 biopic Love & Mercy, which is based on the life of the musician and founding member of The Beach Boys, as portrayed by John Cusack.

In 2015, she was named as a member of the Jury for the Main Competition at the 2015 Venice Film Festival. The festival is chaired by Alfonso Cuarón. Also in 2015, Banks became a spokeswoman for Realtor.com in their series of television commercials. As of mid-February 2016, Banks became the commercial face of Old Navy. She also played space alien Rita Repulsa in the 2017 Power Rangers reboot film.

In 2018, Banks co-starred as Jenny in the comedy film The Happytime Murders, alongside Melissa McCarthy and Maya Rudolph. In 2019, she reprised her starring role as Lucy / Wyldstyle in the animated comedy film The Lego Movie 2: The Second Part. She then starred as Tori Breyer in the superhero horror film Brightburn.

On May 2, 2019, ABC announced Banks as the host of the summer 2019 revival of the game show Press Your Luck, which she also executive produces. Banks directed, produced, wrote, and starred as Bosley in the action comedy film Charlie's Angels, which was released in November 2019. In 2020, she starred as feminist Jill Ruckelshaus in the FX miniseries Mrs. America.

In November 2019, it was announced that Banks was set to star in, direct, and produce a new adaptation of The Invisible Woman (1940), based on her own original story pitch. Erin Cressida Wilson will write the script for the reboot of the female monster, while Max Handelman and Alison Small will serve as producer and executive producer, respectively. Banks was allowed to choose a project by Universal Pictures from the roster of Universal Monsters, ultimately choosing The Invisible Woman. In June 2020, it was announced Banks would star as Ms. Frizzle in a live-action/animated hybrid of The Magic School Bus, for which she will also produce through her company Brownstone Productions alongside directors and writers Tom McGrath and Eric Darnell.

Banks during a USO visit at Bagram Air Base, Afghanistan in 2015

Banks met her husband, Max Handelman, a sportswriter and producer from Portland, Oregon, on her first day of college on September 7, 1992. They were married in 2003. The couple have two sons, born via surrogate.

Banks went through parts of conversion to Judaism, her husband's faith, and studied with rabbis. In 2013, speaking of her religion, she stated that she practices Judaism, though "I did not have my mikveh, so technically I'm not converted," but that she has "been essentially a Jew for like 15 years," adding "Frankly, because I'm already doing everything [practicing religious rituals], I feel like I'm as Jewish as I'm ever going to be."

Banks was a vocal supporter of Hillary Clinton's 2016 presidential campaign and was involved in a rendition of Rachel Platten's single "Fight Song" with other celebrities at the 2016 Democratic National Convention. She also identifies as a feminist. In September 2020, Banks urged her Instagram followers to contact VoteRiders to get information and assistance with voter ID.

Banks has more than 250 credits to her name within film, television, and video games.