Elmo Russell "Bud" Zumwalt Jr. (November 29, 1920 – January 2, 2000) was a United States Navy officer and the youngest person to serve as Chief of Naval Operations. As an admiral and later the 19th Chief of Naval Operations, Zumwalt played a major role in United States military history, especially during the Vietnam War. A decorated war veteran, Zumwalt reformed United States Navy personnel policies in an effort to improve enlisted life and ease racial tensions. After he retired from a 32-year navy career, he launched an unsuccessful campaign for the United States Senate.

Zumwalt was born in San Francisco, California, the son of Elmo Russell Zumwalt, and his wife, Frances Pearl (Frank) Zumwalt, both country doctors. Frances was raised Jewish, the daughter of Julius and Sarah Frank of Burlington, Vermont. Her family moved to Los Angeles, California, where she grew up. She became estranged from her parents for marrying outside the faith, as the Zumwalts were Christians.

Zumwalt, an Eagle Scout and recipient of the Distinguished Eagle Scout Award from the Boy Scouts of America, attended Tulare Union High School in Tulare, California, where he became the valedictorian, and Rutherford Preparatory School in Long Beach, California.

Zumwalt had planned to become a doctor like his parents, but in 1939, he was accepted to the United States Naval Academy (USNA) at Annapolis, Maryland. As a midshipman at the USNA, he was president of the Trident Society, vice president of the Quarterdeck Society and the two-time winner of the June Week Public Speaking Contest (1940–41). Zumwalt also participated in intercollegiate debating and was a Company Commander (1941) and Regimental Three Striper (1942). He graduated with distinction and was commissioned as an ensign on June 19, 1942. He also received an honorary degree from Texas Tech University.

Zumwalt was assigned to USS Phelps, a destroyer. In August 1943, Phelps was detached for instruction in the Operational Training Command-Pacific in San Francisco. In January 1944, Zumwalt reported for duty on board USS Robinson. On this ship, he was awarded the Bronze Star Medal with Valor device for "heroic service as Evaluator in the Combat Information Center ... in action against enemy Japanese battleships during the Battle for Leyte Gulf, October 25, 1944".

After the end of World War II in August 1945, Zumwalt continued to serve until December 8, 1945, as the prize crew officer of the Ataka, a 1,200-ton Japanese river gunboat with a crew of 200. In this capacity, he took the first American-controlled ship since the outbreak of World War II up the Huangpu River to Shanghai, China. There, they helped to restore order and assisted in disarming the Japanese.

In January 1948, Zumwalt was assigned to the Naval Reserve Officers Training Corps unit of the University of North Carolina, where he remained until June 1950. That same month, he assumed command of USS Tills, a destroyer escort that was commissioned in a reserve status. The Tills was placed in full active commission at Charleston Naval Shipyard on November 21, 1950, and he continued to command her until March 1951, when he joined the battleship USS Wisconsin as navigator and served with the ship in operations in Korea.

Detached from USS Wisconsin in June 1952, he attended the Naval War College, Newport, Rhode Island, and in June 1953, he reported as head of the Shore and Overseas Bases Section, Bureau of Naval Personnel, Navy Department, Washington, DC. He also served as officer and enlisted requirements officer, and as action officer on Medicare legislation. Completing that tour of duty in July 1955, he assumed command of the destroyer USS Arnold J. Isbell, participating in two deployments with the United States Seventh Fleet. In this assignment, he was commended by the Commander, Cruiser-Destroyer Forces, United States Pacific Fleet, for winning the Battle Efficiency Competition for his ship and for winning Excellence Awards in Engineering, Gunnery, Anti-Submarine Warfare, and Operations. In July 1957, he returned to the Bureau of Naval Personnel for further duty. In December 1957, he was transferred to the Office of the Assistant Secretary of the Navy (Personnel and Reserve Forces), and served as special assistant for naval personnel until November 1958, then as special assistant and naval aide until August 1959.

Ordered to the first ship built from the keel up as a guided missile frigate, USS Dewey, built at the Bath (Maine) Iron Works, he assumed command of that frigate at her commissioning in December 1959, and commanded it until June 1961. During the period of his command, Dewey earned the Excellence Award in Engineering, Supply, Weapons, and was runner-up in the Battle Efficiency Competition. He was a student at the National War College, Washington, DC, during the 1961–1962 class year. In June 1962, he was assigned to the Office of the Assistant Secretary of Defense (International Security Affairs), Washington, DC, where he served first as desk officer for France, Spain, and Portugal, then as director of arms control and contingency planning for Cuba. From December 1963 until June 21, 1965, he served as executive assistant and senior aide to the Honorable Paul H. Nitze, Secretary of the Navy. For duty in his tour in the offices of the Secretary of Defense and the Secretary of the Navy, he was awarded the Legion of Merit.

After his selection for the rank of rear admiral, Zumwalt assumed command of Cruiser-Destroyer Flotilla Seven on 24 July 1965 in San Diego. He then served as Director, Systems Analysis Division, OPNAV (OP-96) from August 1966 to August 1968. In September 1968, he became Commander Naval Forces Vietnam and Chief of the Naval Advisory Group, United States Military Assistance Command Vietnam (MACV) and was promoted to vice admiral in October 1968. Zumwalt was the Navy adviser to General Creighton Abrams, Commander, MACV. Zumwalt always spoke very highly of Abrams, and said that Abrams was the most caring officer he had ever known.

Zumwalt's command was not a blue-water force, like the Seventh Fleet; it was a brown-water unit: he commanded the flotilla of Swift Boats that patrolled the coasts, harbors, and rivers of Vietnam. Among the swift-boat commanders were his son, Elmo Russell Zumwalt III, and later future Senator and Secretary of State, John Kerry. Among his other forces were Task Force 115, the Coastal Surveillance Force, Task Force 116, the River Patrol Force and Task Force 117, the joint Army-Navy Mobile Riverine Force.

President Richard Nixon nominated Zumwalt to be Chief of Naval Operations in April 1970. Upon being relieved as Commander Naval Forces Vietnam on May 15, 1970, he was awarded a second Navy Distinguished Service Medal for exceptionally meritorious service.

Zumwalt assumed duties as Chief of Naval Operations and was promoted to full admiral on July 1, 1970, and quickly began a series of moves intended to reduce racism and sexism in the Navy. These were disseminated in Navy-wide communications known as "Z-grams". These included orders authorizing beards (sideburns, mustaches, and longer groomed hair were also acceptable) and introducing beer-dispensing machines to barracks.

Zumwalt instituted the 'Mod Squad'—Destroyer Squadron 26 and later 31—to give promising young officers early command experience. Billets were a rank lower than normal.

Zumwalt reshaped the Navy's effort to replace large numbers of aging World War II-era vessels, a plan called "High-Low". Instituted over the resistance of Admiral Hyman Rickover and others, High-Low sought to balance the purchase of high-end, nuclear-powered vessels with low-end, cheaper ones—such as the Sea Control Ship—that could be bought in greater numbers. Rickover, the 'Father of the Nuclear Navy', preferred buying a few major ships to buying many ordinary ones. Zumwalt proposed four kinds of warships to fit the plan; in the end, only the Pegasus class of missile patrol boats and the Oliver Hazard Perry-class of guided missile frigates became reality, and only six of the planned 100+ Pegasus-class hydrofoils were built. The Oliver Hazard Perry class stood as the most numerous class of United States' warships since World War II until the advent of the Arleigh Burke-class destroyers. Zumwalt was the last Chief of Naval Operations to live at Number One Observatory Circle before it became the official residence of the vice president. For Zumwalt, not pleased with the choice, this was reason enough to challenge Virginia Senator Harry F. Byrd Jr. in the 1976 Senate election in Virginia.

"Z-gram" was the semi-official title for policy directives issued by Elmo Zumwalt as Chief of Naval Operations (CNO). Many of these directives were efforts to reform outdated policies potentially contributing to difficulties recruiting and retaining qualified naval personnel during the period of United States withdrawal from the Vietnam War.

After he retired, Zumwalt wrote On Watch: a Memoir, published by Quadrangle Books in 1976. It reviews his Navy career and includes reprints of all the Z-Grams he issued as CNO.

Also in 1976, Zumwalt unsuccessfully ran as a Democratic candidate for the United States Senate from Virginia, and was defeated by incumbent independent senator Harry F. Byrd Jr. by a 57% to 38% result. Later, he held the presidency of the American Medical Building Corporation in Milwaukee, Wisconsin.

While serving in Shanghai in 1945, Zumwalt met and married Mouza Coutelais-du-Roche, whose French-Russian family was living there. She returned with him to the United States. They had four children: Elmo Russell Zumwalt III; James Gregory Zumwalt; Ann F. Zumwalt Coppola; and Mouzetta C. Zumwalt-Weathers.

Zumwalt's eldest son, Elmo Zumwalt III, served as lieutenant on one of Zumwalt's patrol boats during the Vietnam War. In January 1983, he was diagnosed with lymphoma, and in 1985 it was discovered that he also had Hodgkin's disease. In addition, his grandson Elmo Russell Zumwalt IV had been born in 1977 with learning disabilities. Admiral Zumwalt and his family were convinced that both son and grandson were victims of Agent Orange, which the admiral had ordered to be sprayed over the Mekong Delta to kill vegetation and drive "the Viet Cong back 1,000 yards off the water's edge".

In an article published in The New York Times in 1986, Elmo Zumwalt III said:

Admiral Zumwalt and his son collaborated with writer John Pekkanen to create the book My Father, My Son, published by MacMillan in September 1986, where they discussed the family tragedy of his son's battle with cancer. In 1988, the book was made into a TV movie with the same name, starring Karl Malden as the admiral and Keith Carradine as his son. Elmo Zumwalt III died from his cancer on August 14, 1988, at the age of 42, three months after the TV movie was shown.

During his son's illness in the early 1980s, Admiral Zumwalt was very active in lobbying Congress to establish a national registry of bone marrow donors. Such donors serve patients who do not have suitably matched bone marrow donors in their families. Though his son ultimately was able to receive a transplant from his own sister, many patients don't have close relatives who are able and willing to help in this way. As such, his efforts were a major factor in the founding of the National Marrow Donor Program (NMDP) in July 1986. Admiral Zumwalt was the first chairman of the NMDP's Board of Directors.

In his later years, Zumwalt resided in Arlington County, Virginia. 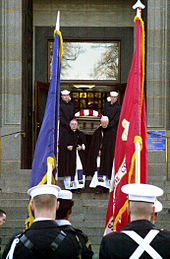 Zumwalt's casket being carried by pallbearers at his funeral in January 2000.

Zumwalt died on January 2, 2000, aged 79, at the Duke University Medical Center in Durham, North Carolina from mesothelioma. His funeral service was held at the Naval Academy Chapel. In his eulogy President Bill Clinton called Zumwalt "the conscience of the United States Navy".

The United States Navy's DD(X) guided missile destroyer program has been named the Zumwalt class in his honor, and its lead ship, USS Zumwalt, bears his name by Navy tradition.

In 2013, the Mesothelioma Center for Excellence at the West Los Angeles VA Medical Center was renamed the Elmo Zumwalt Treatment & Research Center. It specializes in mesothelioma research, particularly for veterans who may have been exposed to asbestos during their service.

United States Naval Academy Midshipman – Class of 1943, which graduated on 19 June 1942 due to wartime necessity.