Emperor Yōzei (陽成天皇, Yōzei-tennō, January 2, 869 – October 23, 949) was the 57th emperor of Japan, according to the traditional order of succession.

Yōzei was the oldest son of Emperor Seiwa. His mother was the Empress Fujiwara no Takaiko, who was also known after Seiwa's abdication as the Nijō empress. Yōzei's mother was the sister of Fujiwara no Mototsune, who would figure prominently in the young emperor's life.

In ancient Japan, there were four noble clans, the Gempeitōkitsu (源平藤橘). One of these clans, the Minamoto clan (源氏) are also known as Genji, and of these, the Yōzei Genji (陽成源氏) are descended from the 57th emperor Yōzei.

Yōzei had nine Imperial children, born after he had abdicated.

Yōzei was made emperor when he was an immature, unformed young boy.

According to very scanty information from the Imperial archives, including sources such as Rikkokushi, and Nihon Sandai Jitsuroku, Emperor Yōzei murdered one of his retainers, an action that caused massive scandal in the Heian court. Japanese society during the Heian era was very sensitive to issues of "pollution," both spiritual and personal. Deaths (especially killing animals or people) were the worst acts of pollution possible, and warranted days of seclusion in order to purify oneself. Since the Emperor was seen as a divine figure and linked to the deities, pollution of such extreme degree committed by the highest source was seen as extremely ruinous. Many of the high court officials construed Emperor Yōzei's actions as exceeding the bounds of acceptable behavior, and as justifiable cause for the emperor to be forcibly deposed.

In Kitabatake Chikafusa's 14th-century account of Emperor Yōzei's reign, the emperor is described as possessing a "violent disposition" and unfit to be a ruler. In the end, when Fujiwara no Mototsune, who was Sesshō (regent for the child-emperor, 876–880), Kampaku (chief advisor or first secretary for the emperor, 880–890), and Daijō Daijin (Great Minister of the Council of State), decided that Yōzei should be removed from the throne, he discovered that there was general agreement amongst the kuge that this was a correct and necessary decision.

Yōzei was succeeded by his father's uncle, Emperor Kōkō; and in the reign of Kōkō's son, Emperor Uda, the madness re-visited the tormented former emperor:

Yōzei lived in retirement until the age of 80. 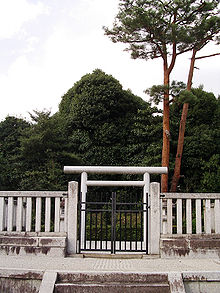 The actual site of Yōzei's grave is known. This emperor is traditionally venerated at a memorial Shinto shrine (misasagi) at Kyoto.

The Imperial Household Agency designates this location as Yōzei's mausoleum. It is formally named Kaguragaoka no Higashi no misasagi.

Kugyō (公卿) is a collective term for the very few most powerful men attached to the court of the Emperor of Japan in pre-Meiji eras.

In general, this elite group included only three to four men at a time. These were hereditary courtiers whose experience and background would have brought them to the pinnacle of a life's career. During Yozei's reign, this apex of the Daijō-kan included:

The years of Yōzei's reign are more specifically identified by more than one era name or nengō. During this time, the tradition of naming eras because of good omens changed. Instead, the name of an era might be chosen to limit the effects of something bad.