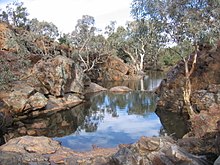 The ephemeral nature of Granite Plateau Creek on the Mawson Plateau, means the creek is usually a series of waterholes. 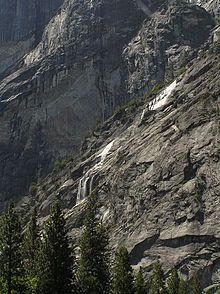 Staircase Falls in Yosemite National Park only flows after heavy rainfall or snowmelt.

Home Reef has repeatedly breached the surface and been subsequently eroded by wave action. 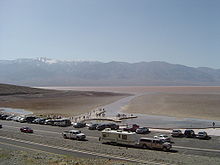 Ephemerality (from the Greek word εφήμερος, IPA: [/eˈfi.me.ros/], meaning 'lasting only one day') is the concept of things being transitory, existing only briefly. Typically the term ephemeral is used to describe objects found in nature, although it can describe a wide range of things, including human artifacts intentionally made to last for only a temporary period, in order to increase their perceived aesthetic value. With respect to unique performances, for example, it has been noted that "[e]phemerality is a quality caused by the ebb and flow of the crowd's concentration on the performance and a reflection of the nostalgic character of specific performances". Because different people may value the passage of time differently, "the concept of ephemerality is a relative one".

An ephemeral waterbody is a wetland, spring, stream, river, pond or lake that only exists for a short period following precipitation or snowmelt. They are not the same as intermittent or seasonal waterbodies, which exist for longer periods, but not all year round.

Examples of ephemeral streams are the Luni river in Rajasthan, India, Ugab River in Southern Africa, and a number of small ephemeral watercourses that drain Talak in northern Niger. Other notable ephemeral rivers include the Todd River and Sandover River in Central Australia as well as the Son River, Batha River and the Trabancos River.

Any endorheic basin, or closed basin, that contains a playa (dry lake) at its drainage lowpoint can become an ephemeral lake. Examples include Lake Carnegie in Western Australia, Lake Cowal in New South Wales, Mystic Lake and Rogers Lake in California, and Sevier Lake in Utah. Even the driest and lowest place in North America, Death Valley (more specifically Badwater Basin), became flooded with a short-lived ephemeral lake in the spring of 2005.

There are also ephemeral islands such as Banua Wuhu and Home Reef. These islands appear when volcanic activity increases their height above sea level, but disappear over several years due to wave erosion. Bassas da India, on the other hand, is a near-sea level island that appears only at low tide.

Many plants are adapted to an ephemeral lifestyle, in which they spend most of the year or longer as seeds before conditions are right for a brief period of growth and reproduction. The spring ephemeral plant mouse-ear cress is a well-known example.

Animals can be ephemeral, with brine shrimp and the mayfly being examples. The placenta is considered an ephemeral organ present during gestation and pregnancy.

Ephemeral can also be used as an adjective to refer to a fast-deteriorating importance or temporary nature of an object to a person. Brands are notoriously ephemeral assets, and magazine publishing was once much more ephemeral than it is today, as was television programming. A film made by a particular sponsor for a specific purpose other than as a work of art may be called an ephemeral film, because the film itself can continue to exist after the social or commercial context for its creation has disappeared.

During the Baroque period, wealthy patrons would commission ephemeral creations from well-known artists of the time. These creations, often very expensive and time-consuming, were typically only used during one event before being dismantled or destroyed. One such work was the temporary volcano, created by Gianlorenzo Bernini for the Barberini family. The volcano, placed on the predecessor to the Spanish Steps, took three months to create and was destroyed in a firework display over the course of an hour.

Retrieved from "https://en.wikipedia.org/w/index.php?title=Ephemerality&oldid=1009458373"
Uses material from the Wikipedia article Ephemerality, released under the CC BY-SA 3.0 license.