Esquire is an American men's magazine. In the United States, it has been published by the Hearst Corporation since 1986, also having over 20 international editions.

Founded in 1933, it flourished during the Great Depression and World War II under the guidance of founders Arnold Gingrich, David A. Smart and Henry L. Jackson while during the 1960s it pioneered the "new journalism" movement. After a period of quick and drastic decline during the 1990s, the magazine revamped itself as a lifestyle-heavy publication under the direction of David Granger.

Esquire was first issued in October 1933 as an offshoot of trade magazine Apparel Arts (which later became Gentleman's Quarterly; both Esquire and GQ would share common ownership for almost 45 years). The magazine was first headquartered in Chicago and then, in New York City. It was founded and edited by David A. Smart, Henry L. Jackson and Arnold Gingrich. Jackson died in the crash of United Airlines Flight 624 in 1948, while Gingrich led the magazine until his own death in 1976. Smart died in 1952, although he left Esquire in 1936 to found a different magazine for the company, Coronet. The founders all had different focuses; Gingrich specialized in publishing, Smart led the business side of the magazine while Jackson led and edited the fashion section, which made up most of the magazine in its first fifteen years of publishing. Additionally, Jackson's Republican political viewpoints contrasted with the liberal Democratic views of Smart, which allowed for the magazine to publish debates between the two.

Esquire initially was supposed to have a quarterly press run of a hundred thousand copies. It cost fifty cents per copy (equivalent to $9.88 today). However, demand was so high that by its second issue (January 1934), it transformed itself into a more refined periodical with an emphasis on men's fashion and contributions by Ernest Hemingway, F. Scott Fitzgerald, Alberto Moravia, André Gide, and Julian Huxley.

In the 1940s, the popularity of the Petty Girls and Vargas Girls, particularly among the Armed Forces provided a circulation boost, but also proved controversial: in 1943, the Democratic United States Postmaster General Frank Comerford Walker brought charges against the magazine on behalf of the administration of Franklin Delano Roosevelt, which alleged that Esquire had used the US Postal Service to promote "lewd images". Republicans opposed the lawsuit and in 1946 the United States Supreme Court found in Hannegan v. Esquire, Inc., 327 U.S. 146 (1946), that Esquire's right to use the Postal Service was protected by the First Amendment of the United States Constitution.

Beginning with its second number, a blond, pop-eyed, mustachioed character named "Esky" (created by cartoonists E. Simms Campbell and Sam Berman), graced almost every Esquire front page for over a quarter of a century, depicting the refined character of the magazine and its readership, mostly in the form of figurines, although during the 1950s, a stylized design of his face would often appear. Beginning in 1962, Esky would be featured as the dot on the "I" of the logo until it was changed in 1978. After then, the character would be occasionally revived, most notably during the 1980s and 1990s, a short-lived "Esky" award given to popular rock bands during the 2000s and during Jay Fielden's tenure in the 2010s.

Under Harold Hayes, who ran it from 1961 to 1973, Esquire became as distinctive as its oversized pages, helping pioneer the trend of New Journalism by publishing such writers as Norman Mailer, Tim O'Brien, John Sack, Gay Talese, Tom Wolfe, and Terry Southern. In the mid 1960s, Esquire partnered with Verve Records to release a series of "Sound Tour" vinyl LPs that provided advice and music for traveling abroad. In August 1969, Esquire published Normand Poirier's piece, "An American Atrocity", one of the first reports of American atrocities committed against Vietnamese civilians. Like many other magazines of the era, Esquire shrank from the traditional large-magazine format (about 10-1/4"x13-3/8") to the smaller standard 8½×11 inches in 1971. 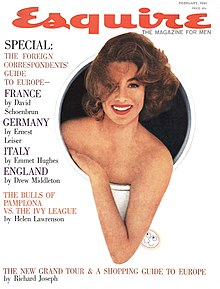 The cover of Esquire from February 1961

The arrival of male-oriented lifestyle publications during the early 1990s and the problems of the magazine industry during the middle of the decade led to a sustained decline in circulation that threatened the future of Esquire, which had relied upon an elegant, highly-literate audience (during the second half of the 1980s it published a year-end register featuring leading cultural figures under 40 years of age) but did not appeal to younger men. David M. Granger was named editor-in-chief of the magazine in June 1997, fresh from a six-year stint at GQ, which he turned around from its fashion-heavy tradition Since his arrival, the magazine received numerous awards, including multiple National Magazine Awards. Its award-winning staff writers include Tom Chiarella, Scott Raab, Mike Sager, Chris Jones, John H. Richardson, Cal Fussman, Lisa Taddeo, and Tom Junod. Famous photographers have also worked for the magazine, among which fashion photographer Gleb Derujinsky, and Richard Avedon. In spite of its success, the magazine under Granger became increasingly criticized for its focus on the so-called metrosexual culture (a criticism he previously had late in his GQ tenure). David Granger stepped down in 2016, being replaced by Jay Fielden, who revamped the magazine into its more classical up-market style. At the same time, its political coverage became more comprehensive, following a trend among American magazine publications in general. After a series of shake-ups at Hearst's magazine division, Michael Sebastian became editor in mid-2019, reverting to its 2000s-era style.

In September 2006, the magazine launched a special style-focused issue entitled The Big Black Book, which beginning in 2009 was published twice a year until the Spring/Summer issue ran for the last time in 2018.

In 2010, the June and July issues were merged as were the December and January issues in 2015, and in 2018 the magazine moved to eight issues per year.

From 1969 to 1976, Gordon Lish served as fiction editor for Esquire and became known as "Captain Fiction" because of the authors whose careers he assisted. Lish helped establish the career of writer Raymond Carver by publishing his short stories in Esquire, often over the objections of Hayes. Lish is noted for encouraging Carver's minimalism and publishing the short stories of Richard Ford. Using the influential publication as a vehicle to introduce new fiction by emerging authors, he promoted the work of such writers as T. Coraghessan Boyle, Barry Hannah, Cynthia Ozick and Reynolds Price.

In February 1977, Esquire published "For Rupert – with no promises" as an unsigned work of fiction: this was the first time it had published a work without identifying the author. Readers speculated that it was the work of J. D. Salinger, the reclusive author best known for The Catcher in the Rye. Told in first-person, the story features events and Glass family names from the story "For Esmé – with Love and Squalor". Gordon Lish is quoted as saying, "I tried to borrow Salinger's voice and the psychological circumstances of his life, as I imagine them to be now. And I tried to use those things to elaborate on certain circumstances and events in his fiction to deepen them and add complexity."

During the mid-late 1980s, the magazine's June "Summer Reading" issues featured a full-length fiction story accompanied by shorter pieces, all written for the magazine.

Although the magazine greatly reduced its fiction content during the 1990s in line with most other magazines, it has nevertheless continued to publish fiction in occasion. Writer Elizabeth Gilbert debuted in Esquire in 1993, while Chris Adrian, Nathan Englander, Benjamin Percy, and Patrick Somerville among others have also contributed to the magazine. Other writers who have recently appeared in Esquire include Ralph Lombreglia, James Lee Burke, and Stephen King.

In 2007 Esquire launched the Napkin Fiction Project, in which 250 cocktail napkins were mailed to writers all over the country by the incoming fiction editor, in a playful attempt to revive short fiction—"some with a half dozen books to their name, others just finishing their first." In return, the magazine received nearly a hundred stories. Rick Moody, Jonathan Ames, Bret Anthony Johnston, Joshua Ferris, Yiyun Li, Aimee Bender, and ZZ Packer are among the notable writers included.

For many years, Esquire has published its annual Dubious Achievement Awards, lampooning events of the preceding year. As a running gag, the annual article almost always displayed an old photo of Richard Nixon laughing, with the caption, "Why is this man laughing?" However, the February 2006 "Dubious Achievement Awards" used the caption under a photo of W. Mark Felt, the former FBI official revealed in 2005 to be "Deep Throat", the source for Bob Woodward and Carl Bernstein to uncover the Watergate scandal. The magazine did continue the Nixon photo in February 2007, referring to a poll stating that George W. Bush had surpassed Nixon as the "worst president ever".

A popular running gag featured in the "Dubious Achievements of 1990" edition involved especially egregious achievements headlined with "And then they went to Elaine's.", referring to a popular restaurant in New York City that closed in May 2011.

Esquire did not publish "Dubious Achievement Awards" for 2001, but resumed them with the 2002 awards, published in the February 2003 issue.

"Dubious Achievement Awards" were discontinued in 2008, according to an editor's note in the January 2008 issue, considering that the overabundance of imitators had made the feature superfluous. However, after a nine-year hiatus, the feature was revived in the January 2017 issue with a skewering of 2016 events.

The annual Sexiest Woman Alive feature ran between 2003 and 2015, billed as a benchmark of female attractiveness.

Originally, it was a part of the "Women We Love" issue that had appeared yearly since 1988 (after being a section of "The Passions of Men" issue, June 1987), being initially titled "Woman of the Year". To build interest, the magazine would do a tease, releasing partial images of the woman in the issues preceding the November issue. By 2007, it had become the dominating story of the issue and to create an element of surprise the hints were abandoned.