Executive Order 13767, titled Border Security and Immigration Enforcement Improvements, was issued by United States President Donald Trump on January 25, 2017. The order directs a wall, colloquially called the "Trump wall", to be built along the Mexico–United States border. On December 22, 2018, the federal government went into a shutdown due to Trump's demand for $5.6 billion in federal funds to begin work on the wall. By January 12, 2019, the shutdown became the longest budget shutdown in U.S. history.

The wall was a central presidential campaign promise. Trump stated in his 2015 announcement speech that the U.S. would "have Mexico pay for that wall", and Mexican president Enrique Peña Nieto has stated that the country would "never pay for a wall". The Trump administration sought $18 billion in funding.

In late 2017 the Department of Homeland Security paid about $3 million for the construction of eight prototypes near San Diego, California, with local taxpayers spending about $2.3 million in security. In November 2017 SWF Construction won an $18 million contract to replace an existing 2-mile wall in Calexico, California. Construction began in February 2018.

As of March 2019, U.S. Customs and Border Protection confirmed that although they had begun replacement fencing, no new walls had yet been built.

As of October 2019, 15 construction sites are currently planned or under way along the Southern US border to construct various segments of both new and replacement border barrier. 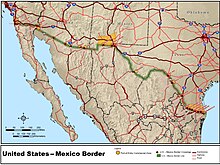 The executive order, signed on January 25, 2017, calls for the construction of "a physical wall along the southern border" and defines wall as "a contiguous, physical wall or other similarly secure, contiguous, and impassable physical barrier."

The order did not estimate a cost for the wall project. An internal report by the Department of Homeland Security acquired by Reuters in February 2017 estimated that Trump's proposed border wall would take an estimated 3.5 years to build and cost $21.6 billion. The cost was higher than estimates given by Trump during the campaign, in part because it accounted for the time and cost of acquiring the required private land on the border.

On December 22, 2018, the federal government went into a shutdown due to Trump's demand for $5.6 billion in federal funds for a wall on the US–Mexico border. On January 12, 2019, the shutdown became the longest budget shutdown in U.S. history.