A member of snooker's main tour since turning professional in 1991, O'Brien has been ranked within the world's top 64 players since 1994, reaching his highest position, 9th, for the 2000–01 season. He has won one ranking title - the 1999 British Open, where he defeated Anthony Hamilton 9–7 in the final - and reached two other major finals, notably in the 2001 Masters.

O'Brien is, along with Yan Bingtao, one of only two players to score a century in their first frame at the World Championships in the Crucible, which he achieved against Alan McManus in 1994 (though he lost the match 10–7 and did not qualify again until 1998). His greatest achievement was winning the British Open in 1999, beating Anthony Hamilton 9–7 in the final. Hamilton opened with two centuries, but O'Brien won five frames on the final black to defeat the Nottingham man.

O'Brien also came close to winning the Masters title in 2001. After beating Mark Williams, Ken Doherty and Dave Harold, he lost in the final to Paul Hunter after leading 7–3. He has reached one further ranking final, and three semi-finals

O'Brien peaked at No. 9 in the rankings following his sole title, but nosedived after this. He narrowly retained his top 16 place for the 2001/2002 season, but dropped out a year later – and then out of the top 32 a year later. Three further falls down the rankings left him at No. 45, before beginning to recover. 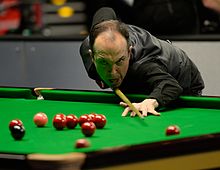 O'Brien started the 2007–08 campaign in Shanghai where he had beaten Paul Davies and Barry Hawkins in qualifying rounds, however, he lost to Steve Davis in the first round. O'Brien also qualified for the Grand Prix but lost four of his group matches to finish 5th in his group ahead of only Graeme Dott.

After qualifying for the main draw of the 2007 Northern Ireland Trophy by beating Barry Pinches in a deciding frame, O'Brien went on to beat Dave Harold in the first round of the main draw. Victories over John Higgins (in a decider), Barry Hawkins and Ronnie O'Sullivan, before he reached the second ranking-event final of his career by beating Mark Allen by 6 frames to 3. He lost the final to Stephen Maguire, 5–9. This run helped him return to the top 32 of the Snooker world rankings 2007/2008, but the early part of the 2008–09 season proved disappointing, O'Brien not reaching the last sixteen of any of the first four tournaments.

As of the end of 2009 O'Brien had compiled 101 competitive century breaks in his career.

On 12 April 2017, O’Brien qualified for the 2017 World Snooker Championship after a record-breaking victory in the final qualifying round match against David Gilbert. The final frame set the record for the longest frame of the modern era, lasting 123 minutes and 41 seconds.