This article is about a character foil. For other types of foil, see Foil (disambiguation). 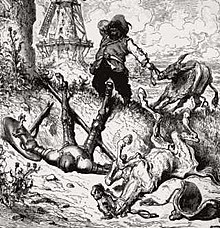 Don Quixote and his sidekick Sancho Panza, as illustrated by Gustave Doré: the characters' contrasting qualities are reflected here even in their physical appearances

A foil usually either differs dramatically or is an extreme comparison that is made to contrast a difference between two things. Thomas F. Gieryn places these uses of literary foils into three categories, which Tamara A. P. Metze explains as: those that emphasize the heightened contrast (this is different because ...), those that operate by exclusion (this is not X because...), and those that assign blame ("due to the slow decision-making procedures of government...").

The word foil comes from the old practice of backing gems with foil to make them shine more brightly.

In Emily Brontë's Wuthering Heights, Edgar Linton is described as opposite to main character Heathcliff, in looks, money, inheritance and morals, however similar in their love for Catherine.

In Frankenstein, by Mary Shelley, the two main characters—Dr. Frankenstein and his "creature"—are both together literary foils, functioning to compare one to the other.

In David Copperfield, by Charles Dickens, Edward Murdstone's marriage to David's mother Clara, contrasts with David's future marriage to Dora Spenlow, presented with a different outcome if David had endeavored to subdue his wife's caprices, as did Edward Murdstone with Clara's.

In Jane Austen's Pride and Prejudice, Mary's absorption in her studies places her as a foil to her sister Lydia Bennet's lively and distracted nature.

Similarly, William Shakespeare's tragedy Julius Caesar, the character Brutus has foils in the two characters, Cassius and Mark Antony. In the play Romeo and Juliet, Romeo and Mercutio serve as character foils for one another, as well as Macbeth and Banquo in his play Macbeth. In the tragedy Hamlet, a foil is created between Laertes and Prince Hamlet to elaborate the differences between the two men. In Act V Scene 2, Prince Hamlet tells Laertes that he will fence with him and states, "I'll be your foil, Laertes" (5.2.272). This word play reveals the foil between Hamlet and Laertes, that was developed throughout the play.

In the Harry Potter series, Draco Malfoy can be seen as a foil to the Harry Potter character; Professor Snape enables both characters "to experience the essential adventures of self-determination" but they make different choices; Harry chooses to oppose Lord Voldemort and the Death Eaters wholeheartedly, whereas Draco struggles with his allegiances through the whole series.

George and Lennie are foils to each other in John Steinbeck's Of Mice and Men. Lennie is huge and strong as a bull but is also mentally slow, while on the other hand George is small, skinny and very smart.