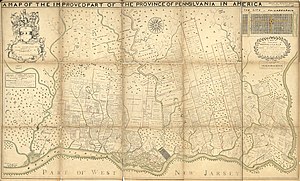 Frankford is a neighborhood in the Northeast section of Philadelphia situated about six miles (10 km) Northeast of Center City. Although its borders are vaguely defined, the neighborhood is bounded roughly by the original course of Frankford Creek on the south to Adams Avenue on the southwest, to Roosevelt Boulevard on the west border to Bridge Street on the north to the Trenton Line on the east. Adjacent neighborhoods are Bridesburg, Kensington, Juniata, Oxford Circle, Summerdale, and Wissinoming. Historically, Frankford had an unofficial division separating Frankford (proper) from East Frankford encompassing the area east of Frankford Avenue. The division divided the community first along racial lines, with African Americans on the east of Frankford Avenue and Caucasians to the west. As the community has become less homogeneous, the division is more of a vestige of the past. 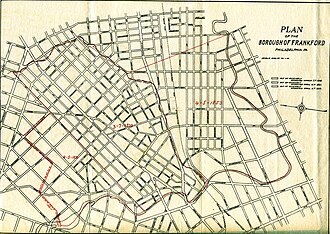 Map of Philadelphia County, Pennsylvania Showing Frankford Borough prior to and after the Act of Consolidation, 1854

The village of Frankford was established by the Quakers in about 1682 in an area already occupied by Swedes and Germans. The land known as the Manor of Frank was purchased by the Society of Free Traders, a group of Quaker businessmen in England. The original settlers were Henry Waddy, Thomas Fairman, Robert Adam and Edward Seary. The village very likely took its name from the title of the Frankfurt Company, which took up ground there, along what is now known as Frankford Creek, in the lower part of Oxford Township. Frankford Creek's upper tributaries were the Tacony Creek and the Wingohocking Creek. Frankford was an early suburb of the town of Philadelphia. William Penn forged a trail through the village running from the original town (now Center City) to New York City, passing through Bucks County near the site of his home, Pennsbury Manor. That trail came to be known as "Frankford Pike" (later Frankford Avenue) and was the town's main street.

The village was incorporated into a borough on March 2, 1800, bounded by Leiper Street on the northwest, Little Tacony (or Tackawanna) Creek on the south and east, and Frankford Creek on the west. By act on April 4, 1831, the boundaries of the borough were extended to include land to the northwest of Leiper Street, the line running along Harrison and Horrocks Streets, to a point on Frankford Creek below Wyoming Avenue. In 1853, the part of Whitehall Borough lying between Torresdale and Frankford Avenues below what is now Whitehall Common was added, to encompass a total of 1.468 square miles. In 1854, the borough was annexed by the city of Philadelphia through the Act of Consolidation, 1854.

Frankford was historically a manufacturing center, beginning with a gristmill constructed in the 1660s. This same mill became famous during the American Revolutionary War due to the heroics of Lydia Darrah. 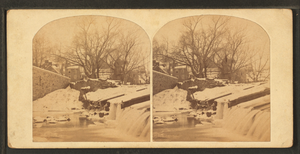 Before and during the Revolution, two lesser-known grist-mills operated on the creek above the town of Frankford.

In 1771, Robert Morris (a miller) purchased a mill at the junction of the Tacony Creek and Frankford Creek.

On November 25, 1773, after receiving permission to dam the creek from a Quaker named Nicholas Waln, a feme-sole trader named Mary Peters also established a small grist mill. She was in a partnership with Richard Whitman of Oxford Township, Philadelphia County.

Frankford also has the distinction of having played a role in the Declaration of Independence.

Frankford was also the site of a gunpowder mill that became famous because of its association with Oswald Eve and Paul Revere.

In the 19th century, the town became a center for textile production. Other manufacturing industries also flourished. An early description of industry in 1837: 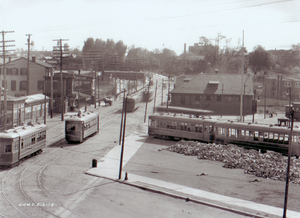 Frankford Terminal in 1918, before the construction of the Frankford El.

The Frankford Arsenal rivaled the Philadelphia Navy Yard during World War II. It provided over 22,000 jobs and at its peak, produced 8 million bullets per day.

In 1922, the Frankford Elevated Line opened, connecting to the Market Street Elevated to provide rapid-transit access to Center City and West Philadelphia. The terminus of today's SEPTA Market-Frankford Line, now known as the Frankford Transportation Center, became a major transit hub, with connections to bus and trolley routes extending into Northeast Philadelphia. Residents of Frankford live within walking distance of the terminal. SEPTA's elevated train (the "El") runs through the neighborhood above Frankford Avenue.

Although the Frankford Line helped to catapult Frankford Avenue into a major shopping district in the early 20th century, the traditionally working-class neighborhood saw decline in the 1950s as many Philadelphians moved to the suburbs. White flight eventually took its hold on the neighborhood throughout the 1970s and 1980s. By 1990, over 30% of the storefronts on Frankford Avenue were vacant. Since this time, Frankford has seen a push for improvement. In 1993, the Philadelphia City Planning Commission adopted the Frankford Plan as a blueprint for revitalizing the neighborhood. Although many vacant storefronts remain, businesses catering to new customers have opened in recent years.

Many business owners hope that gentrification of neighborhoods such as Fishtown and Kensington will spread north into Frankford. Others worry that previous attempts at improving Frankford have not been as effective as hoped, with most areas of the neighborhood still suffering from street crime and open-air drug sales. Between 1985 and 1990, a serial killer known as the "Frankford Slasher" murdered several women in the neighborhood; although several suspects were taken into custody, the actual killer has never been identified.

Within the bounds of Frankford exists an enclave known as Northwood. Northwood is made up almost entirely of pre-World War II twin and single-family dwellings. Northwood is bounded by Harrison Street to the south, Roosevelt Boulevard to the west and Oxford Avenue to the east, its northernmost point being Sanger Street, just below the intersection of Castor Avenue, Roosevelt Blvd (U.S. 1) and Oxford Avenue. However, a more broad definition of Northwood would extend to Adams Avenue on the south, including the location of Northwood Park and the larger mansions on Castor Avenue south of Harrison Street.

Three of Frankford's schools lie within Northwood. Other facilities in Northwood include Frankford High School's War Memorial Stadium, built in honor of area residents who served in World War I, and Baldwin Field, named for Matthias W. Baldwin of the former Baldwin Locomotive Works and his family.

The neighborhood is home to a mostly middle-class population. The neighborhood was also home to former Philadelphia mayor and Representative from the 5th (then 3rd) Congressional District William J. Green, III, and the late Edward Roy Becker, former justice on the Third Circuit Court of Appeals for the United States.

In 1881, Alfred and Louis Burk founded Louis Burk, Inc., Philadelphia meat packers, and also built the original Atlantic City Steel Pier in 1898. Several other brothers were engaged in this family-run business. (Another brother, Henry Burk, was a well-known local politician.)

As real-estate investors and developers in Philadelphia, they bought and sold large parcels of land in Northwood. To protect the integrity of the neighborhood, Louis Burk placed several various deed restrictions upon many of the tracts he sold. One variant form:

The Northwood Civic Association received its charter of incorporation as a Pennsylvania not-for-profit corporation during a meeting held in City Hall, Room 577, Philadelphia, Pennsylvania, on Thursday, July 25, 1963, at 3:00 P.M., E.D.S.T., there being present: ISRAEL STIEFEL, ESQ., THE MASTER: BECKER & BECKER BY EDWARD R. BECKER, ESQ., For Petitioners.

ARTICLE I. NAME and PURPOSE

Section 1. The name of the Association shall be Northwood Civic Association.

Section 3. For the purposes of the Association, the boundaries of the community shall run along the East side of the Roosevelt Boulevard from the Southern line of Friends Hospital to Castor Avenue and Sanger Street; Sanger Street to Oxford Avenue; West side of Oxford Avenue to proximity of Leiper Street; proximity of Leiper Street to Orthodox Street; South side of Orthodox Street to Castor Avenue, Castor Avenue to Wyoming Avenue; Wyoming Avenue to Ramona Avenue; Ramona Avenue to Fishers Lane, Fishers Lane to the Southern line of Friends Hospital North to East side of Roosevelt Boulevard.

Frankford was the hunting ground for the "Frankford Slasher", who stalked victims between 1985 and 1990.

The intersection of Bridge Street and Hawthorne Street was listed number six in a 2007 list of the city's top ten recreational drug corners according to an article by Philadelphia Weekly reporter Steve Volk.

Frankford, like all areas of Philadelphia, is served by the School District of Philadelphia. In particular Frankford High School has been the community's public high school since 1910. In addition to public schools, Frankford Friends School, a private Pre-Kindergarten through 8th grade school, is in Frankford [1]. The Free Library of Philadelphia also operates the Frankford Branch in the neighborhood.

The community was the home of the Frankford Yellow Jackets, a National Football League team that won the championship in 1926 but folded in 1931. Frankford is also home to the N.E. Frankford Boys and Girls Club American Legion Post 224 Drill Team, who won the AMA Nationals Championship in 2005 and 2006. Also part of the community for decades was the Frankford Boys Club. It was an organization that gave Frankford youth an opportunity to learn how to play football, baseball and basketball as part of NESAC. The Boys Club was one of NESAC flagship organizations and participated in many playoff games and championship victories.