Frederick of Nassau, Lord of Zuylestein (1624–1672) was an illegitimate son of Frederick Henry, Prince of Orange, by Margaretha Catharina Bruyns,

On 15 March 1640, Frederick's father gave him Castle Zuylestein (also spelled Zuylenstein) - situated about twenty miles east of the city of Utrecht, and with it he also gave him the title Lord of Zuylestein (in Dutch: Heer van Zuylestein). Furthermore, he made Frederick captain of infantry for the state.
In 1659, Frederick was made governor of the household of his nephew, William III of Orange. Through lobbying by Johan de Wit, William III became the state's ward in 1666, and Frederick was dismissed. His dismissal was because he was married to an Englishwoman and was under suspicion of pro-English leanings. In April 1672 (the rampjaar) he became general of the infantry and in August he became involved in the murders of Johan and Cornelis de Wit.

On 16 October 1648, Frederick married Mary Killigrew (born 1627) in The Hague. She was a daughter of Sir William Killigrew (a favourite of Charles I and Charles II of England) and Mary Hill, of Honilay. She was a first cousin of Charles II's illegitimate daughter, the Countess of Yarmouth. She had moved to the Netherlands in February 1644, aged barely seventeen, as a maid of honour to Mary, princess royal of England and princess of Orange.

Frederick and Mary had two children:

In October 1672 Frederick died near Woerden in a battle with the French known as the Battle of Kruipin. 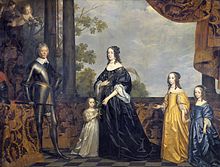 Prince Frederick Henry and his wife Amalia of Solms-Braunfels with their three youngest daughters, portrayed by Gerard van Honthorst.

Frederick was an illegitimate son of Frederick Henry, Prince of Orange, born to him before he married. Frederick had nine legitimate half-siblings with whom he shared his father. Their mother was his father's wife Amalia of Solms-Braunfels.

Frederick used the arms below.

This section is transcluded from House of Nassau. (edit | history)