This article is about the Elector of Brandenburg. For the King in Prussia, see Frederick William I of Prussia.
Duke of Prussia

Frederick William (German: Friedrich Wilhelm; 16 February 1620 – 29 April 1688) was Elector of Brandenburg and Duke of Prussia, thus ruler of Brandenburg-Prussia, from 1640 until his death in 1688. A member of the House of Hohenzollern, he is popularly known as "the Great Elector" (der Große Kurfürst) because of his military and political achievements. Frederick William was a staunch pillar of the Calvinist faith, associated with the rising commercial class. He saw the importance of trade and promoted it vigorously. His shrewd domestic reforms gave Prussia a strong position in the post-Westphalian political order of north-central Europe, setting Prussia up for elevation from duchy to kingdom, achieved under his son and successor.

Following the Thirty Years' War that devastated much of the Holy Roman Empire, Frederick William focused on rebuilding his war-ravaged territories. Brandenburg-Prussia benefited from his policy of religious tolerance and he used French subsidies to build up an army that took part in the 1655 to 1660 Second Northern War. This ended with the treaties of Labiau, Wehlau, Bromberg and Oliva; they removed Swedish control of the Duchy of Prussia, which meant he held it direct from the Holy Roman Emperor.

In 1672, Frederick William joined the Franco-Dutch War as an ally of the Dutch Republic, led by his nephew William of Orange but made peace with France in the June 1673 Treaty of Vossem. Although he rejoined the anti-French alliance in 1674, this left him diplomatically isolated; despite conquering much of Swedish Pomerania during the Scanian War, he was obliged to return these to Sweden in the 1679 Treaty of Saint-Germain-en-Laye.

Frederick William was a military commander of wide renown, and his standing army would later become the model for the Prussian Army. He is notable for his joint victory with Swedish forces at the Battle of Warsaw, which, according to Hajo Holborn, marked "the beginning of Prussian military history", but the Swedes turned on him at the behest of King Louis XIV and invaded Brandenburg. After marching 250 kilometres in 15 days back to Brandenburg, he caught the Swedes by surprise and managed to defeat them on the field at the Battle of Fehrbellin, destroying the myth of Swedish military invincibility. He later destroyed another Swedish army that invaded the Duchy of Prussia during the Great Sleigh Drive in 1678. He is noted for his use of broad directives and delegation of decision-making to his commanders, which would later become the basis for the German doctrine of Auftragstaktik, and for using rapid mobility to defeat his foes.

Frederick William raised an army of 40,000 soldiers by 1678, through the General War Commissariat presided over by Joachim Friedrich von Blumenthal. He was an advocate of mercantilism, monopolies, subsidies, tariffs, and internal improvements. Following Louis XIV's revocation of the Edict of Nantes, Frederick William encouraged skilled French and Walloon Huguenots to emigrate to Brandenburg-Prussia with the Edict of Potsdam, bolstering the country's technical and industrial base. On Blumenthal's advice he agreed to exempt the nobility from taxes and in return they agreed to dissolve the Estates-General. He also simplified travel in Brandenburg and the Duchy of Prussia by connecting riverways with canals, a system that was expanded by later Prussian architects, such as Georg Steenke; the system is still in use today.

In his half-century reign, 1640-1688, the Great Elector transformed the small remote state of Prussia into a great power by augmenting and integrated the Hohenzollern family possessions in northern Germany and Prussia. When he became elector (ruler) of Brandenburg in 1640, the country was in ruins from the Thirty Years War; it had lost half its population from war, disease and emigration. The capital Berlin had only 6,000 people left when the wars ended in 1648. He united the multiple separate domains that his family had acquired primarily by marriage over the decades, and built the powerful unified state of Prussia out of them. His success in rebuilding the lands and his astute military and diplomatic leadership propelled him into the ranks of the prominent rulers in an era of "absolutism". Historians compare him to his contemporaries such as Louis XIV of France (1661–1715), Peter the Great (1682–1725) of Russia, and Charles XI of Sweden (1660–1697).

Although a strict Calvinist who stood ready to form alliances against the Catholic states led by France's Louis XIV, he was tolerant of Catholics and Jews. He settled some 20,000 Huguenot refugees from France in his domains, which help held up industry and trade, as did the foreign craftsmen he brought in. Establish local governments in each province, headed by a governor and a chancellor, but they reported to his central government in Berlin. The Great Elector is most famous for building a strong standing army, with an elite officer corps. In 1668 he introduced the Prussian General Staff; it became the model in controlling an army for other European powers. Funding the military through heavy taxes required building up new industry, such as wool, cotton, linen, lace, soap, paper, and iron. He paid attention to infrastructure, especially building the Frederick William Canal through Berlin, linking his capital city to ocean traffic. He was frustrated in building up naval power, lacking ports and sailors. A learned man, he founded a university and established the Berlin library. 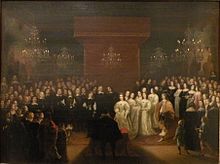 Painting of his 1646 wedding ceremony by Johannes Mytens 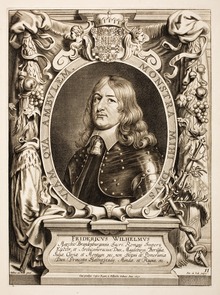 Portrait engraving after a painting by Anselm van Hulle

On 7 December 1646 in The Hague, Frederick William entered into a marriage, proposed by Blumenthal as a partial solution to the Jülich-Berg question, with Luise Henriette of Nassau (1627–1667), daughter of Frederick Henry of Orange-Nassau and Amalia of Solms-Braunfels and his 1st cousin once removed through William the Silent. Their children were as follows: