The visitor center, museum, and headquarters of the Death Valley National Park are located at Furnace Creek.

According to the United States Census Bureau, Furnace Creek has a total area of 31.5 square miles (82 km2), over 99% of it being land.

Springs in the Amargosa Range created a natural oasis at Furnace Creek, which has subsequently dwindled due to diversion of this water to support the village.

Furnace Creek holds the record for the highest recorded temperature in the world, reaching 134 °F (56.7 °C) on July 10, 1913. Some meteorologists dispute the accuracy of the 1913 temperature measurement. According to news reports, the "highest temperature ever reliably recorded on Earth", registered at 130 °F (54.4 °C), was recorded on Sunday 16 August 2020 in Furnace Creek.

In addition, a ground temperature of 201 °F (93.9 °C) was recorded in Furnace Creek on July 15, 1972; this may be the highest natural ground surface temperature ever recorded. (Temperatures measured directly on the ground may exceed air temperatures by 30 to 50 °C.) 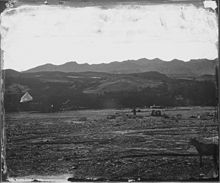 The Timbisha tribe currently live at the Death Valley Indian Community reservation here. They provided many of the artisans and builders to construct the original Fred Harvey Company resort buildings, the Indian Village, and Park Service structures. They compose the majority of residents of Furnace Creek's permanent population at the tribe's reservation. Furnace Creek was formerly the center of Death Valley mining and operations for the Pacific Coast Borax Company and the historic 20 Mule Teams hauling wagon trains of borax across the Mojave Desert.

The village is surrounded by a number of National Park Service public campgrounds. The Ranch at Death Valley is located here, part of the Oasis at Death Valley, one of the park's major tourist facilities. The Furnace Creek Golf Course attached to the ranch claims to be the lowest in the world at 214 feet (65 m) below sea level. Some of the lodging is closed in the summer when temperatures can exceed 125 °F (52 °C), but the golf course remains open; the resort established a summer tournament in 2011 called the Heatstroke Open which drew a field of 48. There are also a restaurant, cafe, store, and gas station in Furnace Creek village. The Furnace Creek Airport is located about 0.75 miles (1.21 km) west of the park headquarters.

Near Furnace Creek is California Historical Landmark number 442, Death Valley '49ers Gateway, assigned on October 24, 1949. The marker is at the corner of California State Route 190 and Badwater Road.

NO. 442 DEATH VALLEY GATEWAY - Through this natural gateway the Death Valley '49ers, more than 100 emigrants from the Middle West seeking a shortcut to gold fields of central California, entered Death Valley in December 1849. All suffered from thirst and starvation. Seeking an escape from the region, two contingents went southwest from here, while the others proceeded northwest.