Eugene Arthur Okerlund (December 19, 1942 – January 2, 2019), better known by his ring name "Mean" Gene Okerlund, was an American professional wrestling interviewer, announcer and television host. He was best known for his work in the World Wrestling Federation and World Championship Wrestling. Okerlund was inducted into the WWE Hall of Fame in 2006 by Hulk Hogan. He was signed to a lifetime contract with WWE and worked for promotional programs, mostly WWE Network programming and, occasionally, the TV series.

After studying broadcast journalism at the University of Nebraska (Lincoln), Okerlund landed a job as a disc jockey at KOIL, a popular radio station in Omaha, Nebraska. Okerlund later moved to Minneapolis where he worked for WDGY as a radio host under the alias of Gene Leader. He later left that position to become Program Director at KDWB. Okerlund also worked in Minneapolis for a local television station in the front office.

Okerlund fronted the band Gene Caroll and the Shades releasing "Is It Ever Gonna Happen" on the album "In This Corner" Norton Records in 1962.

Okerlund left the radio industry for a position at the American Wrestling Association (AWA) in 1970, where he occasionally filled in for ailing ring announcer and interviewer Marty O'Neill, eventually becoming O'Neill's permanent replacement by the end of the decade.

He stayed with the AWA until the end of 1983, when he was one of many AWA personnel to join the expanding World Wrestling Federation (WWF). He stayed with the WWF for nine years as their top interviewer and was host of such WWF shows as All-American Wrestling and Tuesday Night Titans.

In 1984, Okerlund and Hulk Hogan faced Mr. Fuji and George Steele in Minneapolis. He was supposed to stay on the apron and let Hogan fight, but when Hogan gave him a high five, the referee mistook it for a tag. Okerlund had to go in, but before his opponent touched him, he quickly got out of the way and tagged Hogan back in. Okerlund pinned Mr. Fuji for the victory.

Okerlund was also part of one of the most infamous bloopers in professional wrestling history at SummerSlam in 1989. Okerlund was set to interview WWF Intercontinental Heavyweight Champion "Ravishing" Rick Rude and Rude's manager Bobby Heenan prior to Rude's title defense against The Ultimate Warrior when the SummerSlam backdrop fell backwards. The shot of the SummerSlam backdrop falling can be seen in the video induction of Mean Gene at the WWE Hall of Fame in 2006. Okerlund then turned around and said, "F*** it," along with some other words with no audio. The cameras then cut away to a live shot of the crowd, with play-by-play announcer Tony Schiavone and color commentator Jesse Ventura attempting to restore order. After a short while, Okerlund's interview with Rude and Heenan went as planned. According to a shoot interview with Okerlund, conducted by RF Video, the SummerSlam blooper was actually taped beforehand. Okerlund explained that the wrong tape was aired during the live broadcast. Meanwhile, a frantic Vince McMahon was on a headset instructing Ventura to cover for Okerlund. Ventura instead made fun of Okerlund's on-air gaffe and jokingly regarded Okerlund as a "troublemaker."

Okerlund appeared at SummerSlam 1993 and made his final WWF appearance of the 1990s on the September 18, 1993 edition of Superstars. He then left the WWF entirely when his contract expired. He stated in an RF shoot interview, that although he probably could have re-negotiated a new contract, he was never actually offered one, thus opting to become an interviewer for World Championship Wrestling (WCW). He claimed at the time of his hiring with WCW that he had not been on speaking terms with McMahon for the past few years he was working in the WWF.

He debuted on the November 6, 1993 edition of WCW Saturday Night. Three years later, his contract with WCW expired and he was off television for two months in the fall of 1996. His last appearance for a time was at WCW Fall Brawl on September 15, 1996. Okerlund had talks with the WWF during this time, however, they could not come to terms. Mike Tenay took over Special Interviews and the Pay Per View Reports. Okerlund signed a new contract with WCW and returned on the November 11, 1996 edition of WCW Monday Nitro. Okerlund wrestled twice in WCW. The first was in mid-2000 when he and Buff Bagwell faced Chris Kanyon and fellow announcer Mark Madden, with Bagwell and Okerlund winning. However, Madden wanted Okerlund back in the ring the next week in a one on one match-up. The two did wrestle again and Okerlund won the match with the assistance of Pamela Paulshock. After that, he was with WCW until January 2001. 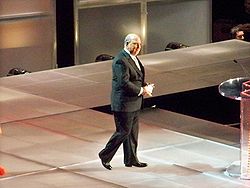 Okerlund at the 2009 WWE Hall of Fame

Shortly before WWF's purchase of WCW in 2001, Okerlund rejoined his old promotion (renamed WWE in 2002). His first assignment back with WWF was the Gimmick Battle Royal during WrestleMania X-Seven on April 1, 2001, along with Bobby "The Brain" Heenan. He hosted WWE Confidential in 2002, which lasted for two years. Okerlund also hosted WWE Madison Square Garden Classics, a weekly series, airing on the MSG Network, featuring classic WWE matches that took place at Madison Square Garden from the last four decades. He's also the host for the WWE Classics On Demand Hall of Fame section, which takes a look at a different WWE Hall of Famer each month.

Okerlund was inducted into the WWE Hall of Fame on April 1, 2006, by Hulk Hogan.

In June 2008, Okerlund began hosting WWE Vintage Collection, a program which showcases archive footage from the extensive WWE video library. Okerlund conducted the interviews on the three-hour "Old School" episode of Raw on November 15, 2010, where he interviewed John Cena, Randy Orton, members of The Nexus and Mae Young in similar fashion as to how interviews were done in the 1980s. Okerlund also appeared in a few Old School merchandising segments, promoting WWE's new Old School merchandise line.

On April 10, 2012, during the WWE Smackdown: Blast from the Past, Okerlund teamed with World Heavyweight Champion Sheamus, in a winning effort, against the team of Daniel Bryan and Alberto Del Rio. On the December 17, 2012 edition of WWE Raw, Okerlund appeared alongside Jim Ross and Ricky The Dragon Steamboat to announce the winner of the Slammy Award for Match of the Year. On March 4, 2013, Okerlund appeared at the second Old School Raw for Mae Young's 90th birthday party which was interrupted later by CM Punk. On January 7, 2014, Okerlund made an appearance at the third Old School Raw, in which he made references to the premium rate "wrestling hotlines" of the 1980s and 1990s.

In November 2016, Okerlund became the narrator for the WWE Network original animated series WWE Story Time. he kept that spot until his death with Jerry Lawler taking over the voiceover work for the show.

On January 22, 2018 at Raw 25 Years, Okerlund made his final WWE appearance where he interviewed AJ Styles.

Okerlund was one of the professional wrestling legends on the WWE Network's show Legends' House.

Okerlund appeared as a "Celebrity Prognosticator" on ESPN Radio's The Dan Le Batard Show with Stugotz on November 27, 2013.

In 2018, Okerlund appeared in a Mountain Dew Kickstart commercial featuring Kevin Hart who during the commercial semi-impersonated Randy Savage.

He made an appearance at the WrestleCade 2018 weekend event that took place November 23–25, 2018 in Winston-Salem, North Carolina.

Forming a band in his high school days, "Gene Carroll & The Shades" were based out of Sisseton, South Dakota, recording a single in 1959 "Red Devil / Do You Remember" (M&L 1001). A second single was released in 1962 "Is It Ever Gonna Happen / Holly" (Wausau C-1100) as "Gene Carroll". They played parties throughout the Midwest and the Dakotas, and in 2009 were inducted into the South Dakota Rock and Roll Music Association's Hall of Fame.

In his AWA days, Okerlund was given the nickname "Mean Gene" by Jesse "The Body" Ventura – an irony, considering that throughout the years many wrestlers and promotion staff considered Okerlund the friendliest person in the game. Okerlund was close friends with Hulk Hogan, The Iron Sheik and the late Bobby Heenan. Okerlund served as best man at the Iron Sheik's wedding.

His name has been associated with fast food concept, Mean Gene's Burgers, the brainchild of food-distributor Orion Food Systems (headed by two of Okerlund's nephews), which appeared on college campuses including Duke University and West Virginia University, as well as Mean Gene's Pizza, a chain of pizzerias located within bowling alleys. Mean Gene's Burgers locations are also located at select overseas US Navy base eatery locations (e.g. United States Fleet Activities Yokosuka). These are owned by Hot Stuff Foods, which was headed by two of his nephews. Early in 2006, Okerlund and Hot Stuff split. Okerlund and one of the nephews were planning to start their own food company on the brands, but Hot Stuff sued, claiming they had "Mean Gene" trademarked. Okerlund lost, with the judge saying that Okerlund can't use the name "Mean Gene" for his new food company. Okerlund succeeded in canceling the trademark registrations held by Orion, but remained enjoined from competing with Orion for the remainder of his life.

Okerlund had been married to his wife Jeanne since March 27, 1964 and had two sons and three grandsons. His son Todd starred on the University of Minnesota ice hockey team from 1983 to 1987. Todd played on the 1988 United States Olympics team that competed in Calgary. He played four games with the NHL's New York Islanders. A chronic knee injury ultimately forced his early retirement.

In his later years, Okerlund suffered from polycystic kidney disease.

Okerlund, who was a heavy drinker for most of his adult life, had received three kidney transplants. His first was in 1995 and his second in 2004, the latter of which he received from his wife.

Okerlund died on the morning of January 2, 2019, at the age of 76 in a Sarasota, Florida hospital. This was later confirmed on WWE social media and its official website later that day. It was revealed by his son, Todd Okerlund, that he had received three kidney transplants and had suffered a fall which caused his health to deteriorate in the weeks leading up to his death. Condolences were sent by fellow WWE superstars and alumni on all social media including: Ric Flair, Hulk Hogan, Iron Sheik, Stone Cold Steve Austin and Dwayne "The Rock" Johnson, among many others.