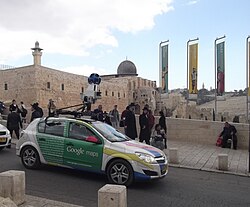 Service in Japan was introduced on August 4, 2008. Japan's coverage was initially concentrated in five areas with a total of 10 camera icons. The service has faced criticisms from bloggers in Japan of cultural insensitivity.

On May 26, 2011, Google announced that, in India, capturing of Street View images in Bangalore, the capital of the state of Karnataka, had started. However, Google Street View was banned from Bangalore on June 20, 2011.

On September 2, 2011, Google has revealed that its Street View feature will be introduced to the country in association with the Tourism Authority of Thailand.

On September 3, 2011, Google started to collaborate with Tourism Malaysia to record Malaysian locations to be featured on its Google Map Street View.

For security reasons, the Government of India prohibits Street View photography from roadways. Railways, however, are excluded in this prohibition, and both the Kalka-Shimla Railway and Nilgiri Mountain Railway have Street View coverage of their entire track length using cameras mounted on flatcars. Additionally, private persons have uploaded numerous panoramic photos of tourist and other sites of note to Google Maps.

As in other places, there has been controversy surrounding plans to bring Street View to various Asian countries.

In Israel, there have been concerns that introducing the service could increase the risk of terrorism to which the region is prone.

In India, the Government rejected Google Street View. Official sources said the rejection came after a detailed analysis by security agencies and defense forces which feel that allowing Google to cover India would compromise country’s security interest. Security establishments became wary of allowing such image capturing given that planning for the 2008 terrorist attacks in Mumbai is believed to have involved photographic reconnaissance of targets by Pakistani American David Coleman Headley. The Indian Government had plans to talk about Google street view in India, but in March 2018 Government of India finally rejected the Google Street view plan citing that this will compromise the country's security as India is constantly targeted by terrorist groups from Pakistan, especially in the Kashmir valley.

Police in South Korea raided Google offices in that country in order to determine if Street View was legal.

In 2013, people in Tambon Sa-iap village, Song District in Phrae Province, Thailand, mistakenly believed that the Street View car was surveying the village for the unwanted Kaeng Suea Ten Dam project and blocked it, not allowing it to take photographs. They also arrested the driver and interrogated him to determine if he was working for the dam project. He was released after swearing on the Buddha that his work was not related to the dam project. After confirming his story, the village's leaders apologized for the misunderstanding.

Retrieved from "https://en.wikipedia.org/w/index.php?title=Google_Street_View_in_Asia&oldid=1008602916#.C2.A0Jordan"
Uses material from the Wikipedia article Google Street View in Asia, released under the CC BY-SA 3.0 license.