The governor has a duty to enforce local laws, to convene the Legislative Assembly, the power to either approve or veto bills passed by the Legislative Assembly, to appoint government officers, to appoint justices, and to grant pardons. Since 1948, the governor has been elected by the people of Puerto Rico. Prior to that, the governor was appointed either by the king of Spain (1510–1898) or the president of the United States (1898–1948).

Article IV of the Constitution of Puerto Rico vests the executive power on the governor and empowers them with the faculty to appoint officers. Law No. 104 of 1956 empowers them with the faculty to delegate functions. These two faculties in conjunction allow the governor to delegate most of their functions while continuing to be the maximum officer and head of government.

The first known and recorded heads of government in the history of Puerto Rico were the caciques, the tribal chiefs of the natives known as Taínos that inhabited the island before the arrival of Spaniards. It is believed that the cacique rank was apparently established through democratic means. His importance in the tribe was determined by the size of his tribe rather than his warlord skills, since the Taínos were mostly a pacifist culture. Agüeybaná I is the most-well known cacique as he was the one governing all others when the Spaniards arrived in 1493 although many others existed during his period, as well as before and after him.

The first native Puerto Rican to perform the function was Juan Ponce de León II, grandson of the conquistador, who served as interim governor in 1579.

After 1580 Puerto Rico's government was established as the Captaincy General of Puerto Rico, and subsequent governors held the office of Captain General as well.

As a United States unincorporated territory and commonwealth

In 1900, William McKinley signed the Foraker Act as a United States federal law, which established civilian (limited popular) government on Puerto Rico. The new government had a governor and an executive council appointed by the President, a House of Representatives with 35 elected members, a judicial system with a Supreme Court, and a non-voting Resident Commissioner in Congress. The first civilian governor of the island under the Foraker Act was Charles Herbert Allen. This system was still used after the approval of the Jones–Shafroth Act, which altered the structure of government in Puerto Rico, and was in use until 1948.

Following the approval of the federal Elective Governor Act by President Harry S Truman in 1947, the governor has been elected through a democratic process every four years since 1948. At that time, Luis Muñoz Marín became the first democratically elected governor.

The governor must address the legislature at the beginning of each year to present two speeches, one is the State of the Commonwealth speech and another in which the governor presents the "Recommended Budget" for the next fiscal year, in which the governor proposes to the state legislature a budget for the consideration of said body. They are also the commander-in-chief of the Puerto Rico National Guard and the chief diplomat. 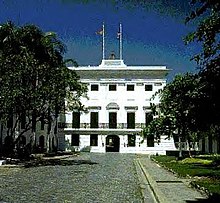 The governor serves a four-year term which begins on the second day of January after the year of their election and ends on the date their successor takes office. Consecutive service is unlimited, according to the Constitution of the Island. Luis Muñoz Marín, its first elected governor, served for four consecutive terms from 1949 to 1965, but almost all subsequent governors served either one or two terms; the Constitution of the Commonwealth was ratified by the people of Puerto Rico in 1952. Rafael Hernández Colón, however, served three non-consecutive terms: first from 1973 to 1977, and then from 1985 to 1993.

The governor is elected by a direct vote from the people. Candidates typically represent a political party, with every elected governor to date (as of 2019[update]) having been a member of the New Progressive Party of Puerto Rico or the Popular Democratic Party of Puerto Rico. Only a plurality vote (more than any other candidate) is required to win election, rather than a majority (more than half the votes).

The Puerto Rico Elections Code states that if the margin of victory of a candidate is less than 0.5% of the votes, a full recount of the election must take place. So far, only in the gubernatorial elections of 1980 and 2004 has a recount taken place.

On July 24, 2019, Governor Ricardo Rosselló announced his resignation after two weeks of protests in Puerto Rico related to Telegramgate. He became the first elected governor to resign the post. His resignation took effect on August 2, 2019 at 5 pm. Before leaving office, Rosselló nominated Pedro Pierluisi as secretary of state, intending to make Pierluisi his successor, but his nomination was not approved by the full legislature before Rosselló's resignation took effect. Despite not having been confirmed by the Senate of Puerto Rico, Pierluisi was sworn in as governor, which prompted a legal challenge. Less than a week later, the Supreme Court of Puerto Rico declared that Pierluisi had taken office on unconstitutional grounds and removed him from office, effective 5 p.m. AST on August 7. At that time, the current secretary of justice, Wanda Vázquez Garced, became governor following the original line of succession as it was on August 2 at 5 pm.

Retrieved from "https://en.wikipedia.org/w/index.php?title=Governor_of_Puerto_Rico&oldid=998345184"
Uses material from the Wikipedia article Governor of Puerto Rico, released under the CC BY-SA 3.0 license.