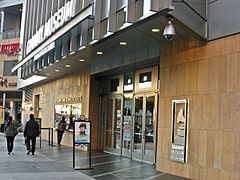 The entrance of the Grammy Museum at L.A. Live during the John Lennon, Songwriter exhibit

The GRAMMY Museum is an interactive, educational museum devoted to the history and winners of the Grammy Awards. The Museum has interactive touch-screens, videos, recording booths, and a collection of historical music artifacts including costumes and instruments from the Grammy Awards, hand-written lyrics, records, and audio/video recordings.

Since its opening, the GRAMMY Museum has presented over 300 public programs including educational programs for young students.

The GRAMMY Museum explores the creative process; the art and technology of the recording process; and the history of the GRAMMY Awards.

The GRAMMY Museum features exhibits including: behind-the-scenes live performances, seminars, classes, musician meet-and-greets, and interactive recording booths. The museum starts on the fourth floor and continues down to the third and second floor. The exhibit, Crossroads, on the fourth floor, features touch-screens to view photos and listen to music of all genres. Another interactive exhibit allows the user to go inside six different sound-proof recording booths as famous performers and producers teach about different stages of producing commercial soundtracks. Visitors can record their own singing and rapping track, and remix it to produce a cover of various pop songs. The museum also has outfits worn by Grammy-Award-winning musicians such as Kanye West, Jennifer Lopez, and Rihanna.

The GRAMMY Museum regularly updates and displays special exhibits. Some current and past exhibits include:

The GRAMMY Museum is located in Los Angeles downtown's L.A. Live campus at the corner of Figueroa Street and Olympic Boulevard. The museum has an Olympic Boulevard address, but the main entrance is on Figueroa Street. Bronze disks for each year's GRAMMY Awards – honoring the top winners, Record of the Year, Best New Artist, Album of the Year, and Song of the Year – are embedded in the sidewalks on the streets of LA Live.

Retrieved from "https://en.wikipedia.org/w/index.php?title=Grammy_Museum_at_L.A._Live&oldid=1002972272"
Uses material from the Wikipedia article Grammy Museum at L.A. Live, released under the CC BY-SA 3.0 license.