The Grand Opera House is a theatre in Belfast, Northern Ireland, designed by the most prolific theatre architect of the period, Frank Matcham. It opened on 23 December 1895.

According to the Theatres Trust, the "magnificent auditorium is probably the best surviving example in the United Kingdom of the oriental style applied to theatre architecture".

It was renamed the Palace of Varieties in 1904, although it reverted to its original name in 1909. Variety programmes dominated in the 1920s and 1930s and the theatre saw performances by Gracie Fields, Will Fyffe and Harry Lauder. It became a repertory theatre during World War II and at the celebrations to mark the end of the war, Eisenhower, Montgomery and Alanbrooke attended gala performances at the theatre. The Grand Opera House was acquired by the Rank Organisation, which led to its use as a cinema between 1961 and 1972. 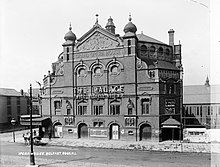 As business slowed in the early 1970s with the onset of the Troubles, Rank initiated plans to sell the theatre to a property developer, who proposed that the building be pulled down and replaced with an office block. However, following the action of Kenneth Jamison (director of the Arts Council of Northern Ireland) and Charles Brett (founder member of the Ulster Architectural Heritage Society and ACNI board member), the building was bought by the Arts Council of Northern Ireland and listed in 1974. The Permanent Secretary of the Department of Education, Arthur Brooke, lent his support to the project and his department provided the funding for extensive renovatation of the theatre. The Grand Opera House reopened in 1980.

The building has been damaged by bombs on several occasions, usually when the nearby Europa Hotel had been targeted. It was badly damaged by bomb blasts in 1991 and 1993. The theatre continued, however, to host musicals, plays, pantomimes and live music.

In 1995 the running of the theatre was taken over by the Grand Opera House Trust. An renovation was undertaken in 2006 with the addition of the Baby Grand performance space together with extended foyers, extended stage wings and artist accommodation and access for customers with disabilities. A restaurant called "The Hippodrome" was added on the third floor, while on the ground floor a daytime bistro named "Luciano's" opened, as well as space for corporate meetings and functions. "Luciano's" closed after several years of poor trading.

The building hosts smaller musical, dramatic and comedy performances as well as educational events. The theatre reopened with a Gala event on 21 October 2006. The capacity is 1,063.