Hardin County is a county located in the U.S. state of Iowa. As of the 2010 census, the population was 17,534. The county seat is Eldora. The county was named in honor of Col. John J. Hardin, of Illinois, who was killed in the Mexican–American War.

Hardin County was formed in 1851. It was named after Colonel John J. Hardin, who died in the Mexican–American War.

In its history the county has had three courthouses. The first was a small wood framed building, which burned down in the 1850s. The second courthouse was a two-story building and stood on the site of the current office of the county sheriff. The third and present courthouse was constructed in 1892 and opened on September 19, 1893. The structure was listed on the National Register of Historic Places in 1981.

Hardin County, along with Story County, was also a primary filming location for the 1996 movie Twister, starring Bill Paxton and Helen Hunt. 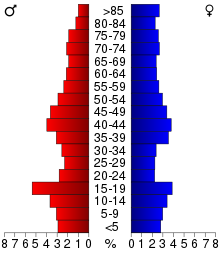 The population ranking of the following table is based on the 2010 census of Hardin County.

For most of its history, Hardin County has primarily supported the Republican Party in presidential elections, with only five of the party's candidates failing to win the county in the period from 1896 to 1984. The only Democrat since 1996 to win the county has been Barack Obama in 2008, winning by only 78 votes.