Hollywood Boulevard is a major east–west street in Los Angeles, California. It begins in the west as a winding residential street at Sunset Plaza Drive in the Hollywood Hills West district. After crossing Laurel Canyon Boulevard, it proceeds due east as a major thoroughfare through Hollywood, Little Armenia and Thai Town to Vermont Avenue. It then runs southeast to its eastern terminus at Sunset Boulevard in the Los Feliz district. Parts of the boulevard are popular tourist destinations, primarily the fifteen blocks between La Brea Avenue east to Gower Street where the Hollywood Walk of Fame is primarily located.

In the 1920's the Boulevard and adjacent streets became a major regional shopping district, both for everyday needs and appliances, but increasingly also for high-end clothing and accessories, in part because of the nearby film studios. Chains that opened includes Schwab's in 1921, Mullen & Bluett in 1922, I. Magnin in 1923, Myer Siegel in 1925, F. W. Grand and Newberry's (dime stores) in 1926-8, and Roos Brothers in 1929. The independent Robertson's department store, at 46,000 square feet (4,300 m2) and 4 stories tall, opened in 1923. In 1922, stock was sold to finance construction of a much larger department store at Hollywood and Vine, originally to have been a Boadway Bros.. When Boadway's went out of business the next year, B. H. Dyas, a Downtown Los Angeles-based department store, opened in the 130,000-square-foot (12,000 m2) building in March 1928, then sold their lease to The Broadway in 1931 – the building still a landmark today, known as the Broadway Hollywood Building. By 1930 the shopping district consisted of over 300 stores. The area would later face competition from areas along Wilshire Boulevard: the easternmost around Bullocks Wilshire which opened in 1929, second the Miracle Mile, and finally, the shopping district of Beverly Hills, where Saks Fifth Avenue opened a store in 1938.

In 1958, the Hollywood Walk of Fame, which runs from La Brea Avenue east to Gower Street (and an additional three blocks on Vine Street), was created as a tribute to artists working in the entertainment industry.

In the 1970's, the street became very seedy and was frequented by many odd characters as shown in pictures by photographer Ave Pildas.

In 1985, a portion of Hollywood Boulevard in Hollywood was listed in the National Register of Historic Places as part of the "Hollywood Boulevard Commercial and Entertainment District". In 1992, the street was paved with glittery asphalt between Vine Street and La Brea Boulevard.

The El Capitan Theatre was refurbished in 1991 then damaged in the 1994 Northridge earthquake. The full El Capitan building was fully restored and upgraded in December 1997. The Hollywood Entertainment District, a self-taxing business improvement district, was formed for the properties from La Brea to McCadden on the boulevard.

An anti-cruising ordinance prohibits driving on parts of the boulevard more than twice in four hours.

Beginning in 1995, then Los Angeles City Council member Jackie Goldberg initiated efforts to clean up Hollywood Boulevard and reverse its decades-long slide into disrepute. Central to these efforts was the construction of the Hollywood and Highland Center and adjacent Dolby Theatre (originally known as the Kodak Theater) in 2001.

In early 2006, the city made revamping plans on Hollywood Boulevard for future tourists. The three-part plan was to exchange the original streetlights with red stars into two-headed old-fashioned streetlights, put in new palm trees, and put in new stoplights. The renovations were completed in late 2006.

In the few years leading up to 2007, more than $2 billion was spent on projects in the neighborhood, including mixed-use retail and apartment complexes and new schools and museums.

Advocates promote the idea of closing Hollywood Boulevard to traffic and create a Pedestrian zone from La Brea Avenue to Highland Avenue citing an increase in pedestrian traffic including tourism, weekly movie premiers and award shows closures, including 10 days for the Academy Award ceremony at the Dolby Theater. Similar to other cities in the US, like Third Street Promenade, Fremont Street in Las Vegas, Market St. in San Francisco or the closure in Times Squares Pedestrian Plaza's created in 2015.

In June 2019, The City of Los Angeles commissioned Gensler architects to provide a master plan for a $4 million dollar renovation to improve and "update the streetscape concept" for the Walk of Fame. Los Angeles City Councilmember Mitch O’Farrell released the draft master plan designed by Gensler and Studio-MLA in January 2020. It proposed widening the sidewalks, adding bike lanes, new landscaping, sidewalk dining, removing lanes of car traffic and street parking between the Pantages Theater (Argyle Avenue) at the east and The Emerson Theatre (La Brea Avenue) at the west end of the boulevard.

A popular event that takes place on the Boulevard is the complete transformation of the street to a Christmas theme. Shops and department stores attract customers by lighting their stores and the entire street with decorated Christmas trees and Christmas lights. The street essentially becomes "Santa Claus Lane." 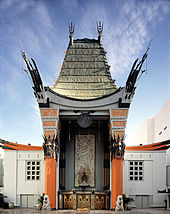