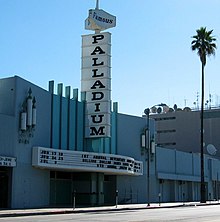 Bandleader Opie Cates was on the bill in 1947.

The Hollywood Palladium is a theater located at 6215 Sunset Boulevard in Hollywood, California. It was built in a Streamline Moderne, Art Deco style and includes an 11,200-square-foot (1,040 m2) dance floor including a mezzanine and a floor level with room for up to 3,800 people. The theater was listed on the National Register of Historic Places in 2016.

Los Angeles Times publisher Norman Chandler funded the construction of the art deco Hollywood Palladium at a cost of $1.6 million in 1940. It was built where the original Paramount lot once stood by film producer Maurice Cohen and is located between Argyle and El Centro avenues. The dance hall was designed by Gordon Kaufmann, architect of the Greystone Mansion, the Los Angeles Times Building and the Santa Anita Racetrack in Arcadia. He was also the architect for the Hoover Dam and early Caltech dorms.

The ballroom opened on October 31, 1940 with a dance featuring Tommy Dorsey and his Orchestra and band vocalist Frank Sinatra. It had six bars serving liquor and two more serving soft drinks and a $1 cover charge and a $3 charge for dinner.

President John F. Kennedy attended a dinner given in his honor by the California Democratic Party at the Palladium on November 18, 1961.

In 1964, it was announced that none of the jazz bands scheduled were to be paid and a riot ensued after the show was cancelled.

Pop Expo '69, referred to as a "teenage fair," was a youth-oriented event held from 28 March to 6 April 1969 at the Palladium, and included performances by The Jimi Hendrix Experience and the MC5.

In 1973, Stevie Wonder performed with Taj Mahal in what was advertised as an "Afrocentric concert" to benefit African refugees.

Beginning in the 1980s and 90s, punk rock, rap and heavy metal concerts started to be booked at the venue. Several white power disturbances resulted, eventually leading to the Palladium closing for eight weeks, starting in February 1993.

Since 1985, the theater has been owned by Palladium Investors Ltd., a privately held group. Curfews were implemented in 1993 and a show by Marky Mark and the Funky Bunch was called off because of a brawl that occurred a few nights earlier. It was also used for Hollywood celebrity parties.

In 2007, the owners agreed to a long-term lease to operate, manage and exclusively book the Hollywood Palladium with Live Nation, a Los Angeles-based company.

The Palladium reopened with a Jay-Z concert on October 15, 2008 after a year-long, multimillion-dollar renovation by Live Nation. The renovation included an overhaul of the venue's interior and exterior, a new dance floor, expanded concessions, upgraded restrooms and improvements to the stage infrastructure. Jay-Z performed for nearly an hour-and-half, backed by an eight-piece band and DJ AM, who played his first show after surviving a plane crash in South Carolina. The Hollywood Palladium was also used as the memorial service site for DJ AM on September 3, 2009.

The Los Angeles City council approved an expansion of the Palladium property parking lot in March 2016. The plan consists of two 28-story residential towers that surrounds the historic music venue. Each tower will stand 350 feet (110 m) tall and create 731 condominiums, 24,000-square-foot (2,200 m2) store front retail space and a below grade-parking garage. The Towers were designed by Stanley Saitowits of Natoma Architects for developer Crescent Heights. The "L" shaped design resembles and echoes the Streamline Moderne - art deco design of the Palladium.

The local AIDS Healthcare Foundation (AHF) filed a lawsuit in 2016 citing over development and improper approval process. One of many local lawsuits filed by AHF president Michael Weinstein. In August 2018, the district court ruled all steps were taken during EIR/DEIR. The AHF filed an appeal. The AHF lost the appeal in November 2019 and Crescent Heights plans to proceed.

The Hollywood Palladium has been featured in many movies and TV shows over the years: