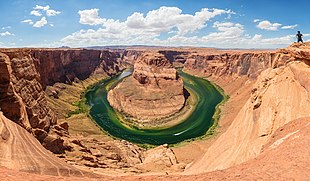 Horseshoe Bend is a horseshoe-shaped incised meander of the Colorado River located near the town of Page, Arizona, United States. It is also referred to as the "east rim of the Grand Canyon."

It is accessible via hiking a 1.5-mile (2.4 km) round trip from a parking area just off U.S. Route 89 within southwestern Page. The land south of the Bend's parking area, trail, and overlook are on the Navajo Nation territory.

Horseshoe Bend is popular just before sunset, as large groups of tourists make the long 1/2 mile hike down to the over look point. (2019)

Horseshoe Bend can be viewed from the steep cliff above.

Recently, the lookout has become a major tourist destination. By 2018, references to the location on social media had caused the number of visitors to increase significantly.

The cause of this uplift is still a matter of research. One hypothesis is that uplift was a result of delamination, where the lowest layer of the North American tectonic plate below the Colorado Plateau detached and sank into the underlying mantle. This would have allowed hotter rock from the asthenosphere, the part of the earth's mantle that underlies its tectonic plates, to rise and lift the overlying crust. Another possibility is that the uplift was the result of heating at the base of the crust. This transformed the lowest crustal rock from eclogite, a relatively dense rock (3.6 g/cm3) to garnet granulite, which is significantly less dense (2.9 g/cm3). This would have produced the buoyant forces needed to uplift the region.

Whatever the cause of the uplift, it resulted in the erosion of up to a mile of overlying sediments from the eastern Grand Canyon. This exposed the Navajo Sandstone, the surface rock found throughout the Horseshoe Bend area, which also forms the entire depth of the canyon walls of the Grand Canyon at Horseshoe Bend. This sandstone is notable for its crossbedding and iron concretions.

The Rincon on Lake Powell in southern Utah. It is an incised cutoff (abandoned) meander.

It is likely that the Colorado River will eventually cut through the neck of the bend, producing a natural bridge like those found at Natural Bridges National Monument in Utah. The river will then abandon Horseshoe Bend, leaving a cutoff meander resembling The Rincon further north along the Colorado River in Utah.