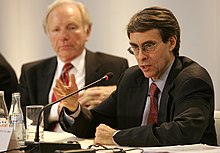 Human Rights Watch in 1997 shared in the Nobel Peace Prize as a founding member of the International Campaign to Ban Landmines and it played a leading role in the 2008 treaty banning cluster munitions.

Human Rights Watch was co-founded by Robert L. Bernstein and Aryeh Neier as a private American NGO in 1978, under the name Helsinki Watch, to monitor the then-Soviet Union's compliance with the Helsinki Accords. Helsinki Watch adopted a practice of publicly "naming and shaming" abusive governments through media coverage and through direct exchanges with policymakers. By shining the international spotlight on human rights violations in the Soviet Union and its European partners, Helsinki Watch says it contributed to the democratic transformations of the region in the late 1980s.

Pursuant to the Universal Declaration of Human Rights (UDHR), Human Rights Watch (HRW) opposes violations of what are considered basic human rights under the UDHR. This includes capital punishment and discrimination on the basis of sexual orientation. HRW advocates freedoms in connection with fundamental human rights, such as freedom of religion and freedom of the press. HRW seeks to achieve change by publicly pressuring governments and their policymakers to curb human rights abuses, and by convincing more powerful governments to use their influence on governments that violate human rights.

Human Rights Watch publishes research reports on violations of international human rights norms as set out by the Universal Declaration of Human Rights and what it perceives to be other internationally accepted, human-rights norms. These reports are used as the basis for drawing international attention to abuses and pressuring governments and international organizations to reform. Researchers conduct fact-finding missions to investigate suspect situations also using diplomacy, staying in touch with victims, making files about public and individuals, and providing required security for them in critical situations and in a proper time generate coverage in local and international media. Issues raised by Human Rights Watch in its reports include social and gender discrimination, torture, military use of children, political corruption, abuses in criminal justice systems, and the legalization of abortion. HRW has documented and reported various violations of the laws of war and international humanitarian law.

Human Rights Watch also supports writers worldwide, who are being persecuted for their work and are in need of financial assistance. The Hellman/Hammett grants are financed by the estate of the playwright Lillian Hellman in funds set up in her name and that of her long-time companion, the novelist Dashiell Hammett. In addition to providing financial assistance, the Hellman/Hammett grants help raise international awareness of activists who are being silenced for speaking out in defence of human rights.

Each year, Human Rights Watch presents the Human Rights Defenders Award to activists around the world who demonstrate leadership and courage in defending human rights. The award winners work closely with HRW in investigating and exposing human rights abuses.

Human Rights Watch was one of six international NGOs that founded the Coalition to Stop the Use of Child Soldiers in 1998. It is also the co-chair of the International Campaign to Ban Landmines, a global coalition of civil society groups that successfully lobbied to introduce the Ottawa Treaty, a treaty that prohibits the use of anti-personnel landmines.

Human Rights Watch is a founding member of the International Freedom of Expression Exchange, a global network of non-governmental organizations that monitor censorship worldwide. It also co-founded the Cluster Munition Coalition, which brought about an international convention banning the weapons. HRW employs more than 275 staff—country experts, lawyers, journalists, and academics – and operates in more than 90 countries around the world. Headquartered in New York City, it has offices in Amsterdam, Beirut, Berlin, Brussels, Chicago, Geneva, Johannesburg, London, Los Angeles, Moscow, Nairobi, Seoul, Paris, San Francisco, Sydney, Tokyo, Toronto, Washington, D.C., and Zürich. HRW maintains direct access to the majority of countries it reports on. Cuba, North Korea, Sudan, Iran, Israel, Egypt, the United Arab Emirates, Uzbekistan and Venezuela are among the handful of countries that have blocked access for HRW staff members.

The current executive director of HRW is Kenneth Roth, who has held the position since 1993. Roth conducted investigations on abuses in Poland after martial law was declared 1981. He later focused on Haiti, which had just emerged from the Duvalier dictatorship but continued to be plagued with problems. Roth's awareness of the importance of human rights began with stories his father had told about escaping Nazi Germany in 1938. Roth graduated from Yale Law School and Brown University.

Human Rights Watch and Amnesty International are the only two Western-oriented international human rights organizations operating in most situations of severe oppression or abuse worldwide. The major differences lie in the group's structure and methods for promoting change.

Amnesty International is a mass-membership organization. Mobilization of those members is the organization's central advocacy tool. Human Rights Watch's main products are its crisis-directed research and lengthy reports, whereas Amnesty International lobbies and writes detailed reports, but also focuses on mass letter-writing campaigns, adopting individuals as "prisoners of conscience" and lobbying for their release. Human Rights Watch will openly lobby for specific actions for other governments to take against human rights offenders, including naming specific individuals for arrest, or for sanctions to be levied against certain countries, recently calling for punitive sanctions against the top leaders in Sudan who have overseen a killing campaign in Darfur. The group has also called for human rights activists who have been detained in Sudan to be released.

Its documentations of human rights abuses often include extensive analyses of the political and historical backgrounds of the conflicts concerned, some of which have been published in academic journals. AI's reports, on the other hand, tend to contain lesser analyses, and instead focus on specific abuses of rights.

In 2010, The Times of London wrote that HRW has "all but eclipsed" Amnesty International. According to The Times, instead of being supported by a mass membership, as AI is, HRW depends on wealthy donors who like to see the organization's reports make headlines. For this reason, according to The Times, HRW tends to "concentrate too much on places that the media already cares about", especially in disproportionate coverage of Israel.

For the financial year ending June 2008, HRW reported receiving approximately US$44 million in public donations. In 2009, Human Rights Watch stated that they receive almost 75% of their financial support from North America, 25% from Western Europe and less than 1% from the rest of the world.

According to a 2008 financial assessment, HRW reports that it does not accept any direct or indirect funding from governments and is financed through contributions from private individuals and foundations.

Financier and philanthropist George Soros of the Open Society Foundation announced in 2010 his intention to grant US$100 million to HRW over a period of ten years to help it expand its efforts internationally: "to be more effective," he said, "I think the organization has to be seen as more international, less an American organization." He said, "Human Rights Watch is one of the most effective organizations I support. Human rights underpin our greatest aspirations: they're at the heart of open societies." The donation increases Human Rights Watch's operating staff of 300 by 120 people. The donation was the largest in the organization's history.

Charity Navigator gave Human Rights Watch a three-star rating overall for 2018. Its financial rating increased from three stars in 2015 to the maximum four as of June 2016. The Better Business Bureau said Human Rights Watch meets its standards for charity accountability.

Kenneth Roth and the Prime Minister of the Netherlands, Mark Rutte, 2 February 2012

Human Rights Watch publishes reports on many different topics and compiles an annual World Report presenting an overview of the worldwide state of human rights. It has been published by Seven Stories Press since 2006; the current edition, World Report 2020, was released in January 2020, and covers events of 2019. World Report 2020, HRW's 30th annual review of human rights practices around the globe, includes reviews of human rights practices and trends in nearly 100 countries, and an introductory essay by HRW Executive Director Kenneth Roth "China’s Global Threat to Human Rights". Human Rights Watch has reported extensively on subjects such as the Rwandan genocide of 1994, Democratic Republic of the Congo and US sex offender registries due to their over-breadth and application to juveniles.

In the summer of 2004, the Rare Book and Manuscript Library at Columbia University in New York became the depository institution for the Human Rights Watch Archive, an active collection that documents decades of human rights investigations around the world. The archive was transferred from its previous location at the Norlin Library at the University of Colorado, Boulder. The archive includes administrative files, public relations documents, as well as case and country files. With some exceptions for security considerations, the Columbia University community and the public have access to field notes, taped and transcribed interviews with alleged victims of human rights violations, video and audiotapes, and other materials documenting the organization's activities since its founding in 1978 as Helsinki Watch. However, significant parts of the HRW archive are not open to researchers or to the public, including the records of the meetings of the board of directors, the executive committee, and the various subcommittees, limiting historians' ability to understand the organization's internal decision-making.

HRW has been criticized for perceived bias by the national governments it has investigated for human rights abuses, by NGO Monitor, and by HRW's founder, and former Chairman, Robert L. Bernstein. Bias allegations have included undue influence by United States government policy, claims that HRW is biased against Israel (and focuses undue attention on the Arab–Israeli conflict). HRW has also been criticized for poor research methodology and lax fact-checking, and ignoring the human-rights abuses of less-open regimes. HRW has routinely publicly addressed, and often denies, criticism of its reporting and findings.

According to Democracy Now, HRW has also been criticized for having a 'revolving door' with the U.S. government, a charge which HRW disputes.

In 2020, the HRW Board of Directors discovered that Human Rights Watch accepted a $470,000 donation from Saudi real estate magnate Mohamed Bin Issa Al Jaber, owner of a company HRW "had previously identified as complicit in labor rights abuse", under the condition that the donation not be used to support LGBT advocacy in the Middle East and North Africa. The gift was returned and Human Rights Watch issued a statement saying that accepting the funding was a “deeply regrettable decision” in response to investigative reporting from The Intercept regarding the donation.

In August 2020, HRW executive director Kenneth Roth was sanctioned – together with the heads of four other U.S.-based democracy and human rights organizations and six U.S. Republican lawmakers – by the Chinese government for supporting the Hong Kong pro-democracy movement in the 2019–20 Hong Kong protests. The leaders of the five organizations saw the sanctioning, whose details were unspecified, as a tit-for-tat measure in response to the earlier sanctioning by the U.S. of 11 Hong Kong officials. The latter step had in turn been a reaction to the enactment of the Hong Kong National Security Law at the end of June.