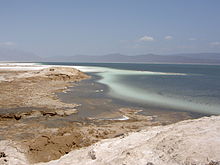 Lake Assal, one of the most saline lakes outside of Antarctica

A hypersaline lake is a landlocked body of water that contains significant concentrations of sodium chloride or other salts, with saline levels surpassing that of ocean water (3.5%, i.e. 35 grams per litre or 0.29 pounds per US gallon).

Specific microbial species thrive in these high-salinity environments[dubious ] that are inhospitable to most lifeforms. Some of these species enter a dormant state when desiccated, and some species are thought to survive for over 250 million years.

The water of hypersaline lakes has great buoyancy due to its high salt content.

Hypersaline lakes are found on every continent, especially in arid or semi-arid regions.

In the Arctic, the Canadian Devon Ice Cap contains two subglacial lakes that are hypersaline. In Antarctica, there are larger hypersaline water bodies, lakes in the McMurdo Dry Valleys such as Lake Vanda with salinity of over 35% (i.e. 10 times as salty as ocean water).

The most saline water body in the world is the Gaet'ale Pond, located in the Danakil Depression in Afar, Ethiopia. The water of Gaet'ale Pond has a salinity of 43%, making it the saltiest water body on Earth; (i.e. 12 times as salty as ocean water). Previously, it was considered that the most saline lake outside of Antarctica were Lake Assal, in Djibouti, which has a salinity of 34.8% (i.e. 10 times as salty as ocean water). Probably the best-known hypersaline lakes are the Dead Sea (34.2% salinity in 2010) and the Great Salt Lake in the state of Utah, USA (5–27% variable salinity). The Dead Sea, dividing Israel and the Palestinian West Bank from Jordan, is the world's deepest hypersaline lake, and the Araruama Lagoon in Brazil is the world's largest. The Great Salt Lake, located in Utah, while having nearly three times the surface area of the Dead Sea, is shallower and experiences much greater fluctuations in salinity. At its lowest recorded water levels, it approaches 7.7 times the salinity of ocean water, but when its levels are high, its salinity drops to only slightly higher than that of the ocean.