Rev Dr John Watson DD (3 November 1850 – 6 May 1907), was a minister of the Free Church of Scotland. He is remembered as an author of fiction, known by his pen name Ian Maclaren.

The son of John Watson, a civil servant, he was born in Manningtree, Essex, and educated at Stirling. His paternal uncle Rev Hiram Watson (1813-1891) was a minister of the Free Church of Scotland and John appears to have chosen to follow in his shoes.

He studied at Edinburgh University, then trained as a Free Church minister at New College in Edinburgh, also undertaking some postgraduate study at Tübingen.

In 1874 he was licensed by the Free Church of Scotland and became assistant minister of Edinburgh Barclay Church. In 1875 he was ordained as minister at Logiealmond in Perthshire. In 1877 he was transferred to St Matthews Free Church in Glasgow. In Glasgow he lived at 44 Windsor Terrace. In 1880 he became minister of Sefton Park Presbyterian Church in Liverpool, from which he retired in 1905. During this period he was a main mover in the founding of the Westminster College in Cambridge.

In 1896 he was Lyman Beecher lecturer at Yale University, and in 1900 he was moderator of the synod of the English Presbyterian Church. While travelling in the United States he died from blood poisoning, following a bout with tonsilitis, at Mount Pleasant, Iowa. His body was returned to England, and buried in Smithdown Cemetery in Liverpool.

Maclaren's first stories of rural Scottish life, Beside the Bonnie Brier Bush (1894), achieved extraordinary popularity, selling more than 700,000 copies, and was succeeded by other successful books, The Days of Auld Lang Syne (1895), Kate Carnegie and those Ministers (1896), and Afterwards and other Stories (1898). By his own name Watson published several volumes of sermons, among them being The Upper Room (1895), The Mind of the Master (1896) and The Potter's Wheel (1897). Today he is regarded as one of the principal writers of the Kailyard school.

The highly impressive St Matthews Free Church became the Highland Memorial Church in 1941 and was destroyed by fire in 1952. 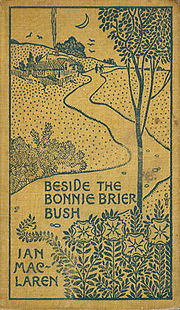 Cover of Beside the Bonnie Briar Bush (1894)

Books of sermons as John Watson