Ibn Jubayr (1 September 1145 –29 November 1217; Arabic: ابن جبير‎), also written Ibn Jubair, Ibn Jobair, and Ibn Djubayr, was an Arab geographer, traveller and poet from al-Andalus. His travel chronicle describes the pilgrimage he made to Mecca from 1183 to 1185, in the years preceding the Third Crusade. His chronicle describes Saladin's domains in Egypt and the Levant which he passed through on his way to Mecca. Further, on his return journey, he passed through Christian Sicily, which had been recaptured from the Muslims only a century before, and he made several observations on the hybrid polyglot culture that flourished there.

Ibn Jubayr was born in 1145 AD in Valencia, Spain, to an Arab family of the Kinanah tribe. He was a descendant of 'Abdal-Salam ibn Jabayr, who, in 740 AD, had accompanied an army sent by the Caliph of Damascus to put down a Berber uprising in his Spanish provinces. Ibn Jubayr studied in the town of Xàtiva, where his father worked as a civil servant. He later became secretary to the Almohad governor of Granada.

In the introduction to his Rihla, Ibn Jubayr explains the reason for his travels. As secretary for the ruler of Granada in 1182, he was threatened into drinking seven cups of wine. Seized by remorse, the ruler then filled seven cups of gold dinara, which he gave him. To expiate his godless act, although it had been forced upon him, Ibn Jubayr decided to perform the duty of Hajj to Mecca. He left Granada on 3 February 1183 accompanied by a physician from the city.

Sea journey from Ceuta to Alexandria

Ibn Jubayr left Granada and crossed over the Strait of Gibraltar to Ceuta, then under Muslim rule. He boarded a Genoese ship on February 24, 1183 and set sail for Alexandria. His sea journey took him past the Balearic Islands and then across to the west coast of Sardinia. Offshore, he heard of the fate of 80 Muslim men, women and children who had been abducted from North Africa and were being sold into slavery. Between Sardinia and Sicily, the ship ran into a severe storm. He said of the Italians and Muslims on board who had experience of the sea that "all agreed that they had never in their lives seen such a tempest". After the storm, the ship went on past Sicily and Crete and turned south and crossed over to the North African coast. He arrived in Alexandria on March 26.

Saladin and the mamluks assured the protection of xaravan routes that allowed travel to distant lands.

Everywhere that Ibn Jubayr travelled in Egypt, he was full of praise for the new Sunni ruler, Saladin. For example, he said, "There is no congregational or ordinary mosque, no mausoleum built over a grave, nor hospital, nor theological college, where the bounty of the Sultan does not extend to all who seek shelter or live in them". He pointed out that when the Nile did not flood enough, Saladin remitted the land tax from the farmers. He also said that "such is his (Salahuddin's) justice, and the safety he has brought to his high-roads that men in his lands can go about their affairs by night and from its darkness apprehend no awe that should deter them". Ibn Jubayr, on the other hand, was very disparaging of the previous Shi'a dynasty of the Fatimids.

Of Cairo, Ibn Jubayr noted, the colleges and hostels that were erected for students and pious men of other lands by the Saladin. In those colleges, students found lodging and tutors to teach them the sciences that they desired as well as also allowances to cover their needs. The care of the sultan also granted them baths, hospitals, and the appointment of doctors, who could even come to visit them at their place of stay who would be answerable for their cure. One of Saladin's other generous acts was that every day, 2000 loaves of bread were distributed to the poor. Also impressing Ibn Jubayr in the city was the number of mosques, estimated at between 8,000 and 12,000, with four or five of them often in the same street.

Upon arrival at Alexandria Ibn Jubayr was angered by the customs officials who insisted on taking zakat from the pilgrims, regardless of whether or not they were obliged to pay. In the city, he visited the Lighthouse of Alexandria, which was then still standing, and he was amazed by its size and splendour.

He was also impressed by the free colleges, hostels for foreign students, baths and hospitals in the city. They were paid for by awqaf and taxes on the city's Jews and Christians. He noted that there were between 8,000 and 12,000 mosques in Alexandria. After a stay of eight days, he set off to Cairo. 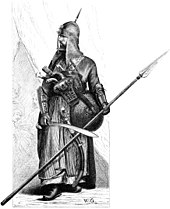 An Egyptian mamluk in full armour, with lance, shield and sabre

He reached Cairo three days later. In the city, he visited the cemetery at al-Qarafah, which contained the graves of many important figures in the history of Islam. He noted that under Saladin, the walls of the citadel were being extended by the Mamluks with the object of reinforcing the entire city from any future Siege by Crusaders. Another work that he saw being built was a bridge over the Nile, which would be high enough not to be submerged in the annual flooding of the river. He saw a spacious free hospital, which was divided into three sections: for men, women and the insane. He saw the pyramids, but he was unaware for whom they had been built, and the Sphinx. He also saw a device that was used to measure the height of the Nile flood.

In Sicily, at the very late stages of his travels (December 1184 to January 1185), Ibn Jubayr recounted other experiences. He commented on the activity of the volcanoes:

Also striking Ibn Jubayr was the city of Palermo, which he described as follows: 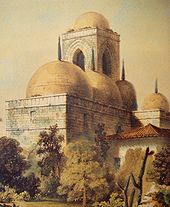 Ibn Jubayr also travelled to Medina, Mecca, Damascus, Mosul, Acre and Baghdad. At Basra, he saw how Indian timber was carefully used to make Lateen sail ships. He returned in 1185 by way of Sicily. His path was not without troubles, including a shipwreck. On both occasions, he travelled on Genoese ships.

Jubayr travelled to the East on two further occasions (1189–1191 and 1217) without leaving any account. He died on the 29 November 1217 in Alexandria, during the second trip.

Ibn Jubayr provides a highly-detailed and graphic description of the places he visited during his travels. The book differs from other contemporary accounts in not being a mere collection of toponyms and descriptions of monuments but containing observation of geographical details as well as cultural, religious and political matters. Particularly interesting are his notes about the declining faith of his fellow Muslims in Palermo after the recent Norman conquest and about what he perceived as the Muslim-influenced customs of King William II of Sicily under the Norman-Arab-Byzantine culture.

His writing is a foundation of the genre of work called Rihla, or the creative travelogue. It is a mix of personal narrative, description of the areas traveled and personal anecdotes.

Ibn Jubayr's travel chronicle served as a model for later authors, some of whom copied from it without attribution. Ibn Juzayy, who wrote the account of Ibn Battuta's travels in around 1355 AD, copied passages that had been written 170 years earlier by Ibn Jubayr that described Damascus, Mecca, Medina and other places in the Middle East. Passages copied from Ibn Jubayr are also found in the writings of al-Sharishi, al-Abdari and Al-Maqrizi.

Jubair is widely identified as Jubair Al-Hakim from the video game series Assassin's Creed, where he preaches in Damascus before being killed by the protagonist, Altaïr Ibn-La'Ahad.