Immigration and Nationality Act of 1965

"Hart–Celler Act" redirects here. It is not to be confused with Luce–Celler Act of 1946.

The Immigration and Nationality Act of 1965, also known as the Hart–Celler Act, is a federal law passed by the 89th United States Congress and signed into law by President Lyndon B. Johnson. The law abolished the National Origins Formula, which had been the basis of U.S. immigration policy since the 1920s. The act removed de facto discrimination against Southern and Eastern Europeans, Asians, as well as other non-Northwestern European ethnic groups from American immigration policy.

The National Origins Formula had been established in the 1920s to preserve American homogeneity by promoting immigration from Northwestern Europe. During the 1960s, at the height of the Civil Rights Movement, this approach increasingly came under attack for being racially discriminatory. With the support of the Johnson administration, Senator Philip Hart and Congressman Emanuel Celler introduced a bill to repeal the formula. The bill received wide support from both northern Democratic and Republican members of Congress, but strong opposition mostly from Southern Democrats, the latter mostly voting Nay or Not Voting. This issue served as an inter-party commonality amongst constituents and reflects the similar Congressional District and Representative voting patterns. President Johnson signed the Hart–Celler Act into law on October 3, 1965. In opening entry to the U.S. to immigrants other than Northwestern European and Germanic groups, the Act significantly altered immigration demographics in the U.S.

The Hart–Celler Act created a seven-category preference system that gives priority to relatives and children of U.S. citizens and legal permanent residents, professionals and other individuals with specialized skills, and refugees. The act maintained per-country and total immigration limits, but included a provision exempting immediate relatives of U.S. citizens from numerical restrictions. The act also set a numerical limit on immigration from the Western Hemisphere for the first time in U.S. history. Though proponents of the bill had argued that it would not have a major effect on the total level of immigration or the demographic mix of the United States, the act greatly increased the total number of immigrants coming to the United States, as well as the share of immigrants coming to the United States from Asia and Africa.

In the 1960s, the United States faced both foreign and domestic pressures to change its nation-based formula, which was regarded as a system that discriminated based on an individual's place of birth. Abroad, former military allies and new independent nations aimed to delegitimize discriminatory immigration, naturalization and regulations through international organizations like the United Nations. In the United States, the national-based formula had been under scrutiny for a number of years. In 1952, President Truman had directed the Commission on Immigration and Naturalization to conduct an investigation and produce a report on the current immigration regulations. The report, Whom We Shall Welcome, served as the blueprint for the Hart–Celler Act. At the height of the Civil Rights Movement the restrictive immigration laws were seen as an embarrassment. President Lyndon B. Johnson signed the 1965 act into law at the foot of the Statue of Liberty, ending preferences for white immigrants dating to the 18th century.

The immigration into the country of "sexual deviants", including homosexuals, was still prohibited under the legislation. The INS continued to deny entry to homosexual prospective immigrants on the grounds that they were "mentally defective", or had a "constitutional psychopathic inferiority" until the Immigration Act of 1990 rescinded the provision discriminating against gay people.

The Hart–Celler Act amended the Immigration and Nationality Act of 1952, or McCarran–Walter Act, while it upheld many provisions of the Immigration Act of 1924. It maintained per-country limits, which had been a feature of U.S. immigration policy since the 1920s, and it developed preference categories.

As per the rules under the Immigration and Nationality Act, U.S. organizations are permitted to employ foreign workers either temporarily or permanently to fulfill certain types of job requirements. The Employment and Training Administration under the U.S. Department of Labor is the body that usually provides certification to employers allowing them to hire foreign workers in order to bridge qualified and skilled labor gaps in certain business areas. Employers must confirm that they are unable to hire American workers willing to perform the job for wages paid by employers for the same occupation in the intended area of employment. However, some unique rules are applied to each category of visas. They are as follows:

President Lyndon B. Johnson signs the bill into law as Vice President Hubert Humphrey, Senators Edward M. Kennedy and Robert F. Kennedy and others look on.

The Hart–Celler Act was widely supported in Congress. Senator Philip Hart introduced the administration-backed immigration bill which was reported to the Senate Judiciary Committee's Immigration and Naturalization Subcommittee. Representative Emanuel Celler introduced the bill in the United States House of Representatives, which voted 320 to 70 in favor of the act, while the United States Senate passed the bill by a vote of 76 to 18. In the Senate, 52 Democrats voted yes, 14 no, and 1 abstained. Among Senate Republicans, 24 voted yes, 3 voted no, and 1 abstained. In the House, 202 Democrats voted yes, 60 voted no and 12 abstained, 118 Republicans voted yes, 10 voted no and 11 abstained. In total, 74% of Democrats and 85% of Republicans voted for passage of this bill. Most of the no votes were from the American South, which was then still strongly Democratic. During debate on the Senate floor, Senator Ted Kennedy, speaking of the effects of the Act, said, "our cities will not be flooded with a million immigrants annually. ... Secondly, the ethnic mix of this country will not be upset."

Democrat Rep. Michael A. Feighan (OH-20), along with some other Democrats, insisted that "family unification" should take priority over "employability", on the premise that such a weighting would maintain the existing ethnic profile of the country. That change in policy instead resulted in chain migration dominating the subsequent patterns of immigration to the United States. In removing racial and national discrimination the Act would significantly alter the demographic mix in the U.S.

On October 3, 1965, President Lyndon B. Johnson signed the legislation into law, saying, "This [old] system violates the basic principle of American democracy, the principle that values and rewards each man on the basis of his merit as a man. It has been un-American in the highest sense, because it has been untrue to the faith that brought thousands to these shores even before we were a country." 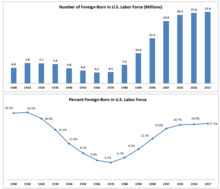 The proponents of the Hart–Celler Act argued that it would not significantly influence United States culture. President Johnson said it was "not a revolutionary bill. It does not affect the lives of millions." Secretary of State Dean Rusk and other politicians, including Sen. Ted Kennedy (D-MA), asserted that the bill would not affect the U.S. demographic mix. However, following the passage of the law, the ethnic composition of immigrants changed, altering the ethnic makeup of the U.S. with increased numbers of immigrants from Africa, the Americas, Asia, and the West Indies. The 1965 act also imposed the first cap on total immigration from the Americas, marking the first time numerical limitations were placed on immigration from Latin American countries, including Mexico.

Before 1965, immigrants to the U.S. had mostly come from Europe; 68 percent of legal immigrants in the 1950s came from Europe and Canada. However, in the years 1971–1991, immigrants from Hispanic and Latin American countries made up 47.9 percent of immigrants (with Mexico accounting for 23.7 percent) and immigrants from Asia 35.2 percent. In the twenty years following passage of the law, 25,000 professional Filipino workers, including thousands of nurses, entered the U.S. under the law's occupational provision.

The elimination of the National Origins Formula and the introduction of numeric limits on immigration from the Western Hemisphere, along with the strong demand for immigrant workers by U.S. employers, led to rising numbers of undocumented immigrants in the U.S. in the decades after 1965, especially in the Southwest. Policies in the Immigration Reform and Control Act of 1986 that were designed to curtail migration across the Mexico–U.S. border led many unauthorized workers to settle permanently in the U.S. These demographic trends became a central part of anti-immigrant activism from the 1980s, leading to greater border militarization, rising apprehension of undocumented immigrants by the Border Patrol, and a focus in the media on the criminality of undocumented immigrants.

The Immigration and Nationality Act's elimination of national and ethnic quotas has limited recent efforts at immigration restriction. In January 2017, President Donald Trump's Executive Order 13769 temporarily halted immigration from seven majority-Muslim nations. However, lower federal courts ruled that the executive order violated the Immigration and Nationality Act's prohibitions of discrimination on the basis of nationality and religion. In June 2017, the U.S. Supreme Court overrode both appeals courts and allowed the second ban to go into effect, but carved out an exemption for persons with "bona fide relationships" in the U.S. In December 2017, the U.S. Supreme Court allowed the full travel ban to take effect, which excludes people who have a bona fide relationship with a person or entity in the United States. In June 2018, the Supreme Court upheld the travel ban in Trump v. Hawaii, saying that the president's power to secure the country's borders, delegated by Congress over decades of immigration lawmaking, was not undermined by the president's history of arguably incendiary statements about the dangers he said some Muslims pose to the United States.

Retrieved from "https://en.wikipedia.org/w/index.php?title=Immigration_and_Nationality_Act_of_1965&oldid=1003545645"
Uses material from the Wikipedia article Immigration and Nationality Act of 1965, released under the CC BY-SA 3.0 license.