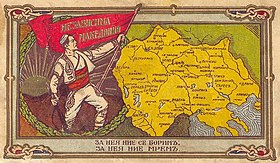 Postcard issued during 1920s of the Ilinden (Organization) in Sofia, presenting an imagined Independent Macedonia.

Macedonian Tribune Newspaper's issue from Easter, 17 April 1941. The Macedonian Patriotic Organization then, greeted the Axis' invasion on the Balkans as a liberation. Headline reads: Macedonians: Christ is risen. Belgrade has fallen. Independence for Macedonia.

The predecessor of the concept of Independent Macedonia appeared initially in the late 19th century as variant called autonomous Macedonia in the documents of the Internal Macedonian-Adrianople Revolutionary Organization. The organization was founded in 1893 in Ottoman Thessaloniki by a small band of anti-Ottoman Macedono-Bulgarian revolutionaries. The idea then was strictly political and did not imply a secession from Bulgarian ethnicity, but unity of all nationalities in the area, then under Ottoman control. During the Balkan Wars and the First World War the organization supported the Bulgarian army and joined to Bulgarian war-time authorities when they temporarily took control over mosts of Thrace and Macedonia. In this period autonomism as a political tactic was abandoned and annexationist positions were supported, aiming eventual incorporation of occupied areas into Bulgaria. However Bulgaria lost the Wars.

In the aftermath of World War I, the IMRO developed an agenda for an autonomous or even independent Macedonia, on the territories of Greece, Yugoslavia and Bulgaria, under the protectorate of the Great Powers, that meant in fact a second Bulgarian state on the Balkans. It accepted this concept with the aim to annex the territories occupied by Serbia and Greece. IMRO then had de facto full control of Pirin Macedonia (Bulgarian part), which it used as a base for hit and run attacks against Yugoslavia and Greece. It acted as a "state within a state", with the unofficial support of the right-wing Bulgarian governments. Ivan Mihailov and Alexander Protogerov, who assumed IMRO's leadership after Todor Alexandrov's death in 1924, changed the main task for an autonomous Macedonian state, but officially under Bulgarian control, as it was a way for a subsequent unification with Bulgaria.

By 1928, after the assassination of Protogerov, Mihailov proposed a new plan calling for unification of a pre-1913 Macedonia region into a single state, that would be independent from Bulgaria. It should be with prevailing ethnic Bulgarian element. However the new state would to be supranational and cantonized, something as "Switzerland on the Balkans". Nevertheless, the IMRO continued to support Bulgarian irredentism. It had close ties to diaspora organizations abroad, the most important of which was the Macedonian Patriotic Organization in the United States and Canada. The organization was suppressed by the Bulgarian army after the 1934 Military coup.

As the Bulgarian army as part from Axis-powers entered Yugoslav and Greek Macedonia during WWII in April 1941, former IMRO members were active in organising Bulgarian Action Committees, charged with taking over the local authorities. After Bulgaria switched sides in September 1944, some former IMRO activists tried to create an independent Macedonian state. The state had to have a Bulgarian character and its official language to be Bulgarian. It would be placed under the protectorate of the Third Reich, but they failed.

The Comintern policy on the Macedonian question rose the slogan of a united and independent Macedonia at the 5th Conference of the Balkan Communist Federation in 1923. After the failure of the May Manifesto signed in 1924 by the leadership of the IMRO, which maintained the independence and unification of the region of Macedonia, and cooperation with the Soviet Union, some left-wing revolutionaries of the IMRO founded the so-called IMRO (United) in 1925 in Vienna. Its main objective was to free the region of Macedonia, and to create a new political entity which would become an equal member of the future Balkan Communist Federation. IMRO (United) was sponsored directly by the Comintern, maintaining close links with its Bulgarian leader Georgi Dimitrov. In 1934 it supported the Resolution of the Comintern on the Macedonian Question, in which for the first time, an international organization has recognized the existence of a separate Macedonian nation and language. However the IMRO (United), was not particularly influential on the revolutionary movement in the region. Prior to the Second World War, thеsе views on the Macedonian question have been of little practical importance.

During the War the Macedonist ideas were partially supported by the Yugoslav Partisans, who strengthened their positions. However in September 1944, Nazi Germany briefly sought to establish an Independent State of Macedonia, a puppet state in the territory of the Kingdom of Yugoslavia that had been occupied by the Kingdom of Bulgaria following the invasion of Yugoslavia in April 1941. In the late 1944, this state was dissolved and the communists founded SR Macedonia as part of Communist Yugoslavia. The local high-ranking politician Metodija Andonov-Čento, who tried to create a fully independent Macedonia, was charged of being supporter of pro-Bulgarian ideas, and was sentenced to eleven years in prison under forced labor.

During the breakup of Yugoslavia which occurred in the early 1990s, an independence referendum was held in the Socialist Republic of Macedonia on 8 September 1991, that was approved by 96.4% of votes.