Not to be confused with Business park.
Area for development of industry

An industrial park (also known as industrial estate, trading estate) is an area zoned and planned for the purpose of industrial development. An industrial park can be thought of as a more "heavyweight" version of a business park or office park, which has offices and light industry, rather than heavy industry. 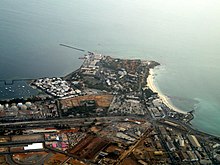 Industrial parks are usually located on the edges of, or outside, the main residential area of a city, and are normally provided with good transportation access, including road and rail. One such example is the large number of industrial estates located along the River Thames in the Thames Gateway area of London. Industrial parks are usually located close to transport facilities, especially where more than one transport modes coincide, including highways, railroads, airports and ports. Another common feature of a North American industrial park is a water tower, which helps to hold enough water to meet the park's demands and for firefighting purposes, and also advertises the industrial park and locality, as usually the community's name and logo are painted onto its surface.

This idea of setting land aside through this type of zoning has several purposes:

Different industrial parks fulfill these criteria to differing degrees. Many small communities have established industrial parks with only access to a nearby highway, and with only the basic utilities and roadways. Public transportation options may be limited or non-existent.

Industrial parks in developing countries such as Pakistan face a myriad of additional difficulties. This includes the availability of a skilled workforce and the clustering together of radically different industrial sectors (pharmaceuticals and heavy engineering, for example), which often leads to unfavorable outcomes for quality centered industries.

Flatted factories exist in cities like Singapore and Hong Kong, where land is scarce. These are typically similar to flats, but house individual industries instead. Flatted factories have cargo lifts and roads that serve each level, providing access to each factory lot.