Jacumba Hot Springs (/həˈkuːmbə/ hə-KOOM-bə) is an unincorporated community in the Mountain Empire area of southeastern San Diego County, California, United States. For statistical purposes, the United States Census Bureau defined Jacumba Hot Springs as a census-designated place (CDP) for the first time in the 2010 census, with a population of 561. The census definition of the area may not precisely correspond to local understanding of the area with the same name. The ZIP code is 91934 and the town lies within area code 619. Its elevation is 2,829 feet (862 m) above mean sea level (AMSL). On February 26, 2013, the Federal Geographic Names Commission approved a petition by a citizen committee to change the town's name from Jacumba to Jacumba Hot Springs. 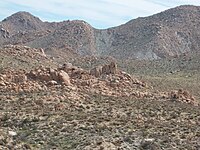 The Kumeyaay peoples occupied the Jacumba area prior to European settlement. They were likely attracted by the warm Jacumba hot spring (temperature 104 °F [40 °C]), one of many mineral hot springs which occur up and down the Peninsular Ranges of California. Ranchers occupied the area in the 19th century and were often in conflict with the indigenous population. 15 Kumeyaay and one White died in an event connected to alleged cattle rustling during the Jacumba Massacre of February 27, 1880.

Around the turn of the 20th century, the health and relaxation benefits of natural hot springs began to be commercialized. The Jacumba hot spring is prolific and delivered enough water to fill large public baths, the remains of which can still be seen. The water contains sulfur but has a pleasant clean smell. In 1919 rail service connected Jacumba to San Diego. By 1925 the town had a world class hotel, the Hotel Jacumba. In the 1930s, Jacumba had developed into a top destination and had a population of about 1,150. Many of the foremost movie stars and celebrities of the time regarded Jacumba as a prime destination for relaxation.

Jacumba's role as a prime destination continued through World War II; however as the southernmost California hot spring, it began to feel competition from more northern ones, including Murrieta and Palm Springs. After the new Interstate 8 bypassed Jacumba by two miles, most of the roadside service businesses folded and the community went into economic decline.

The Jacumba Hotel closed and was destroyed in an arson fire in 1983. The ruins stood until 1991. Today, the stub of the massive central fireplace can still be seen. The great public baths closed, the swimming pool was filled in, and the well was capped by its rights-owner.

In the 1980s, the Jacumba Motel was the only hotel facility left in Jacumba. However, the area continues to attract primarily foreign visitors and the motel has acquired rights to the spring and opened a spa. In 2002 the facility was sold with the intent of renovating it into a timeshare spa-type resort. In 2006 it was resold and set up as a bed and breakfast. The facility was closed in from 2010 to 2013. After a complete renovation, it was re-opened on June 28, 2013. It is in operation as the Jacumba Hot Springs Spa and Motel.

Jacumba Hot Springs is located on the Mexican border. A small settlement exists on the Mexican side, known as Jacume; the unmanned crossing was closed in 1995. The new, enlarged border fence now runs through the area. The United States Border Patrol maintains an increased presence in the area to curtail smuggling and illegal immigration.

Near Jacumba is the former site of the Mountain Springs Station a California Historical Landmark number 568 that reads:

NO. 194 MOUNTAIN SPRINGS STATION - From 1862-70, Peter Larkin and Joe Stancliff used a stone house about a mile north of here as a store from which ox teams pulled wagons up a 30% grade. The San Diego and Fort Yuma Turnpike Co. used the site as a toll road station until 1876. The crumbling house was replaced in 1917 by another still visible to its east. But road changes, beginning in 1878 and culminating in today's highway, have left the older stone house ruins inaccessible.