John Brown (2 August 1797 – 7 February 1861) was a geographer, and was particularly interested in Franklin's lost expedition.

Brown was born in Dover in 1797, and served for some time as a midshipman in the East India Company's service. In March 1819 he was forced to leave the sea because of poor eyesight. He went on to become a diamond merchant and made a fortune.

He took a keen interest in geographical exploration, and became a fellow of the Geographical Society in 1837. He presented a portrait of his friend James Weddell (the explorer of the Antarctic) to the society in 1839, with a letter advocating further expeditions. In 1843 Brown obtained a pension for Weddell's widow from Sir Robert Peel. He was a founder of the Ethnological Society of London in the same year. 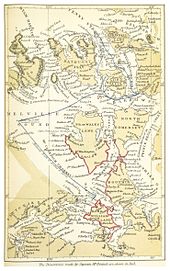 Brown became a noted advocate of expeditions in search of Sir John Franklin. He defined the area which the expedition was ultimately found to have reached, but was not attended to at the time. He published The North-west Passage and the Plans for the Search for Sir John Franklin: a review (1860). He was complimented on this work by Alexander von Humboldt. Brown made large collections illustrative of Arctic adventure.

His wife predeceased him, and he died in 1861, leaving three sons and two daughters.