For much of the mid-1990s, he lived in Los Angeles, making appearances in television series Providence, The Division, What About Brian, and Related. In 2000, he made his feature film debut in the space adventure film Space Cowboys. The next year, he had a minor role in the independent comedy Kissing Jessica Stein (2001).

He gained wide recognition when Mad Men began in July 2007. His performance earned him the Golden Globe Award for Best Actor in a Television Series – Drama in 2008 and again in 2016, and the Primetime Emmy Award for Outstanding Lead Actor in a Drama Series in 2015. He also directed two episodes of the show.

His other television credits include featuring in the Sky Arts series A Young Doctor's Notebook and guest roles in Black Mirror, Parks and Recreation, Toast of London and Wet Hot American Summer: First Day of Camp. He has also provided his voice for the animated films Shrek Forever After (2010) and Minions (2015), along with the second season of the FX series Legion (2018).

His subsequent works include portraying the angel Gabriel in the Amazon Prime Video miniseries television adaptation of Terry Pratchett and Neil Gaiman’s book, Good Omens. In 2020, he played himself in episode 8, Season 10 of the HBO series Curb Your Enthusiasm.

Hamm was born in St. Louis, Missouri, the son of Deborah (Garner) Hamm and Daniel Hamm. His father managed a family trucking company, and his mother was a secretary. He is of Irish, German, and English descent; his surname came from German immigrants.

Hamm's parents divorced when he was two years old, and he lived in the St. Louis suburb of Creve Coeur with his mother until her death from colon cancer when he was 10 years old. Hamm then lived with his father and grandmother in Normandy, Missouri.

His first acting role was as Winnie-the-Pooh in first grade. At 16, he was cast as Judas in the play Godspell, and enjoyed the experience, though he did not take acting seriously. He attended John Burroughs School, a private school in Ladue, where he was a member of the football, baseball, and swim teams. During this time, he dated Sarah Clarke, who became an actress. When Hamm was 20, his father died.

After graduation in 1989 Hamm enrolled at the University of Texas, where he was a member of the Upsilon chapter of Sigma Nu fraternity. There, Hamm was arrested for participating in a violent hazing incident in November 1990. Mark Sanders was beaten with a paddle and a broom by other fraternity members, while Hamm led Sanders around the fraternity house with a hammer claw around Sanders' testicles; Sanders' clothes were also set afire. The incident resulted in the fraternity being shut down on campus. Hamm made a plea deal and completed probation under the terms of a deferred adjudication; the charges were dismissed during August 1995.

Hamm later transferred to the University of Missouri. At Missouri he answered an advertisement from a theater company seeking players for a production of A Midsummer Night's Dream, auditioned, and was cast in the production. Other roles followed, such as Leon Czolgosz in Assassins.

After graduating in 1993 with a Bachelor of Arts degree in English, Hamm returned to his high school to teach eighth-grade acting. One of his students was Ellie Kemper, who became an actress. Years later, Hamm appeared in Kemper's Netflix series, Unbreakable Kimmy Schmidt.

Not wishing to stay in a "normal career", Hamm relocated to Los Angeles permanently during 1995 with an automobile and $150. He moved into a house with four other aspiring actors and began working as a waiter while attending auditions. He acted in theatre, including as Flavius in a production of Shakespeare's Timon of Athens with the Sacred Fools Theater Company.

Looking older than his age, he found it difficult to find work as an actor, despite representation by the William Morris Agency. During 1998, having failed to obtain any acting jobs after three years, he was terminated as a client by William Morris.

Hamm continued working as a waiter and, briefly, as a set designer for a softcore pornography movie. After repeatedly failing to get promising roles, Hamm set his 30th birthday as a deadline to succeed in Hollywood, stating:

During 2000, Hamm landed the role of romantic firefighter Burt Ridley on NBC's drama series Providence. His one-episode contract grew to 19, and allowed him to quit waiting tables. Hamm made his feature movie debut with one line in Clint Eastwood's space adventure Space Cowboys (2000); more substantial roles followed in the independent comedy movie Kissing Jessica Stein (2001) and the war film We Were Soldiers (2002). During filming of that movie, he turned 30.

Hamm's career was bolstered by his playing the recurring role of police inspector Nate Basso on Lifetime's television series The Division, from 2002 to 2004. Other minor roles followed on the television series What About Brian, CSI: Miami, Related, Numb3rs, The Unit, and The Sarah Silverman Program. Hamm's Mad Men castmate Eric Ladin said in an interview that he admired Hamm because he was persistent until he became successful as an actor.

Hamm landed his breakthrough role during 2007, when he was cast from more than 80 candidates as the protagonist character Don Draper, in AMC's drama series Mad Men. In the series, set in a fictional 1960s Madison Avenue (“Mad”) advertising agency, he plays a suave, married advertising executive with an obscure past. He recalled, "I read the script for Mad Men and I loved it. [...] I never thought they'd cast me—- I mean, I thought they'd go with one of the five guys who look like me but are movie stars". He believes that an actor with a "proven track record" would likely have been chosen if another network had broadcast the show. He went through numerous auditions; each time he explained to the casting directors what he could bring to the character, if given the part. Alan Taylor and Mad Men creator Matthew Weiner initially thought Hamm was too handsome for the role but ultimately decided, "it was perfect to cast sort of the perfect male in this part". Weiner also sensed that the actor had suffered early loss of his parents, which was similar to Draper's backstory. Hamm says that he used memories of his father to portray Draper, a well-dressed, influential man of business and society hiding great inner turmoil and experiencing changes in the world beyond his control. 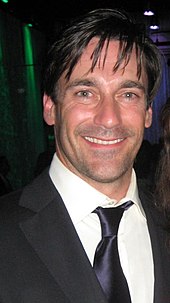 Hamm's next film role was for the 2008 science fiction movie The Day the Earth Stood Still, a remake of the 1951 film of the same name. Although the movie received mixed reviews, it was successful financially, earning $230 million worldwide. Hamm hosted Saturday Night Live, season 34, episode 6, on October 25, 2008, and played various roles, including Don Draper in two sketches. He returned as host again on January 30 and October 30, 2010. During 2009, Hamm guest-featured in three episodes of the NBC television situation comedy show 30 Rock, as Drew Baird, a doctor who is a neighbor and love interest of Liz Lemon's (Tina Fey). For these performances, he received three nominations for the Primetime Emmy Award for Outstanding Guest Actor in a Comedy Series.

Hamm's first leading film role came with the independent mystery thriller Stolen in 2009, in which he played a police officer whose son has been missing for eight years. Hamm had a minor voice role in the animated feature Shrek Forever After—released during May 2010—, as an ogre leader named Brogan. Also that year, he appeared as an FBI agent in the movie The Town (2010), with Ben Affleck. After having received "about 40 scripts that were all set in the 60s, or had me playing advertising guys", Hamm was pleased that the movie offered a role "the opposite to Don Draper". The feature received generally favorable reviews and earned $144 million worldwide.

His next acting role was as defense attorney Jake Ehrlich in the independent film Howl, based on Allen Ginsberg's eponymous 1956 poem. On December 12, 2010, Hamm made a guest appearance as an FBI supervisor on Fox's animated series The Simpsons. He featured in Zack Snyder's action-fantasy film Sucker Punch (2011), as the character High Roller, and the doctor. He also had a supporting role in the comedy Bridesmaids as Kristen Wiig's "rude and arrogant sex buddy". Hamm was next seen in the independent feature Friends with Kids (2011), which he produced alongside his then-partner Jennifer Westfeldt. The story concerns a group of friends whose lives are changed as the couples in the group begin to have children.

He had a recurring role in the situation comedy The Increasingly Poor Decisions of Todd Margaret in 2012, as the servant of socio-pathic billionaire Dave Mountford (Blake Harrison). Hamm hosted the 21st ESPYS Awards on July 17, 2013. The next year, he played sports agent J.B. Bernstein in Disney's sports drama Million Dollar Arm (2014). He co-featured with Daniel Radcliffe in A Young Doctor's Notebook, playing an older version of Radcliffe's character, from December 2012 to December 2013. In December 2014, Hamm guest starred in a special Christmas episode of the British science fiction anthology series Black Mirror, titled "White Christmas". He had a number of roles during 2015, in the comedy shows Unbreakable Kimmy Schmidt and Wet Hot American Summer: First Day of Camp. He was featured in the animated comedy Minions, as the voice of Herb Overkill. Minions was a major box office success; despite mixed reviews, it grossed a total of over $1 billion worldwide.

In 2017 Hamm joined the BBC and Amazon's television adaptation of Terry Pratchett and Neil Gaiman's Good Omens as the Archangel Gabriel. 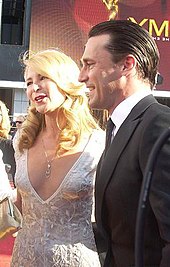 Hamm was in a relationship with actress and screenwriter Jennifer Westfeldt from 1997 to 2015. In an interview discussing his relationship with Westfeldt, Hamm said: "We may not have a piece of paper that says we're husband and wife, but after 10 years, Jennifer is more than just a girlfriend. What we have is much deeper and we both know that. To me, people get married when they're ready to have kids, which I'm not ruling out." Along with Westfeldt, Hamm has appeared in Gap-related campaign advertisements. During April 2009, Hamm and Westfeldt formed their own production company, Points West Pictures. Hamm is an animal rescue advocate.

Although his role as Don Draper required Hamm to smoke, he stopped smoking when he was 24 years old. On set he did not smoke actual cigarettes, but rather herbal cigarettes that do not contain tobacco or nicotine.

Hamm is an avid golfer and tennis player, and a devoted fan of the National Hockey League (NHL) team, the St. Louis Blues; he's even appeared in two television spots advertising for the team. He is a fan of the Major League Baseball (MLB) team the St. Louis Cardinals, and narrated the official highlight movie for the 2011 World Series, won by the Cardinals. Hamm also narrates the Amazon NFL documentary series All or Nothing since 2015.

Also, in 2012, he played in the MLB Legend and Celebrity All Star Softball game as a member of the NL. He represented the Cardinals, and hit a home run during the game. In 2018 he narrated the video The Saint Louis Browns: The Team That Baseball Forgot presented by the Saint Louis Browns Historical Society.

During March 2010, Mercedes-Benz hired Hamm (replacing actor Richard Thomas) as their new voice actor for the S400 Hybrid campaign. During 2013, American Airlines debuted a television commercial titled "Change is in the Air", featuring Hamm's voice-over. Hamm is an American Airlines frequent flier, and his Mad Men character Don Draper often spoke of aspiring to win such accounts as American Airlines. Hamm has also appeared in several commercials in an ongoing ad campaign for H&R Block income tax services. He also appears in ongoing ads in Canada for SkipTheDishes.

Internationally considered as a sex symbol, Hamm was named one of Salon.com's Sexiest Man Living in 2007 and one of People magazine's Sexiest Men Alive in 2008. During November 2008, Entertainment Weekly named him one of their Entertainers of the Year. He again was named one of the magazine's Entertainers of the Year during 2010. Hamm also won GQ's "International Man" award during September 2010. 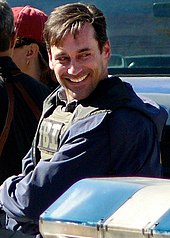 Hamm on the set of The Town in September 2009

Hamm has won an Emmy, two Golden Globes, and two Screen Actors Guild Awards, among others.