Jordan Taylor Clarkson (born June 7, 1992) is a Filipino-American professional basketball player for the Utah Jazz of the National Basketball Association (NBA). He played college basketball for two seasons with Tulsa before transferring to Missouri, where he earned second-team all-conference honors in the Southeastern Conference (SEC). After foregoing his senior year in college to enter the 2014 NBA draft, Clarkson was selected by the Washington Wizards in the second round with the 46th overall pick and was immediately traded to the Los Angeles Lakers. In his first year, he was named to the NBA All-Rookie First Team, a rarity for a second-round pick. Clarkson was traded to the Cavaliers in 2018. In December 2019 he was traded to the Jazz.

Clarkson was born in Tampa, Florida to African-American Mike Clarkson and Annette Tullao Davis, who is of partial Filipino American heritage. Davis's mother, Marcelina Tullao Kingsolver, was from Bacolor, Pampanga. Both his parents served in the United States Air Force and divorced when Clarkson was young, with Clarkson's father later remarrying Janie Clarkson. He moved to San Antonio, Texas around the age of six. He attended Karen Wagner High School in San Antonio. As a sophomore, he averaged 10 points per game while earning honorable mention all-district accolades. As a junior, he averaged 20 points, six rebounds and four assists per game, leading his team to a 32-8 record and the Class 5A state semi-finals.

On November 11, 2009, Clarkson signed a National Letter of Intent to play college basketball at the University of Tulsa.

As a senior, he averaged 18.9 points, 6.1 rebounds, 3.4 assists, and 2.1 steals, leading his team to a 38-2 record and a semi-final loss in the state championship. He was also named San Antonio High School Player of the Year. 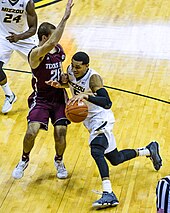 Clarkson with Missouri in March 2014

In his freshman season at Tulsa, Clarkson was named to the 2011 Conference USA All-Freshman team after being named the Conference USA Freshman of the Week four times in 2010–11. In 27 games (nine starts), he averaged 11.5 points, 2.1 rebounds, and 1.9 assists in 24.9 minutes per game.

In his sophomore season, he was named to the All-Conference USA first team and the NABC All-District 11 team. In 31 games (all starts), he averaged 16.5 points, 3.9 rebounds and 2.5 assists in 33.9 minutes per game.

In May 2012, Clarkson transferred to Missouri and subsequently sat out the 2012–13 season due to NCAA transfer rules.

In his redshirted junior season, he was named to the 2014 All-SEC second team. He was also named to the Wooden Award Midseason Top 25 list in January 2014 and won three Southeastern Conference Player of the Week honors. In 35 games (all starts), he averaged 17.5 points, 3.8 rebounds, 3.4 assists and 1.1 steals in 35.1 minutes per game.

On March 31, 2014, Clarkson declared for the NBA draft, foregoing his final year of college eligibility. 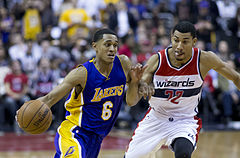 On June 26, 2014, Clarkson was selected with the 46th overall pick in the 2014 NBA draft by the Washington Wizards. He was later traded to the Los Angeles Lakers on draft night for cash considerations, and joined the team for the 2014 NBA Summer League. On August 25, 2014, he signed with the Lakers. During his rookie season, he received multiple assignments to the Los Angeles D-Fenders of the NBA Development League, and did not play for the Lakers for most of the first half of the season. However, he ended up starting 38 games for the Lakers, primarily at point guard, and averaged 15.8 points, 5.0 assists, and 4.2 rebounds as a starter. On March 24, 2015, he had a season-best game with 30 points and 7 assists in a loss to the Oklahoma City Thunder. Starting alongside Jeremy Lin, the pair became the first Asian-American starting backcourt in league history. On March 30 and April 1, Clarkson recorded back-to-back double-doubles. For the season, he was named to the NBA All-Rookie First Team. In the prior 30 years, there had been only four other second-round picks that were named to the first team.

On February 8, 2018, Clarkson was traded, along with Larry Nance Jr., to the Cleveland Cavaliers in exchange for Isaiah Thomas, Channing Frye and a 2018 first-round draft pick. In his debut for the Cavaliers three days later, Clarkson scored 17 points in a 121–99 win over the Boston Celtics. The Cavaliers reached the 2018 NBA Finals, where they were defeated in four games by the Golden State Warriors.

On December 24, 2019, Clarkson was traded to the Utah Jazz in exchange for Dante Exum and two future second-round draft picks. On January 30, 2020, Clarkson scored a season-high 37 points in a 100–106 loss to the Denver Nuggets.

In 2011, talks were initiated for Clarkson to play for the Philippines men's national basketball team. However, Clarkson did not meet the FIBA eligibility requirements to be considered a Filipino citizen as he acquired his Philippine passport after the age of 16. He is eligible, though, to play for the team as a naturalized citizen.

Clarkson visited the Philippines in August 2015 upon the invitation from Manuel V. Pangilinan to observe the training of Gilas Pilipinas, aside from fulfilling his commitments as endorser of Smart Communications. In an interview, SBP Executive Director Sonny Barrios confirmed that Clarkson has carried a Philippine passport since he was 12 and so he will not need to go through the naturalization process to be able to represent the Philippines in international competitions. Clarkson did not make the final cut due to scheduling conflicts with the Los Angeles Lakers. The Lakers agreed to let Clarkson play, but the NBA collective bargaining agreement requires that national team play should not interfere with the Lakers team requirements, which expected players to report in September 28; however, the tournament ran until October 3. Clarkson expressed his disappointment that he won't be able to represent the Philippines for the 2015 FIBA Asia Championship. Clarkson was initially included to the 17-man pool of the Philippines for its lineup for the final Olympic Qualifying Tournament for the 2016 Rio Olympics. However, due to time constraints and a complicated eligibility process, the team instead opted for the services of Andray Blatche as its naturalized player due to the team's lack in size.

In August 2018, the NBA cleared Clarkson to play for the Philippine team in the 2018 Asian Games that was held from August 18 to September 2, 2018 with a one-time exception. Clarkson was able to play for the Philippines for the first time. His first game with the national team was against China in which Clarkson led all scorers with 28 points but fell short of the match 82–80. In his second game with the national team, Clarkson once again led his team with a 25-point performance but could not overcome Korea. The team bowed out of a podium finish. Clarkson managed to get his first win with the national team, defeating Japan 113–80, in which he recorded 22 points, six rebounds and nine assists. Clarkson ended the tournament with a win, beating Syria 109–55 with a 29-point performance earning the Philippines a fifth-place finish, its best in 16 years.

Clarkson has dual citizenship with the Philippines and the United States. His Filipino citizenship is by virtue of ancestral descent. Clarkson is dating model Ally Rossel.