Joshua Thomas Radnor (born July 29, 1974) is an American actor, filmmaker, author, and musician. He is best known for portraying Ted Mosby on the popular, Emmy Award-winning, CBS sitcom How I Met Your Mother. He made his writing and directorial debut with the 2010 comedy drama film Happythankyoumoreplease, for which he won the Sundance Film Festival Audience Award and was nominated for the Grand Jury Prize.

In 2012, he wrote, directed and starred in his second film, Liberal Arts, which premiered at the 2012 Sundance Film Festival. In 2014, Radnor portrayed Isaac in the Broadway play Disgraced, which was nominated for the Tony Award for Best Play. He then starred as Dr. Jedediah Foster on the PBS American Civil War drama series Mercy Street, Lou Mazzuchelli in the musical series Rise, and as Lonny Flash in Hunters.

He grew up in Bexley, Ohio, a suburb of Columbus, and was raised in Conservative Judaism. He attended the Orthodox Jewish day school Columbus Torah Academy before going to Bexley High School and then Kenyon College, where his school's theater department presented him with the Paul Newman Award and during which he spent a semester (Spring 1995) training at the National Theater Institute at the Eugene O'Neill Theater Center in Waterford, Connecticut. He graduated from Kenyon with a Bachelor of Arts in drama in 1996. Radnor received his Master of Fine Arts degree in acting from New York University's graduate acting program at the Tisch School of the Arts in 1999. Radnor participated in an Israel experience program in Tzfat with Livnot U'Lehibanot in 1997. 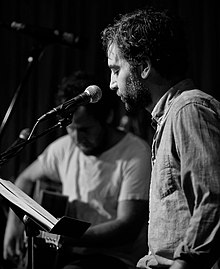 Radnor was cast as the lead in The WB series Off Centre. However, the role was re-cast with Eddie Kaye Thomas before the first episode aired. In 2002, he made his Broadway debut in the stage version of The Graduate, succeeding Jason Biggs, opposite Kathleen Turner and Alicia Silverstone. In 2004, Radnor starred in The Paris Letter alongside his future How I Met Your Mother co-star, Neil Patrick Harris. From 2005 to 2014, Radnor starred in How I Met Your Mother, his biggest role to date.

In July 2008, he starred opposite Jennifer Westfeldt in the premiere of the play Finks, written by Joe Gilford and directed by Charlie Stratton for New York Stage and Film. Radnor made his directorial debut with the film Happythankyoumoreplease, where he was both the writer and star of the 2010 comedy-drama. His second directorial effort, Liberal Arts, starring himself and Elizabeth Olsen, premiered at the Sundance Film Festival on January 22, 2012. Radnor appeared in the Broadway production of Disgraced, which opened October 23, 2014 at the Lyceum Theatre. He is set to direct the sci-fi thriller film The Leaves. Radnor is currently starring in the Amazon Prime series, Hunters, as Lonny Flash.

In October of 2016, Radnor also confirmed he is in a band, Radnor and Lee, with Australian musician Ben Lee. Radnor and Lee had known each other for "twelve or thirteen years after meeting on the set of How I Met Your Mother" eventually writing songs together. Their debut album, Radnor & Lee was released on November 10, 2017. On February 19, 2020, Spin announced Radnor and Lee's sophomore album, Golden State would be out May 8, 2020 on Flower Moon Records and premiered the first single "Outside In."

In 2008, Radnor told the Los Angeles Times, "I do Transcendental Meditation, and part of the reason I chose my house is that I thought it would be a great place to meditate."

Radnor is an avid Cloud Cult fan. He collaborated with the band to make the film The Seeker in 2016. Radnor explained, "What's true for me about a lot of music, but especially true for Cloud Cult's music, is that it stirs up the thing that's already in you and calls it out. If this film is able to do that, I'll sleep well at night."

Radnor is a registered Democrat.