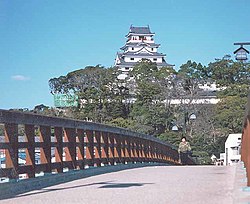 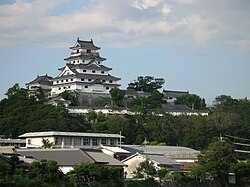 Karatsu (唐津市, Karatsu-shi) is a city located in Saga Prefecture on the island of Kyushu, Japan. Its name, formed from the Japanese word roots 唐 kara (China, or continental East Asia in general), and 津 tsu (port), signifies its historical importance as an ancient trading port between Japan with China and Korea. The central area of Karatsu, which does not include the former cities and villages of Higashimatsuura District, has a population of 78,386.

On January 1, 2006, the village of Nanayama (from Higashimatsuura District) was merged into Karatsu.

Due to its proximity to mainland Asia, Karatsu has long been known as a stopover to Korea and China.

Under ritsuryō, the current city area was part of the Hizen Province. In 1591, on the coast of the northern part of the city (formerly the town of Chinzei), Nagoya Castle was constructed. The following year, it became the location from which the Imjin War was launched by Toyotomi Hideyoshi. In the middle of 1593, Terazawa Hirotaka created the Karatsu Domain and began governing it. In 1602, replacing Nagoya Castle, Karatsu Castle was constructed in what is now the heart of Karatsu. The tower of Karatsu Castle was built in 1966 .

The graceful Karatsu Castle stands watch over this castle town.

Karatsu is famous for its Karatsu Kunchi festival, which runs annually from November 2 to November 4 and is visited by approximately 500,000 visitors from all over Japan. The festival consists of 14 hikiyama (floats made of many layers of paper mache) being carried around the city's narrow streets to calls of "Enya!". Some hikiyama members say "Yoisa!". This accompaniment is one of the 100 Soundscapes of Japan. Regularly during Karatsu Kunchi, people in this town open their homes to friends and strangers to eat and drink; the primary focus is enjoying food, beer, and shochu, and having lively conversation.

In between Karatsu Station (唐津駅) and the main bus centre (大手口バスセンター) is a 170-metre arcade containing many small shops that specialize in Karatsu Kunchi omiyage, and the Korean-influenced local pottery which are called "Karatsu ware" since they refer to Japanese ceramic wares of Korean origin. The actual date of production of the 'Karatsu Yaki' is believed to have begun being produced sometime "during the first half of the 16th century in the late Muromachi period."

The former town of Yobuko merged with Karatsu on January 1, 2005.

Yobuko is famed for its fresh squid, Ika (烏賊) (いか） in Japanese, which is offered sashimi style, or it can be eaten while the squid is still alive. Yobuko also attracts local tourists, who come to see the Yobuko Big Bridge (呼子大橋).

Yobuko has a festival known as Yobuko Tsunahiki (呼子大綱引), or the Yobuko Tug of War, which takes place annually on the first Saturday and Sunday of June. The event involves a big tug-o-war between two factions in the town, the fishermen and farmers, and local legend says that if the hills faction wins, there will be a good harvest that year; and if the sea faction wins, there will be a good fishing harvest that year.

Hamatama is one of the nicest beaches in Saga Prefecture. It is located close to central Karatsu and can be accessed by the JR Chikuhi Line.

Schools for the handicapped

The closest airports are Saga Airport and Fukuoka Airport.