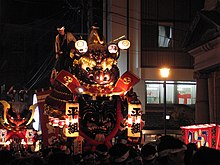 Floats make their way through the streets of Karatsu on the opening night of the festival.

Karatsu Kunchi (唐津くんち; the suffix "kunchi" simply meaning festival) is a Japanese festival that takes place annually in the city of Karatsu, Saga Prefecture, on Japan's island of Kyūshū.

The festival, which begins on the evening of November 2 and concludes on 4th, features daily parades of fourteen hikiyama, massive floats in the form of samurai helmets, sea bream, dragons, and other fantastical creatures, all constructed from wood, lacquer, and other materials. It is the major event of the Karatsu calendar, regularly drawing crowds of anywhere between 150,000 and 500,000 people from the surrounding area over the course of the three-day holiday.

Each float — which stand between five and six meters, and which weigh anywhere from two to five tons — is drawn through the streets of the city by teams of bearers selected from families living in the fourteen traditional neighborhoods of Karatsu, to the chant of "En-ya! En-ya! En-ya!"(or"Yoi-sa! Yoi-sa! Yoi-sa!") and the music of taiko drummers and flutists perched on the floats' base. The event, which is coordinated by the local Shinto shrine (near which the floats are stored during the rest of the year), has been held for several centuries now; the current incarnations of the floats were constructed between 1819 and 1876. In 1980, the festival was designated an "Important Intangible Folk Cultural Property".

Many families will spend hours preparing food for people that will visit throughout the festival. This is a regular practice.

The event takes place on the 2nd, 3 and 4 November. The 3rd is a national holiday in Japan called Culture Day.