Goldmark came from a large Jewish family. His father, Ruben Goldmark, was a chazan (cantor) to the Jewish congregation at Keszthely, Hungary, where Karl was born. Karl Goldmark's older brother Joseph became a physician and was later involved in the Revolution of 1848, and forced to emigrate to the United States. Karl Goldmark's early training as a violinist was at the musical academy of Sopron (1842–44).

He continued his music studies there and two years later was sent by his father to Vienna, where he was able to study for some eighteen months with Leopold Jansa before his money ran out. He prepared himself for entry first to the Vienna Technische Hochschule and then to the Vienna Conservatory to study the violin with Joseph Böhm and harmony with Gottfried Preyer.

The Revolution of 1848 forced the Conservatory to close down. Goldmark was largely self-taught as a composer, and he supported himself in Vienna playing the violin in theatre orchestras, at the Carlstheater and the privately supported Viennese institution, the Theater in der Josefstadt. This gave him practical experience with orchestration, an art he more than mastered. He also gave lessons: Jean Sibelius studied with him briefly. Goldmark's first concert in Vienna (1858) met with hostility, and he returned to Budapest, returning to Vienna in 1860.

To make ends meet, Goldmark also pursued a side career as a music journalist. "His writing is distinctive for his even-handed promotion of both Brahms and Wagner, at a time when audiences (and most critics) were solidly in one composer's camp or the other and viewed those on the opposing side with undisguised hostility." (Liebermann 1997) Johannes Brahms and Goldmark developed a friendship as Goldmark's prominence in Vienna grew. Goldmark, however would ultimately distance himself because of Brahms' prickly personality.

Among the musical influences Goldmark absorbed was the inescapable one, for a musical colorist, of Richard Wagner, whose anti-semitism stood in the way of any genuine warmth between them; in 1872 Goldmark took a prominent role in the formation of the Vienna Wagner Society. He was made an honorary member of the Gesellschaft der Musikfreunde, received an honorary doctorate from the University of Budapest and shared with Richard Strauss an honorary membership in the Accademia di Santa Cecilia, Rome.

Goldmark's opera Die Königin von Saba ("The Queen of Sheba"), Op. 27 was celebrated during his lifetime and for some years thereafter. First performed in Vienna on 10 March 1875, the work proved so popular that it remained in the repertory of the Vienna Staatsoper continuously until 1938. He wrote six other operas as well (see list).

The Rustic Wedding Symphony (Ländliche Hochzeit), Op. 26 (premiered 1876), a work that was kept in the repertory by Sir Thomas Beecham, includes five movements, like a suite composed of coloristic tone poems: a wedding march with variations depicting the wedding guests, a nuptial song, a serenade, a dialogue between the bride and groom in a garden, and a dance movement.

His Violin Concerto No. 1 in A minor, Op. 28, was once his most frequently played piece. The concerto had its premiere in Bremen in 1877, initially enjoyed great popularity and then slid into obscurity. A very romantic work, it has a Magyar march in the first movement and passages reminiscent of Dvořák and Mendelssohn in the second and third movements.

It has started to re-enter the repertoire, through recordings by such prominent violin soloists as Itzhak Perlman and Joshua Bell. Nathan Milstein also championed the work, and Milstein's recording of the Concerto (1957) is widely considered the definitive one. He wrote a second violin concerto, but it was never published. A second symphony in E-flat, Op. 35, is much less well-known. (Goldmark also wrote an early symphony in C major, between roughly 1858 and 1860. This work was never given an opus number, and only the scherzo seems to have ever been published.) 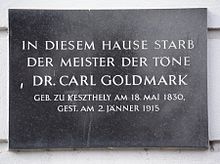 Memorial for Goldmark in Vienna.

Goldmark's chamber music, in which the influences of Schumann and Mendelssohn are paramount, although critically well received in his lifetime, is now rarely heard. It includes the String Quintet in A minor Op. 9 that made his first reputation in Vienna, the Violin Sonata in D major Op. 25, two Piano Quintets in B-flat major, Op. 30 and C-sharp minor, Op. 54, the Cello Sonata Op. 39, and the work that first brought Goldmark's name into prominence in the Viennese musical world, the String Quartet in B-flat Op. 8 (his only work in that genre). He also composed choral music, two Suites for Violin and Piano (in D major, Op. 11, and in E-flat major, Op. 43), and numerous concert overtures, such as the Sakuntala Overture Op. 13 (a work which cemented his fame after his String Quartet), the Penthesilea Overture Op. 31, the In the Spring Overture Op. 36, the Prometheus Bound Overture Op. 38, the Sappho Overture Op. 44, the In Italy Overture Op. 49, and the Aus Jugendtagen Overture, Op. 53. Other orchestral works include the symphonic poem Zrínyi, Op. 47, and two orchestral scherzos, in E minor, Op. 19, and in A major, Op. 45.

Goldmark's nephew Rubin Goldmark (1872–1936), a pupil of Dvořák, was also a composer, who spent his career in New York.

Goldmark died in Vienna and is buried in the Zentralfriedhof (Central Cemetery), along with many other notable composers. Many of his autograph manuscripts are in the collection of the National Széchényi Library, with "G" catalogue numbers attached to various works (including those without opus number.)