Annual American honor in the performing arts
Not to be confused with Presidential Medal of Freedom. 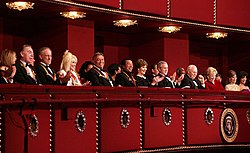 The Kennedy Center Honors is an annual honor given to those in the performing arts for their lifetime of contributions to American culture. The honors have been presented annually since 1978, culminating each December in a star-studded gala celebrating the honorees in the Kennedy Center Opera House in Washington, D.C.

The Kennedy Center Honors started in 1977, after that year's 10th-anniversary White House reception and Kennedy Center program for the American Film Institute (AFI). Roger L. Stevens, the founding chairman of the Kennedy Center, asked George Stevens Jr. (no relation), the founding director of the AFI, to hold an event for the Center. George asked Isaac Stern to become involved, and then pitched the idea to the television network CBS, who bought it. With the announcement of the first honors event and honorees, CBS vice president for specials Bernie Sofronski stated:

This is one of the few awards shows that does not air live (with the exception of closed-circuit venues), but an edited version lasting approximately two hours is normally televised on CBS after Christmas. Normally, the show has been aired between Christmas and New Year's on CBS television, but, in a departure from this tradition, The 2019 Kennedy Center Honors aired on regular television in early December and was later made available on CBS All Access.

Honoree recommendations are accepted from the general public, and the Kennedy Center initiated a Special Honors Advisory Committee, which comprises two members of the Board of Trustees as well as past honorees and distinguished artists. The Executive Committee of the Board of Trustees selects the honoree recipients based on excellence in music, dance, theater, opera, motion pictures or television. The selections are typically announced sometime between July and September.

Surrounded by the Honorees, the luncheon is held on Saturday at the Kennedy Center, with a welcoming speech by the Chairman of the Board of Trustees. At that evening's reception and dinner at the State Department, presided over by the Secretary of State, the Honorees are introduced and the Honors medallions are presented by the Chairman of the Board. The wide rainbow-colored ribbon then hung around the necks of the recipients, and prominently noticeable when the events are televised, symbolizes "a spectrum of many skills within the performing arts" according to creator Ivan Chermayeff.

On Sunday, there is an early-evening White House reception, traditionally hosted by the President of the United States and the First Lady, followed by the Honors gala performance at the Kennedy Center and supper.

On August 19, 2017, the White House announced that President Donald Trump and the first lady, Melania Trump, had decided not to participate in events honoring recipients of the 2017 Kennedy Center Honors awards to "allow the honorees to celebrate without any political distraction." President and Mrs. Trump did not attend the 2017 ceremony, held on December 3, 2017. Caroline Kennedy was the host and presented the honorees. The traditional dinner at the State Department on the Saturday evening before the ceremony was hosted by Secretary of State Rex Tillerson and the White House reception was canceled. Donald and Melania Trump also did not attend the 2018 or 2019 events. 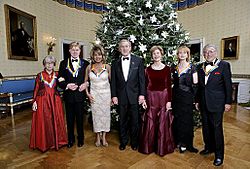 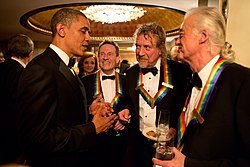 The surviving members of Led Zeppelin were honored in 2012 and are pictured here with President Barack Obama.

There have been 230 recipients to date of the Kennedy Center Honors award during the Honors' 42 years (as of 2019), although the award given to Bill Cosby in 1998 was rescinded in 2018, following his sexual assault conviction. The vast majority have been bestowed on individuals. On 11 occasions since 1985, awards have been presented to duos or groups, including three married couples who were actors: Hume Cronyn and Jessica Tandy, Paul Newman and Joanne Woodward, and Ossie Davis and Ruby Dee. The dancers Fayard Nicholas and Harold Nicholas of the Nicholas Brothers were honored, along with three musical theater songwriting duos: Alan Jay Lerner and Frederick Loewe, Betty Comden and Adolph Green and John Kander and Fred Ebb. The musicians of four music groups were awarded: Pete Townshend and Roger Daltrey of The Who, John Paul Jones, Jimmy Page and Robert Plant of Led Zeppelin, Don Henley, Timothy B. Schmit, Joe Walsh and (posthumously) Glenn Frey of the Eagles, and Philip Bailey, Verdine White, Ralph Johnson and (posthumously) Maurice White of Earth, Wind & Fire.

In 2018, the award for "trailblazing creators of a transformative work that defies category" was created and presented at the annual ceremony to the creators of the musical Hamilton: Lin-Manuel Miranda, Thomas Kail, Andy Blankenbuehler and Alex Lacamoire.

The 2019 honorees included, for the first time, a television program; the co-founders of Sesame Street, Joan Ganz Cooney and Dr. Lloyd Morrisett, accepted the Kennedy Center Honors on behalf of all of the creators. 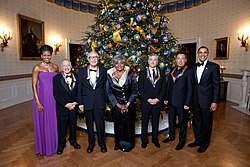 Pianist Vladimir Horowitz was to be an honoree, but the selection committee withdrew the offer when Horowitz conditioned his acceptance on being honored alone and at 4 in the afternoon.

Actress Katharine Hepburn declined the committee's first offer, though she relented in 1990.

Doris Day repeatedly turned down the honor because her fear of flying prevented her from attending the ceremony.

When considering Irving Berlin for the 1987 awards because of criticism for overlooking him, the Center was informed that Berlin wanted to be honored only if he surpassed his 100th birthday (which would not be until May 1988). Also, he was in failing health, used a wheelchair following a series of strokes, and could not attend a public event. The Center instead chose to pay special tribute to him at the 1987 Gala. He died in 1989.

Paul McCartney was selected as an honoree in 2002, but was unable to attend because of an "inescapable personal obligation," his cousin's previously planned wedding. After initially saying that McCartney's award would be postponed until the following year, the Kennedy Center announced in August 2003 that "Paul McCartney will not be receiving a Kennedy Center Honor." McCartney later became a 2010 honoree.

Mel Brooks has stated that he refused the honor when George W. Bush was in office, due to his distaste for Bush's Iraq policy, but Brooks was an honoree in 2009, the first year Barack Obama was President.

In November 2015, one month before the actual ceremony, the Eagles postponed their honors until the following year because Glenn Frey had intestinal problems that required major surgery and a long recovery period. Despite their absence, they were still honored in 2015 via a performance of "Desperado" by country singer Miranda Lambert. Frey died on January 18, 2016, though the Center made him and the three surviving members 2016 honorees.

In 2017, Norman Lear announced that he would accept the honors, but would boycott the White House ceremony because of his opposition to President Donald Trump, citing Trump's proposal to end the National Endowment for the Humanities and the National Endowment for the Arts. Lear did attend the 2017 events and ceremony, but Donald and Melania Trump were not present, becoming the first U.S. presidential couple to skip the event, in order "to allow the honorees to celebrate without any political distraction".