Ancient state in the Balkans

The Kingdom of Dardania was a polity formed in the central Balkans in the region of Dardania during classical antiquity. It is named after the Dardani, a Paleo-Balkan tribe which formed its population and formed the core of the Dardanian polity. Dardania included present-day Kosovo, northwestern North Macedonia, parts of the Sandžak region and area of Naissus in Serbia and the Kukës County in Albania. The eastern parts of Dardania were at the Thraco-Illyrian contact zone.

Dardania was first mentioned in the 4th century BC, after king Bardylis united Dardani tribes into a single state. He defeated Macedonians and Molossians several times. At this time they were strong enough to rule Macedonia through a puppet king in 392-391 BC. In 385-384 they allied with Dionysius I of Syracuse and defeated the Molossians, killing up to 15,000 of their soldiers and ruling their territory for a short period. Their continuous invasions forced Amyntas III of Macedon to pay them a tribute in 372 BC. They returned raiding the Molossians in 360. In 359 BC Bardylis won a decisive battle against Macedonian king Perdiccas III, whom he killed himself, while 4,000 Macedonian soldiers fell, and the cities of upper Macedonia were occupied. Following this disastrous defeat, king Philip II took control of the Macedonian throne in 358 and reaffirmed the treaty with the Dardani, marrying princess Audata, probably the daughter or niece of Bardylis. The time of this marriage is somewhat disputed while some historians maintain that the marriage happened after the defeat of Bardylis. This gave Philip II valuable time to gather his forces against those Dardani who were still under Bardylis, defeating them at the Erigon Valley by killing about 7,000 of them, eliminating the Dardani menace for some time.

In 334 BC, under the leadership of Cleitus, the son of Bardylis, the Dardani, in alliance with other Illyrian tribes attacked Macedonia held by Alexander the Great. The Dardani managed to capture some cities but were eventually defeated by Alexander's forces.

Celts were present in Dardania in 279 BC. The Dardanian king offered to help the Macedonians with 20,000 soldiers against the Celts, but this was refused by Macedonian king Ptolemy Keraunos. 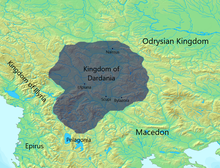 Kingdom of Dardania at its peak

Dardani were a constant threat to the Macedonian kingdom. In 230 under Longarus they captured Bylazora from the Paionians and in 229 they again attacked Macedonia, defeating Demetrius II in an important battle. In this period their influence on the region grew and some other Illyrian tribes deserted Teuta, joining the Dardani under Longarus and forcing Teuta to call off her expedition forces in Epirus. When Philip V rose to the Macedonian throne, skirmishing with Dardani began in 220-219 BC and he managed to capture Bylazora from them in 217 BC. Skirmishes continued in 211 and in 209 when a force of Dardani under Aeropus, probably a pretender to the Macedonian throne, captured Lychnidus and looted Macedonia taking 20.000 prisoners and retreating before Philip's forces could reach them.

In 201 BC, Bato of Dardania (along with Pleuratus the Illyrian and Amynander, King of Athamania) cooperated with Roman consul Sulpicius in his expedition against Philip V. Always being under the menace of Dardanian attacks on Macedonia, Philip V made an alliance with the Bastarnae at around 183 BC and invited them to settle in Polog, the region of Dardania closest to Macedonia. A joint campaign of the Bastarnae and Macedonians against the Dardanians was organized, but Philip V died and his son Perseus of Macedon withdrew his forces from the campaign. The Bastarnae crossed the Danube in huge numbers and although they didn't meet the Macedonians, they continued the campaign. Some 30,000 Bastarnae under the command of Clondicus seem to have defeated the Dardani. In 179 BC, the Bastarnae conquered the Dardani, who later in 174 pushed them out, in a war which proved catastrophic, with a few years later, in 170 BC, the Macedonians defeating the Dardani. Macedonia and Illyria became Roman protectorates in 168 BC. The Dardanian Kingdom retained its sovereignty until 28 BC, when the Romans conquered the region (and consequently it).

The Romans created the province of Moesia from parts of Dardania, but later made it a separate province. 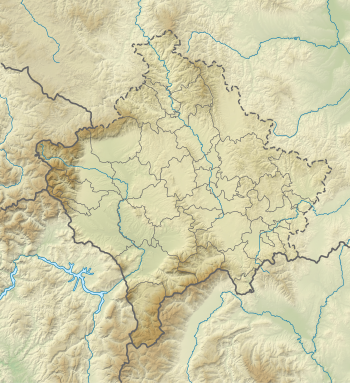 9
Identified places and settlements in Kosovo.

The Kingdom of Dardania was ruled by various kings.

Retrieved from "https://en.wikipedia.org/w/index.php?title=Kingdom_of_Dardania&oldid=1008144441"
Uses material from the Wikipedia article Kingdom of Dardania, released under the CC BY-SA 3.0 license.