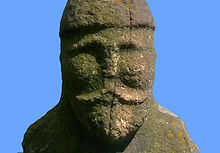 The Kipchaks, also known as Qipchaq or Polovtsians, were a Turkic nomadic people and confederation that existed in the Middle Ages, inhabiting parts of the Eurasian Steppe. First mentioned in the 8th century as part of the Second Turkic Khaganate, they most likely inhabited the Altai region from where they expanded over the following centuries, first as part of the Kimek Khanate and later as part of a confederation with the Cumans. There were groups of Kipchaks in the Pontic–Caspian steppe, Syr Darya and Siberia. The Cuman–Kipchak confederation was conquered by the Mongols in the early 13th century.

The Kipchaks interpreted their name as meaning "hollow tree" (Middle Turkic: kuv ağaç); according to them, inside a hollow tree, their original human ancestress gave birth to her son. Németh points to the Siberian qıpčaq "angry, quick-tempered" attested only in the Siberian Sağay dialect (a dialect of Khakas language) . Klyashtorny links Kipchak to qovı, qovuq "unfortunate, unlucky"; yet Golden sees a better match in qıv "good fortune" and adjectival suffix -čāq. Regardless, Golden notes that the ethnonym's original form and etymology "remain a matter of contention and speculation".

The Russian "Polovtsy" (Russian: Половецкие пляски, tr. Polovetskie plyaski) was the name given to the Kipchaks and Cumans by the Rus' people - hence the Polovtsian Dances at the end of act 2 of Alexander Borodin's opera Prince Igor.

In the Kipchak steppe, a complex ethnic assimilation and consolidation process took place between the 11th and 13th centuries. The western Kipchak tribes absorbed people of Oghuz, Pecheneg, ancient Bashkir, Bulgar and other origin; the eastern Kipchak merged with the Kimek, Karluk, Kara-Khitai and others. They were all identified by the ethnonym Kipchak.

According to Xu Qianxue's later edition of Sima Guang's Zizhi Tongjian, Kipchaks possessed "blue/green eyes and red hair". According to Ukrainian anthropologists, Kipchaks had phenotypical characteristics of Caucasians and Mongoloids, namely a broad flat face and protruding nose. Researcher E. P. Alekseeva drew attention to the fact that European Kipchak stone images have both Mongoloid and Caucasoid faces. However, in her opinion, most Kipchaks, who settled in Georgia in the first half of the 12th century, were predominantly Caucasoid with some admixture of Mongoloid traits. They were already joined by Cumans. In the course of the Turkic expansion they migrated into Siberia and further into the Trans-Volga region.

The Kipchaks were first unambiguously mentioned in Persian geographer ibn Khordadbeh's Book of Roads and Kingdoms as a northernly Turkic tribe, after Toquz Oghuz, Karluks, Kimeks, Oghuz, J.f.r (either corrupted from Jikil or representing Majfar for Majğar), Pechenegs, Türgesh, Aðkiš, and before Yenisei Kirghiz. Kipchaks possibly appeared in the 8th-century Moyun Chur inscription as Türk-Qïbchaq, mentioned as having been part of the Turkic Khaganate for fifty years; even so, this attestation is uncertain as damages on the inscription leave only -čq (𐰲𐰴) (*-čaq or čiq) readable. It is unclear if the Kipchaks could be identified with, according to Klyashtorny, the [Al]tï Sir in the Orkhon inscriptions (薛延陀; pinyin: Xuè-Yántuó), or with the Juéyuèshī (厥越失) in Chinese sources; however, Zuev (2002) identified 厥越失 Juéyuèshī (< MC *kiwat-jiwat-siet) with toponym Kürüshi in the Ezhim river valley (Ch. Ayan < MCh. 阿豔 *a-iam < OTrk. Ayam) in Tuva Depression. The relationship between the Kipchaks and Cumans is unclear.

While part of the Turkic Khaganate, they most likely inhabited the Altai region. When the Khaganate collapsed, they became part of the Kimek confederation, with which they expanded to the Irtysh, Ishim and Tobol rivers. They then appeared in Islamic sources. In the 9th century Ibn Khordadbeh indicated that they held autonomy within the Kimek confederation. They entered the Kimek in the 8th- or beginning of 9th century, and were one of seven original tribes. In the 10th-century Hudud al-'Alam it is said that the Kimek appointed the Kipchak king. The Kimek confederation, probably spearheaded by the Kipchaks, moved into Oghuz lands, and Sighnaq in Syr Darya became the Kipchak urban centre. Kipchak remnants remained in Siberia, while others pushed westwards in the Qun migration. As a result, three Kipchak groups emerged:

The early 11th century saw a massive Turkic nomadic migration towards the Islamic world. The first waves were recorded in the Kara-Khanid Khanate in 1017–18. It is unknown whether the Cumans conquered the Kipchaks or were simply the leaders of the Kipchak–Turkic tribes. By the 12th century, the two separate confederations of Cumans and Kipchaks merged.

The Mongols defeated the Alans after convincing the Kipchaks to desert them through pointing at their likeness in language and culture. Nonetheless, the Kipchaks were defeated next. Under khan Köten, Kipchaks fled to the Grand Principality of Kiev (the Ruthenians), where the Kipchaks had several marriage relations, one of which was Köten's son-in-law Mstislav Mstislavich of Galicia. The Ruthenians and Kipchaks forged an alliance against the Mongols, and met at the Dnieper to locate them. After an eight-day pursuit, they met at the Kalka River (1223). The Kipchaks, who were horse archers like the Mongols, served as the vanguard and scouts. The Mongols, who appeared to retreat, tricked the Ruthenian–Kipchak force into a trap after suddenly emerging behind the hills and surrounding them. The fleeing Kipchaks were closely pursued, and the Ruthenian camp was massacred.

The nomadic Kipchaks were the main targets of the Mongols when they crossed the Volga in 1236. The defeated Kipchaks mainly entered the Mongol ranks, while others fled westward. Köten led 40,000 families into Hungary, where King Bela IV granted them refuge in return for their Christianization. The refugee Kipchaks fled Hungary after Köten was murdered.

Kipchaks and Cumans spoke a Turkic language (Kipchak language, Cuman language) whose most important surviving record is the Codex Cumanicus, a late 13th-century dictionary of words in Kipchak, Cuman, and Latin. The presence in Egypt of Turkic-speaking Mamluks also stimulated the compilation of Kipchak/Cuman-Arabic dictionaries and grammars that are important in the study of several old Turkic languages.

When members of the Armenian diaspora moved from the Crimean peninsula to the Polish-Ukrainian borderland, at the end of the 13th century, they brought Kipchak, their adopted Turkic language, with them. During the 16th and the 17th centuries, the Turkic language among the Armenian communities of the Kipchak people was Armeno-Kipchak. They were settled in the Lviv and Kamianets-Podilskyi areas of what is now Ukraine.

The Cuman language became extinct in the 18th century in the region of Cumania in Hungary, which was its last stronghold.

The Kipchaks practiced Shamanism. Muslim conversion occurred near Islamic centres. Some Kipchaks and Cumans were known to have converted to Christianity around the 11th century, at the suggestion of the Georgians, as they allied in their conflicts against the Muslims. A great number were baptized at the request of Georgian King David IV, who also married a daughter of Kipchak Khan Otrok. From 1120, there was a Kipchak national Christian church and an important clergy. Following the Mongol conquest, Islam rose in popularity among the Kipchaks of the Golden Horde.

The confederation or tribal union which Kipchaks entered in the 8th- or beginning of 9th century as one of seven original tribes is known in historiography as that of the Kimek (or Kimäk). Turkic inscriptions do not mention the state with that name. 10th-century Hudud al-'Alam mentions the "country of Kīmāk", ruled by a khagan (king) who has eleven lieutenants that hold hereditary fiefs. Furthermore, Andar Az Khifchāq is mentioned as a country (nāḥiyat) of the Kīmāk, 'of which inhabitants resemble the Ghūz in some customs'.

In the 9th century Ibn Khordadbeh indicated that they held autonomy within the Kimek confederation. They entered the Kimek in the 8th- or beginning of 9th century, and were one of the seven original tribes. In the 10th-century's Hudud al-'Alam it is said that the Kimek appointed the Kipchak king.

The modern Northwestern branch of the Turkic languages is often referred to as the Kipchak branch. The languages in this branch are mostly considered to be descendants of the Kipchak language, and the people who speak them may likewise be referred to as Kipchak peoples. Some of the groups traditionally included are the Karachays, Siberian Tatars, Nogays, Bashkirs, Kazakhs, Kyrgyz, Volga Tatars, and Crimean Tatars. There is also a village named Kipchak in Crimea. Qypshaq, which is a development of "Kipchak" in the Kazakh language, is one of the constituent tribes of the Middle Horde confederation of the Kazakh people. The name Kipchak also occurs as a surname in Kazakhstan. Some of the descendants of the Kipchaks are the Bashkirian clan Qipsaq.

Retrieved from "https://en.wikipedia.org/w/index.php?title=Kipchaks&oldid=987519520"
Uses material from the Wikipedia article Kipchaks, released under the CC BY-SA 3.0 license.