The word "Elgygytgyn" means "white lake" in the Chukchi language.

The lake is of particular interest to scientists because it has never been covered by glaciers. This has allowed the uninterrupted build-up of 400 m (1,300 ft) of sediment at the bottom of the lake, recording information on prehistoric climate change. 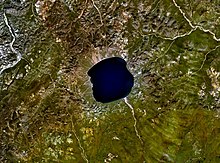 Landsat 7 satellite image of the lake

Lake El'gygytgyn is located in the Anadyr Plateau, part of the Anadyr Highlands. It is drained to the southeast by the Enmyvaam, a tributary of the Belaya. It is approximately 12 km (7 mi) in diameter and has a maximum depth of 174 ± 2 m (571 ± 7 ft). The lake is centered within an impact crater with a rim diameter of 18 km (11 mi) that formed 3.6 million years ago during the Pliocene. Before it was reliably dated, preliminary papers in the late 1970s suggested either Elgygytgyn or Zhamanshin as the source of the young Australasian strewnfield.

The conditions in the El'gygytgyn lake are extremely severe for fish life. Even so, there are three species permanently inhabiting the lake's harsh aquatic environment. These are three types of char: Salvelinus boganidae, S. elgyticus (Small-mouth char) and Salvethymus svetovidovi (long-finned char). The two latter species are endemic to the El'gygytgyn lake. The golets (Salvelinus alpinus, Russian: голец) has been introduced recently. Fish species in the lake are adapted to its very cold waters, which are generally just above the freezing point, and spend most of the year in total darkness. The surface is frozen for about 10 months of the year. It may start to melt in the summer, but some years it never fully thaws.