Lake Toba is the site of a supervolcanic eruption estimated at VEI 8 that occurred 69,000 to 77,000 years ago, representing a climate-changing event. Recent advances in dating methods suggest a more accurate identification of 74,000 years ago as the date. It is the largest-known explosive eruption on Earth in the last 25 million years. According to the Toba catastrophe theory, it had global consequences for human populations; it killed most humans living at that time and is believed to have created a population bottleneck in central east Africa and India, which affects the genetic make-up of the human worldwide population to the present. More recent studies have cast doubt on this theory and found no evidence of substantial changes in population.

It has been accepted that the eruption of Toba led to a volcanic winter with a worldwide decrease in temperature between 3 to 5 °C (5.4 to 9.0 °F), and up to 15 °C (27 °F) in higher latitudes. Additional studies in Lake Malawi in East Africa show significant amounts of ash being deposited from the Toba eruptions, even at that great distance, but little indication of a significant climatic effect in East Africa. 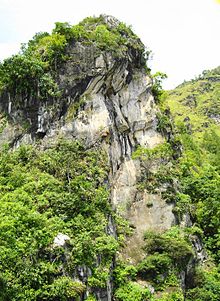 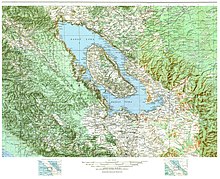 Map of the lake

The Toba caldera complex in North Sumatra comprises four overlapping volcanic craters that adjoin the Sumatran "volcanic front". At 100 by 30 kilometres (62 by 19 mi) it is the world's largest Quaternary caldera, and the fourth and youngest caldera. It intersects the three older calderas. An estimated 2,800 km3 (670 cu mi) of dense-rock equivalent pyroclastic material, known as the youngest Toba tuff, was released during one of the largest explosive volcanic eruptions in recent geological history. Following this eruption, a resurgent dome formed within the new caldera, joining two half-domes separated by a longitudinal graben.

At least four cones, four stratovolcanoes, and three craters are visible in the lake. The Tandukbenua cone on the northwestern edge of the caldera has only sparse vegetation, suggesting a young age of several hundred years. Also, the Pusubukit (Hill Center) volcano (1,971 m (6,467 ft) above sea level) on the south edge of the caldera is solfatarically active. 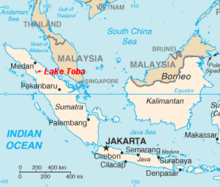 Location of Lake Toba shown in red on map

The Toba eruption (the Toba event) occurred at what is now Lake Toba about 73,700±300 years ago. It was the last in a series of at least four caldera-forming eruptions at this location, with the earlier known caldera having formed around 1.2 million years ago. This last eruption had an estimated VEI=8, making it the largest-known explosive volcanic eruption in the Quaternary.

Bill Rose and Craig Chesner of Michigan Technological University have estimated that the total amount of material released in the eruption was at least 2,800 km3 (670 cu mi)—about 2,000 km3 (480 cu mi) of ignimbrite that flowed over the ground, and approximately 800 km3 (190 cu mi) that fell as ash mostly to the west. However, as more outcrops become available, Toba possibly erupted 3,200 km3 (770 cu mi) of ignimbrite and co-ignimbrite. The pyroclastic flows of the eruption destroyed an area of least 20,000 km2 (7,700 sq mi), with ash deposits as thick as 600 m (2,000 ft) by the main vent. The eruption was large enough to have deposited an ash layer approximately 15 cm (6 in) thick over all of South Asia; at one site in central India, the Toba ash layer today is up to 6 m (20 ft) thick and parts of Malaysia were covered with 9 m (30 ft) of ash fall.

The subsequent collapse formed a caldera that filled with water, creating Lake Toba. The island in the center of the lake is formed by a resurgent dome. 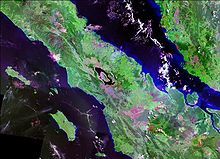 The exact year of the eruption is unknown, but the pattern of ash deposits suggests that it occurred during the northern summer because only the summer monsoon could have deposited Toba ashfall in the South China Sea. The eruption lasted perhaps two weeks, and the ensuing volcanic winter resulted in a decrease in average global temperatures by 3.0 to 3.5 °C (5 to 6 °F) for several years. Ice cores from Greenland record a pulse of starkly reduced levels of organic carbon sequestration. Very few plants or animals in southeast Asia would have survived, and it is possible that the eruption caused a planet-wide die-off. However, the global cooling has been discussed by Rampino and Self. Their conclusion is that the cooling had already started before Toba's eruption. This conclusion was supported by Lane and Zielinski who studied the lake-core from Africa and GISP2. They concluded that there was no volcanic winter after Toba eruption and that high H2SO4 deposits do not cause long-term effects. Furthermore, due to the low solubility of sulfur in the magma, the emission of volatiles and climate impacts are likely limited.

Evidence from studies of mitochondrial DNA suggests that humans may have passed through a genetic bottleneck around this time that reduced genetic diversity below what would be expected given the age of the species. According to the Toba catastrophe theory, proposed by Stanley H. Ambrose of the University of Illinois at Urbana–Champaign in 1998, the effects of the Toba eruption may have decreased the size of human populations to only a few tens of thousands of individuals. However, this hypothesis is not widely accepted because similar effects on other animal species have not been observed, and paleoanthropology suggests there was no population bottleneck. The genetic bottleneck is now recognized to be the Out-of-Africa founder effect, rather than an actual reduction in population.

Since the major eruption ~70,000 years ago, eruptions of smaller magnitude have also occurred at Toba. The small cone of Pusukbukit formed on the southwestern margin of the caldera and lava domes. The most recent eruption may have been at Tandukbenua on the northwestern caldera edge, suggested by a lack of vegetation that could be due to an eruption within the last few hundred years.

Some parts of the caldera have shown uplift due to partial refilling of the magma chamber, for example, pushing Samosir Island and the Uluan Peninsula above the surface of the lake. The lake sediments on Samosir Island show that it has risen by at least 450 m (1,476 ft) since the cataclysmic eruption. Such uplifts are common in very large calderas, apparently due to the upward pressure of below-ground magma. Toba is probably the largest resurgent caldera on Earth. Large earthquakes have recently occurred in the vicinity of the volcano, notably in 1987 along the southern shore of the lake at a depth of 11 km (6.8 mi). Such earthquakes have also been recorded in 1892, 1916, and 1920–1922.

Lake Toba lies near the Great Sumatran fault, which runs along the centre of Sumatra in the Sumatra Fracture Zone. The volcanoes of Sumatra and Java are part of the Sunda Arc, a result of the northeasterly movement of the Indo-Australian Plate, which is sliding under the eastward-moving Eurasian Plate. The subduction zone in this area is very active: the seabed near the west coast of Sumatra has had several major earthquakes since 1995, including the 9.1 2004 Indian Ocean earthquake and the 8.7 2005 Nias–Simeulue earthquake, the epicenters of which were around 300 km (190 mi) from Toba. 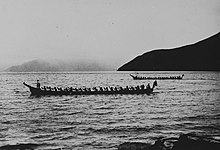 Batak canoes near Haranggaol on Lake Toba (circa 1920)

Most of the people who live around Lake Toba are ethnically Bataks. Traditional Batak houses are noted for their distinctive roofs (which curve upwards at each end, as a boat's hull does) and their colorful decor.

On 18 June 2018, Lake Toba was the scene of a ferry disaster, in which over 190 people drowned. MV Sinar Bangun was an irregular operating vessel on the lake which capsized with many passengers on board. The incident caused the death of 190 people and injuries to a number of others. Preliminary reports found the vessel was in operation with irregularities. Ignoring overloading on the vessel and operating in rough weather conditions were concluded as the main reasons leading to the disaster. Around 50 cars and 100 motorbikes, which were aboard, also sank into the lake on that day.