Unlike the existing Lanxin railway, which runs entirely in Gansu and Xinjiang, the new high-speed rail is routed from Lanzhou to Xining in Qinghai Province before heading northwest across the Qilian Mountains into the Hexi Corridor at Zhangye. The rail tracks in the section near Qilianshan No. 2 Tunnel is at 3,607 metres (11,834 ft) above sea level, making it the highest high-speed rail track in the world. 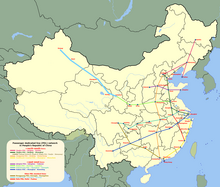 Lanzhou–Xinjiang high-speed railway is shown on the map as light-blue color line.

The first high speed train traveled over this line on June 3, 2014. This was a test train with a media contingent with full revenue service not due to start until the end of 2014. The first segment of the line, the Ürümqi-Qumul part, was inaugurated on November 16, 2014. This high-speed railway segment is the first ever railway of that kind to ever exist in the Xinjiang autonomous region. The rest of the line opened on December 26, 2014. The line cuts train travel time between the two cities from 20 hours to 12 hours.

Near Shanshan, the railway passes through the hundred-li wind zone, where desert wind constantly blows most days of a year. In 2007, strong wind overturned a train on the southern branch of Lanxin Railway, and four people were killed. A 67 kilometres (42 mi) long wind-protection gallery has been built next to the tracks in this region.

Many sections of the line have experienced roadbed settlement, deformation, subsidence, frost heave, and cracking of the concrete of the track bed caused by saline soil, large temperature differences, and extremely low temperatures.

The 3769 meters long Zhangjiazhuang Tunnel, located between Minhe South and Ledu South stations was damaged several times during operation. The tunnel is embedded in mudstone, interbedded with sandstone and gypsum rock. The top covering soil layer is loess. In 2016, the tunnel was damaged twice, closing the line for 3 months. After reopening, the operation speed in the tunnel was limited to 60 kilometres per hour (37 mph). On December 24 2018, the mountain above the tunnel deformed, but trains could initially continue operating. However, the next day, after further deformation, the tunnel was closed for thorough inspection. Due to repair works, the line was closed between Lanzhou and Xining until October 11 2020. Trains were routed over the lower speed Lanzhou–Qinghai railway.